Grab another cup of coffee…or a Mai Tai, if it’s that time of day…and sit back for a nice virtual ride. Today Palm Springs Stephan is treating us a to a guided tour of some of the most wonderful midcentury modern homes in his fair city — with his wonderful commentary.

This first is one of my favorites. It is an original Alexander house. (Wikipedia, which is notoriously unreliable, has an uncharacteristically accurate description of the Alexander Construction Company.) It has the “butterfly roof” so sought after by mid century preservationists locally. And a stunning view from the front yard!

Next, we have a tour of El Rancho Vista Estates. El Rancho was built in the late 1950s by Roy Fey, a former accountant from Chicago who came to PS and began a small real estate development empire. He worked with some of the most prominent architects of the Southern California Modernist movement, especially Donald Wexler. This little subdivision is carved into what is now the northeast corner of the Palm Springs International Airport property, giving it significant noise issues. But back in the day, it was out in the middle of nowhere. It remains largely intact, to the extent that some of the houses are falling into decay. Others have been purchased by preservation minded folks and been significantly rehabilitated. The better preserved homes carry enormous price tags, even with the current real estate market “reversal,” as the real estate flyer above indicates. 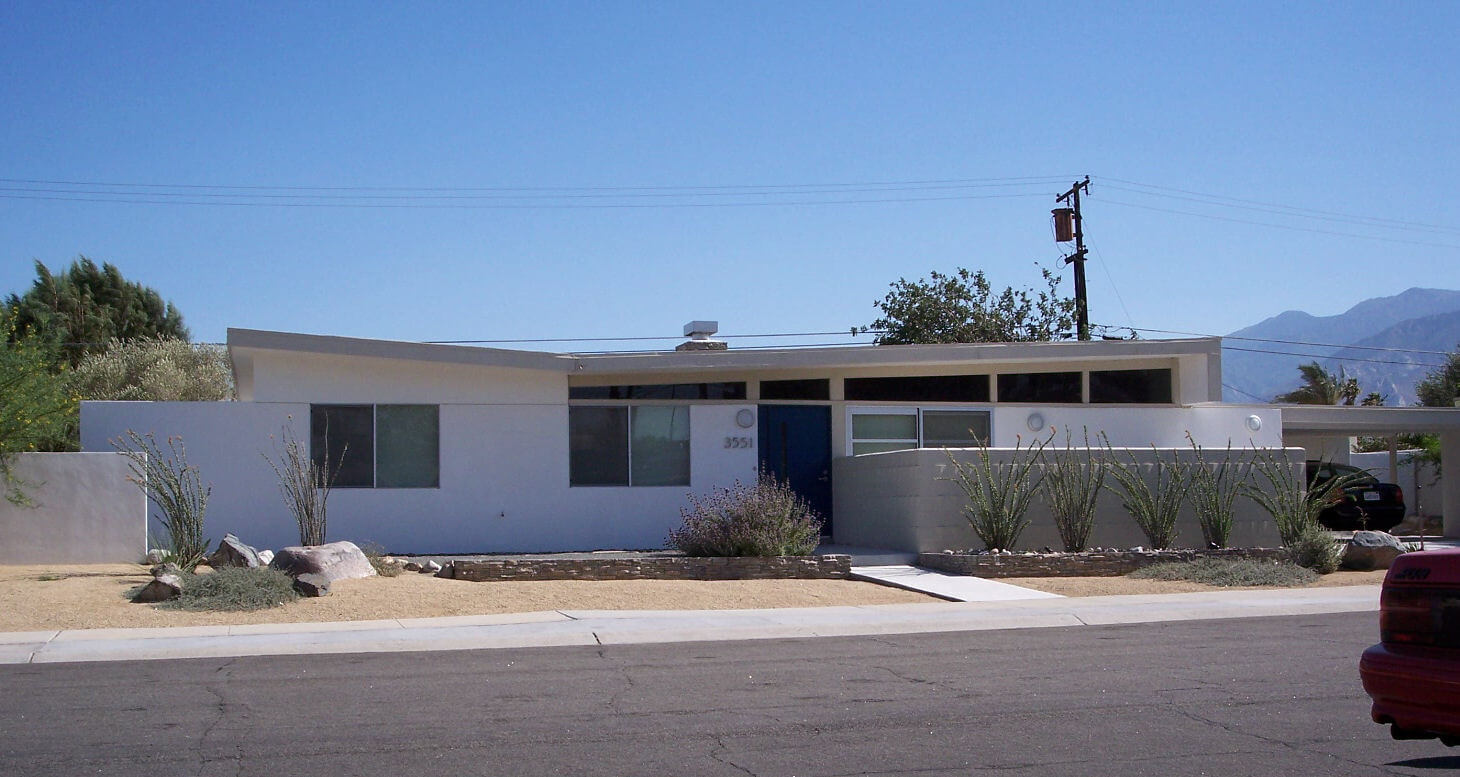 El Rancho Vista offers several different roof lines styles to choose from. The butterfly roof is still the most common and most sought after as quintessentially “mid-century modern.”

3551 East Avenida Fey Norte offers the clearest example of butterfly roof design, though the owner has chosen to downplay the effect with a washed out color scheme. The landscape design, called xeroscaping, consumes little valuable water and is appropriate for our desert environment. 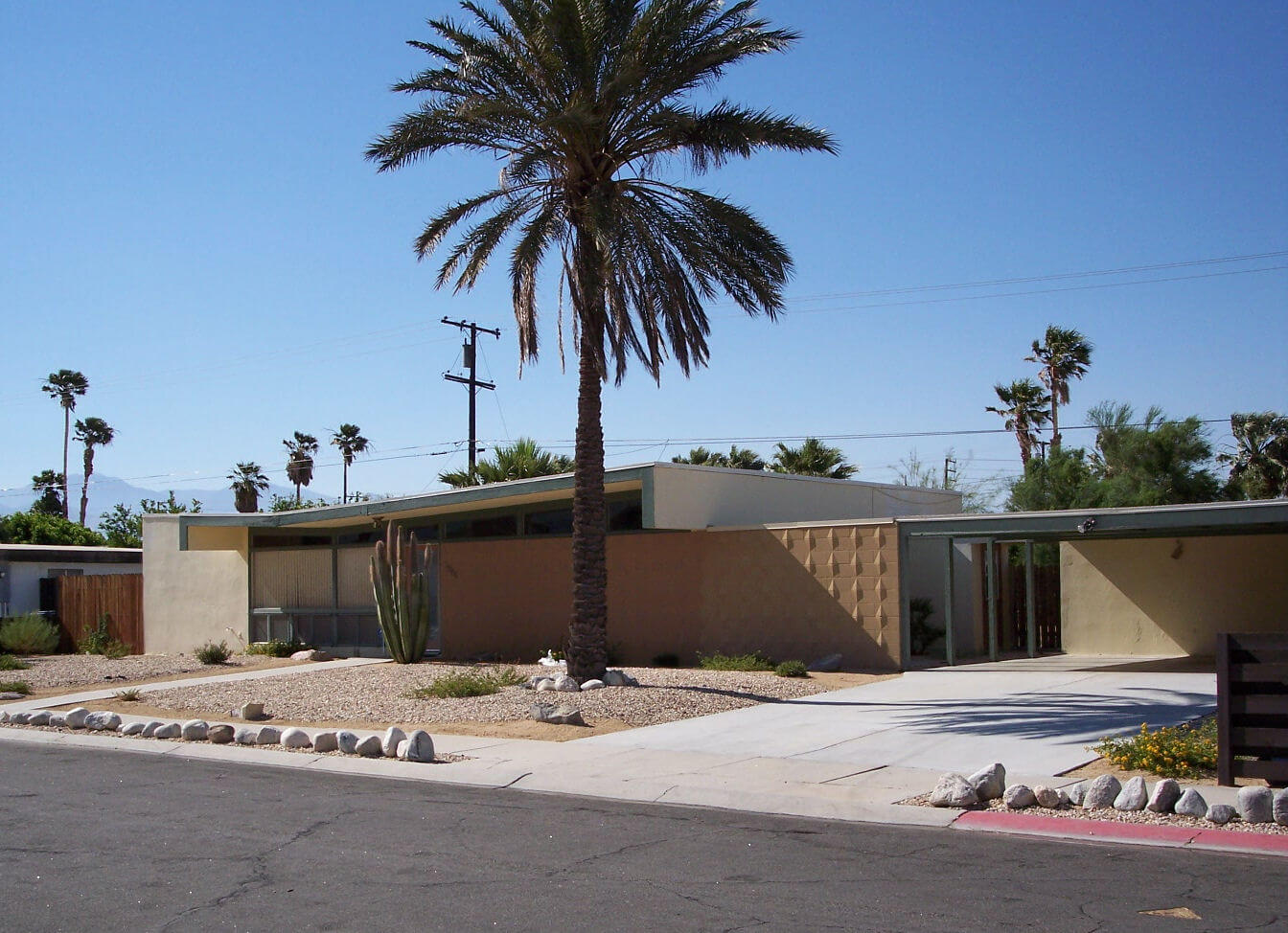 This second butterfly roof, also on East Avenida Fey Norte, tops a west-facing facade containing large expanses of glass to maximize views of the mountains. It also has a wall constructed high-relief diamond-patterned concrete blocks enclosing a side garden. These diamond blocks were used extensively throughout the Palm Springs area during the 1950s and 1960s and are emblematic of SoCal MCM design. 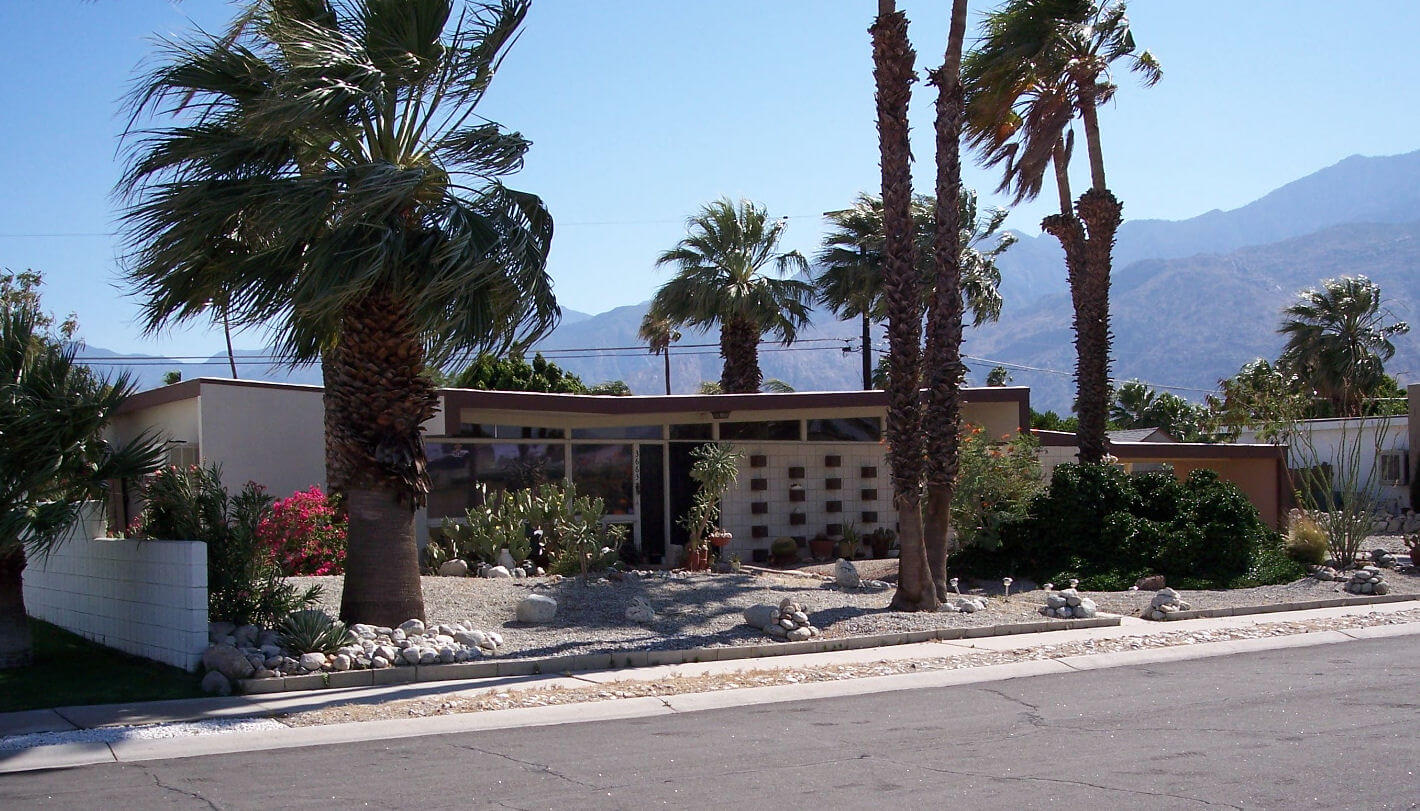 Just across the street from the house with diamond bricks we find a different but equally common wall treatment: square blocks protruding out of the wall, creating a more aggressively textured effect. The homeowner here has maximized the effect through careful color choices and accents. The xeroscaping is still eco-friendly but more lush appearing. Even the bouganvillea at the left end of the house consumes minimal water while offering intense Mamie-pink color. 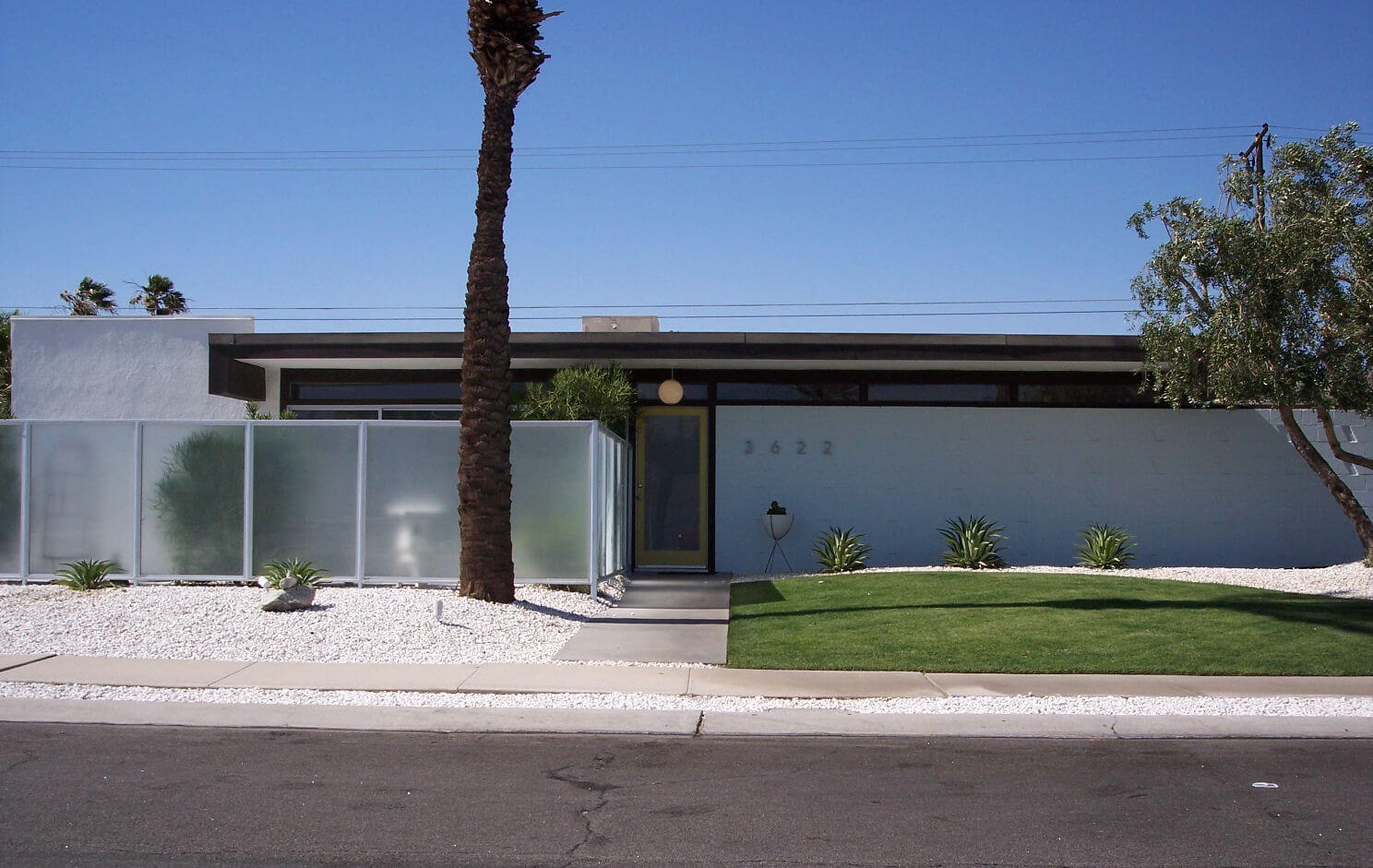 Flat roofs are also common in Palm Springs. When originally built, they were often generously covered with 1″-2″ pieces of white chip rock to reflect the heat, since many of these homes were not originally air-conditioned. With summer temps regularly into the 110s, every measure was taken to keep cool! Most are now covered with thick layers of sprayed-on expansion foam and
over-painted with reflective aluminum paint. The plexiglass and aluminum wall enclosing the front garden is a popular modern interpretation of mid-century design.
Note the conflicted landscaping … half water-consuming manicured grass and half white chip rock (perhaps scraped off the roof?). 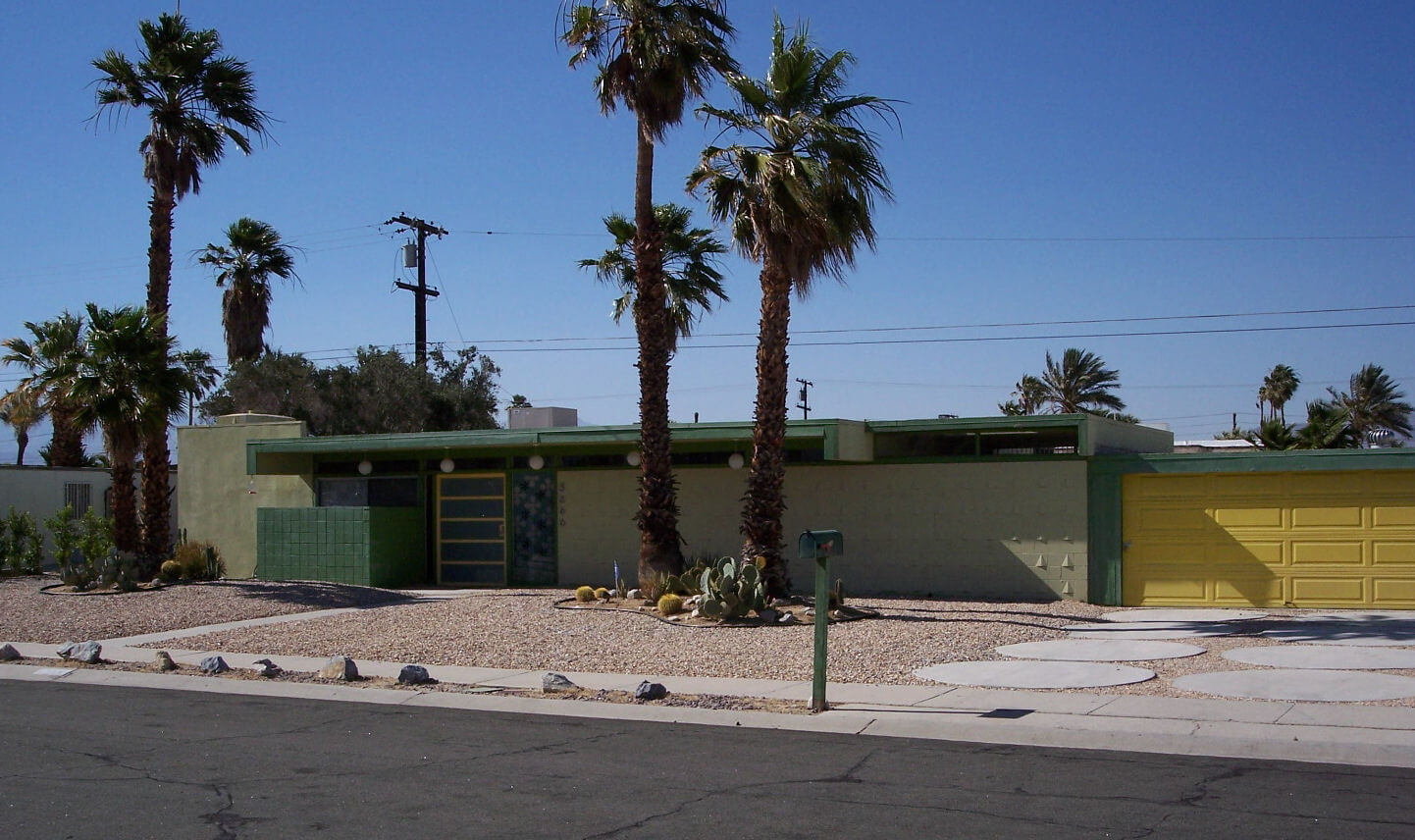 This house is actually one of my favorites because its owner has remained mostly true to the house’s original aesthetic. The west-facing facade is largely windowless to prevent afternoon overheating, though the back wall is almost certainly largely glass. Note the string of white globe lights! Barely visible in the front window next to the door is a curtain of strings of beads in a pop-art flower design. Unfortunately, the owner fell short with the garage door … a modern aluminum design that could still be “mid-century-ized” with some color accents. 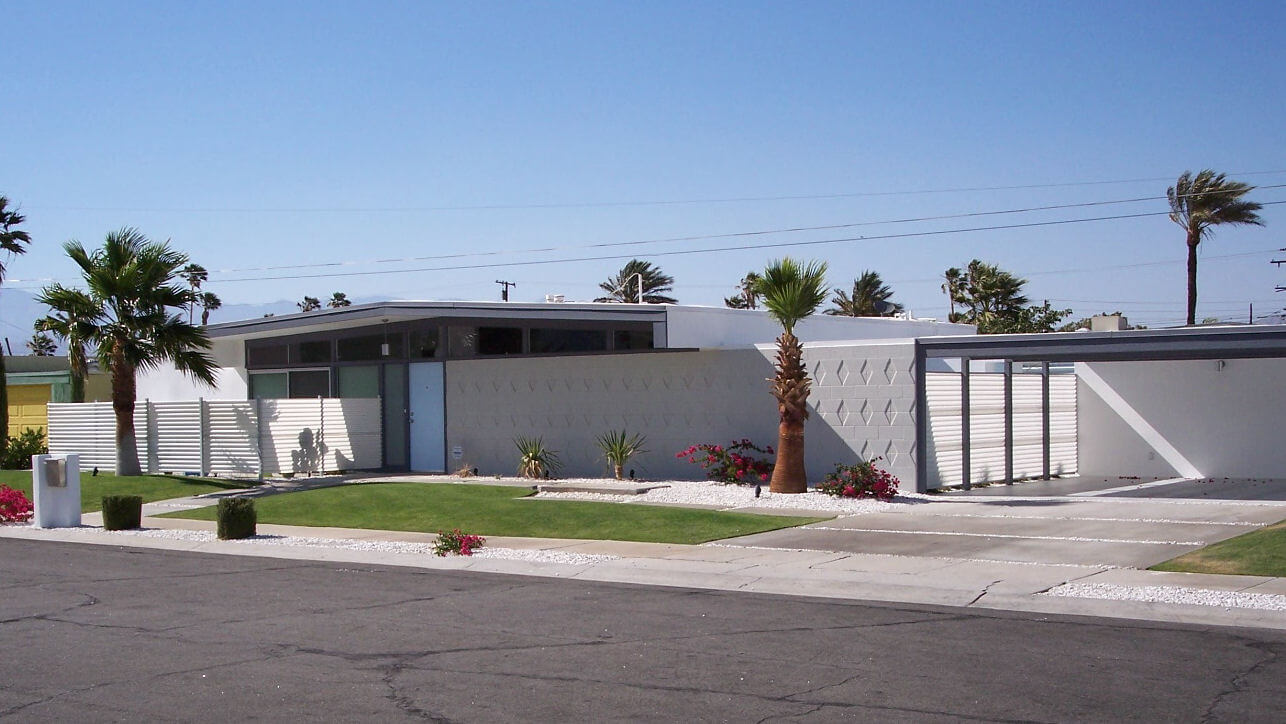 Peaked rooflines are also seen in El Rancho Vista and in Palm Springs, though the slope is very shallow. This example also has a variation on the diamond-patterned facade blocks, with the diamonds recessed rather than protruding. The ubiquitous “carport” of the 1950s is also nicely highlighted in this photo. 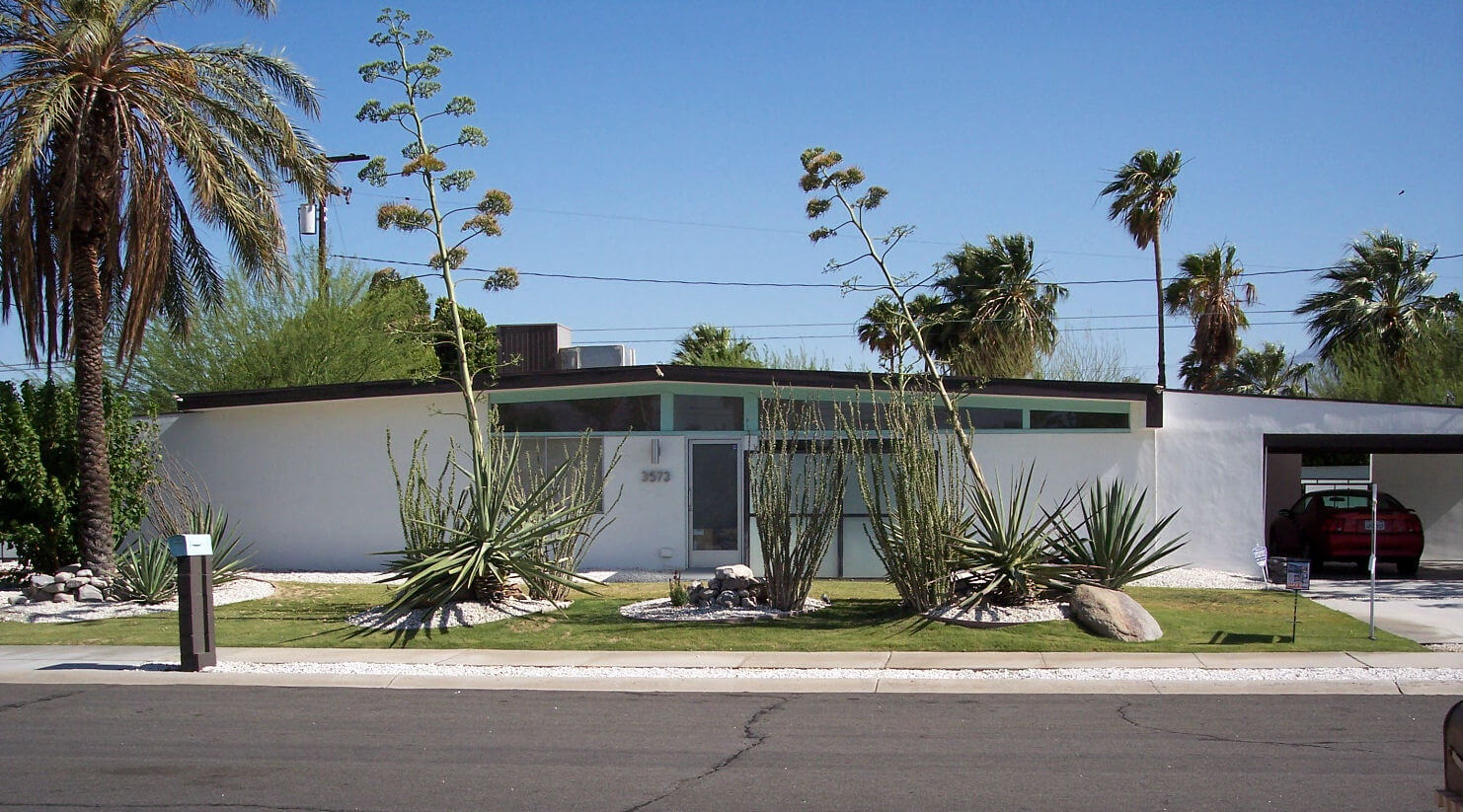 3573 el rancho vista – Another peaked roof in El Rancho Vista, with a trim color choice that accents the roofline. The concrete block mailbox support is a nice touch, too. 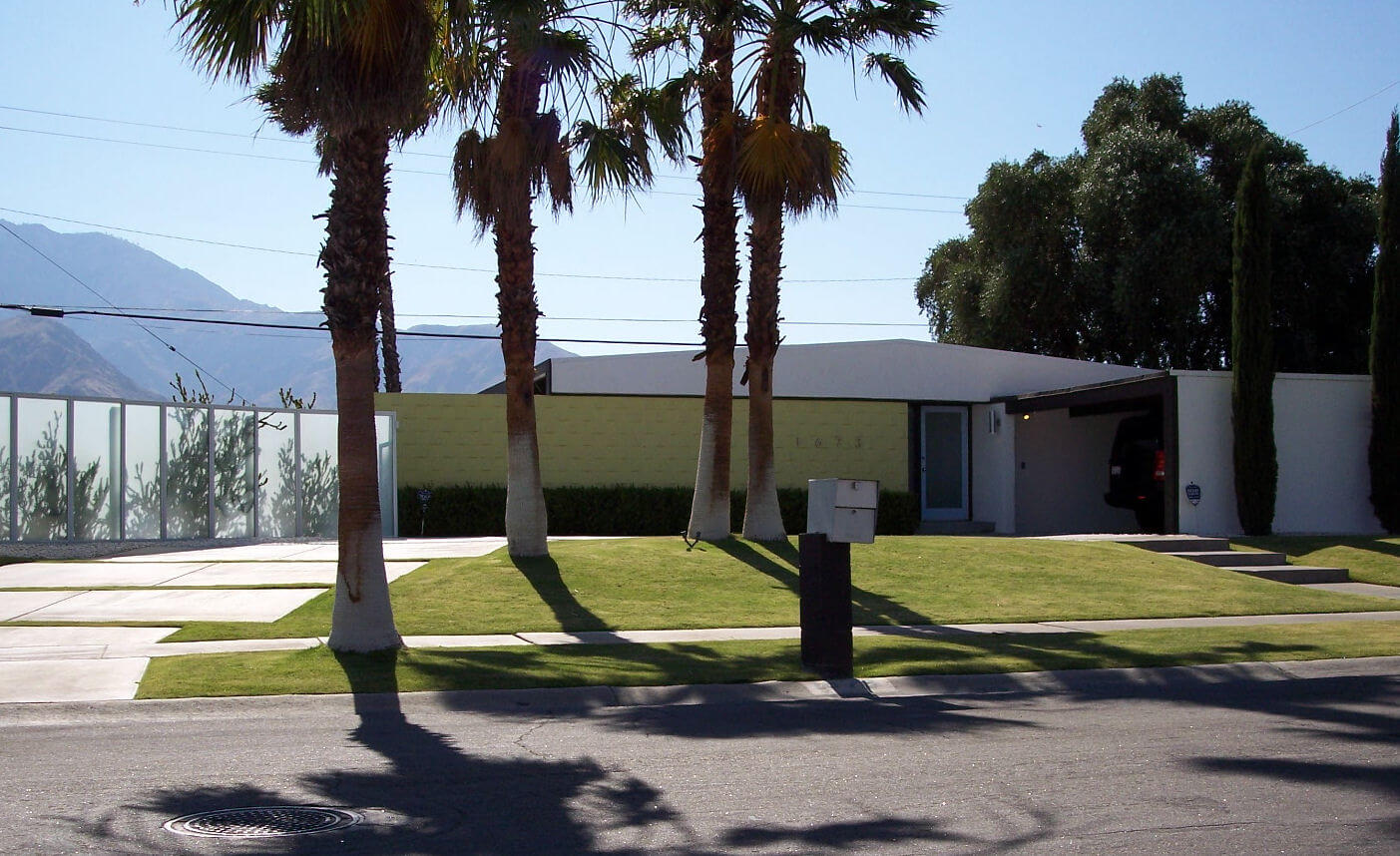 1673 Roberto Miguel As we leave El Rancho Vista Estates, we encounter an example of a MCM house that has been entirely re-interpreted in 21st century terms. Its owner retained most of the basic MCM design elements but camouflaged them with greenery and plexiglass walls. This house makes me sad. 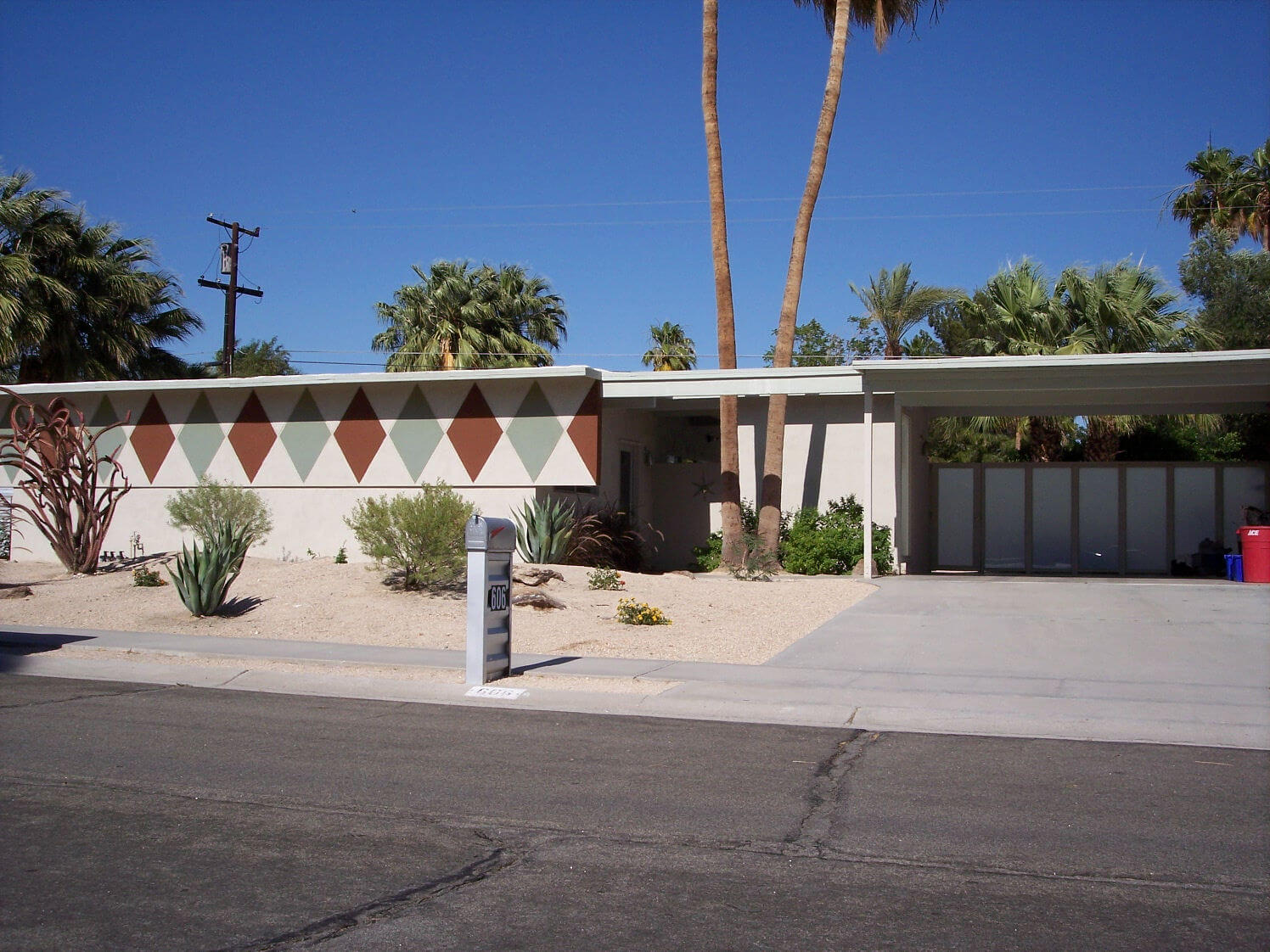 But rejoice! Screamingly authentic mid-century design thrives just a half-mile away on North Monterey Road! The neighborhood, bordering the western edge of the airport property, is an enclave of high-end MCM design, most of which are well-preserved and carry price tags above $750,000. This is the area of town where many of the Hollywood elite of the 1950s built or bought homes.

This first house offers a startling interpretation of the diamond-patterned facade, accented by vivid color choices. 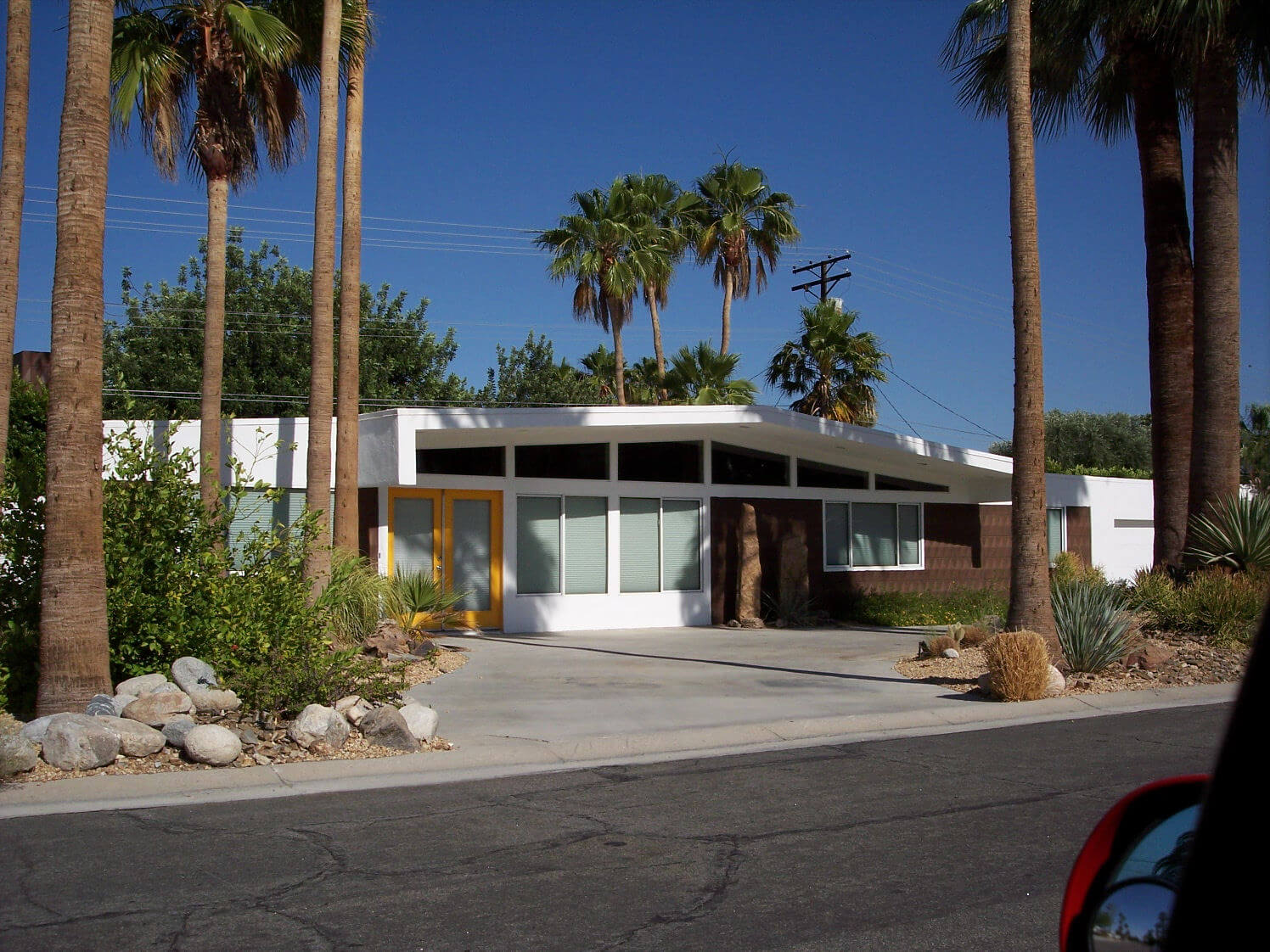 Back to the high-relief diamond patterned block wall, but this time the current owner has placed a pair of standing rocks in front of the wall to add interest. The ochre frame to the entryway adds some needed color. This is a million-dollar property. 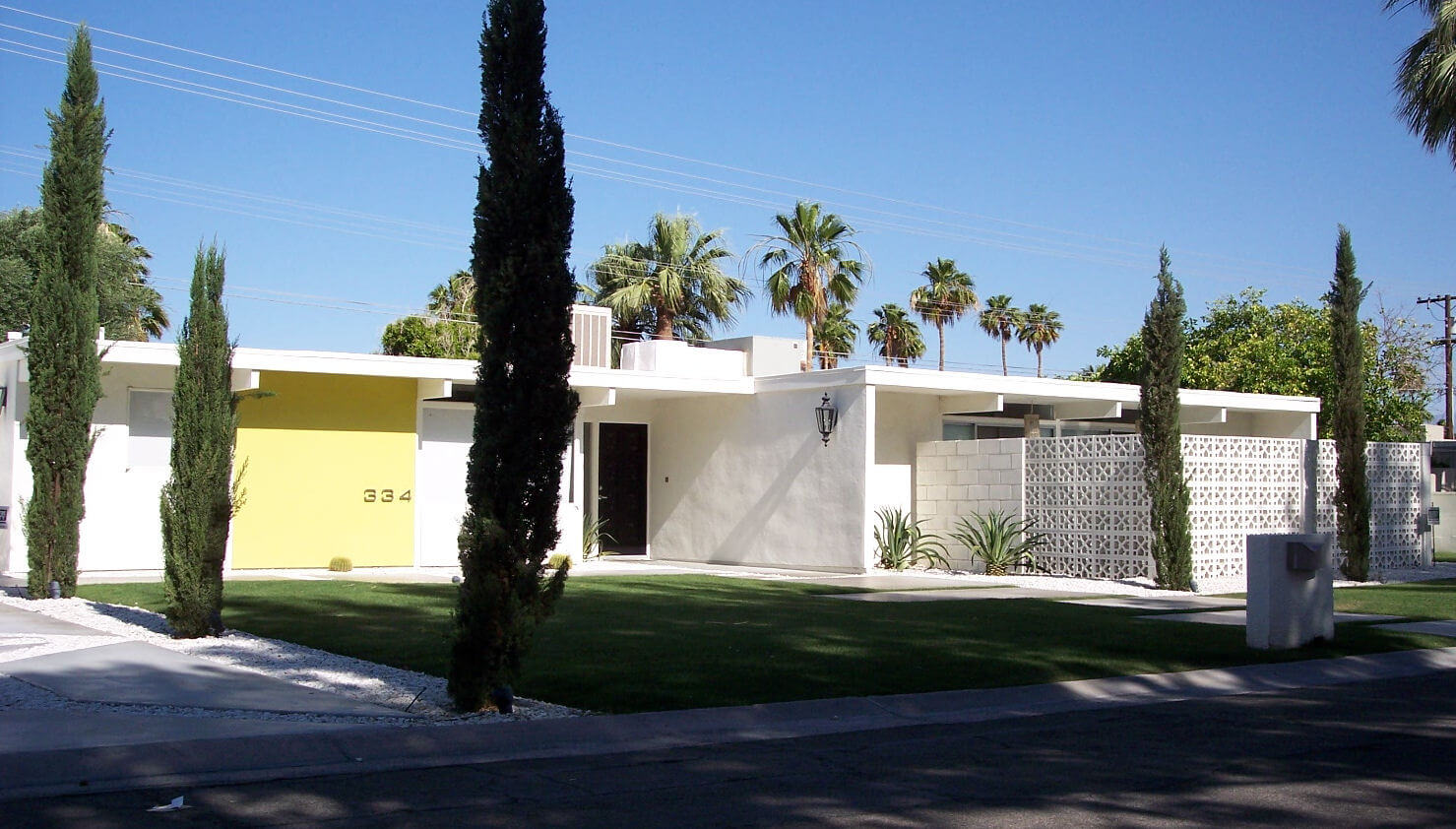 334 N Monterey is one of my favorite houses in all of PS. The new driveway plays nicely off the original open lattice garden wall. The tall thin cedars give it a Hollywood effect, while the house numbers have an authentic MCM look to them. If only the owner would replace that Early American coach lamp with a brushed aluminum hourglass wall sconce! 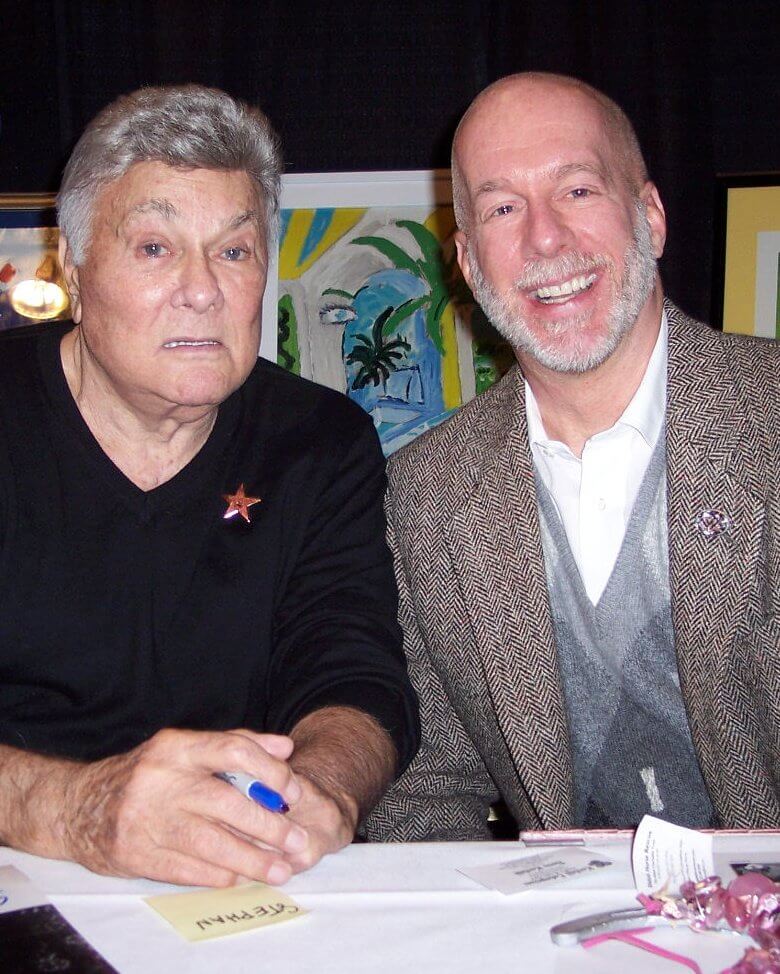 And voila – here is a photo of Stephan with Tony Curtis (who once owned Stephan’s condo building) at an event in Palm Springs last fall. So that mystery is solved, we now know what you look like, PSS!

What is there to say for this great post — but THANK YOU, Stephan!