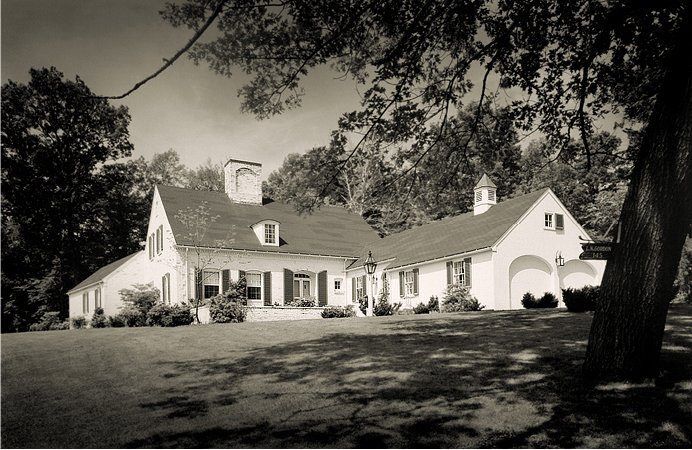 A new reader – another Pam – wrote recently to tell me about her Royal Barry Wills home north of Boston and to ask me some kitchen questions. Meanwhile, she has turned me on to this amazing designer – whose Cape Cods and colonials were just as important and influential in postwar design history as any modernists. For today’s Sunday reading, here’s a essay by Richard Guy Wilson, which I’ve continued via a link to the Royal Barry Wills design firm, which still operates today:

The most popular architect among the American middle class after World War II employed three names —and it was not Frank Lloyd Wright but Royal Barry Wills. Life magazine in 1946 anointed Wills as creating “the kind of house most Americans want,” because his books sold more than 520,000 copies, and he had designed some 1,100 houses. Earlier, in 1938, Wills had dueled with Wright in a Life magazine contest over houses for the middle class. Wright entered one of his Usonian designs and Wills showed a Cape Cod house. Although the family initially favored Wright, they selected Wills in the end and built his Cape Cod design.12

Houses designed or influenced by Royal Barry Wills were ubiquitous, as Americans devoured his books, discovered his designs in homemaker and housebuilding magazines and newspapers, and either bought his plans or contacted him for a custom design. By the time of his death, in 1962, Wills and his firm were responsible for more than 2,500 houses. Wills was so popular that a writer for the Saturday Evening Post in 1958 observed: “Many a would-be home owner, surveying the infinite variations of Mr. Wills’s Cape Codders in plan books and magazines has concluded that he is the man who somehow-invented-the-design.