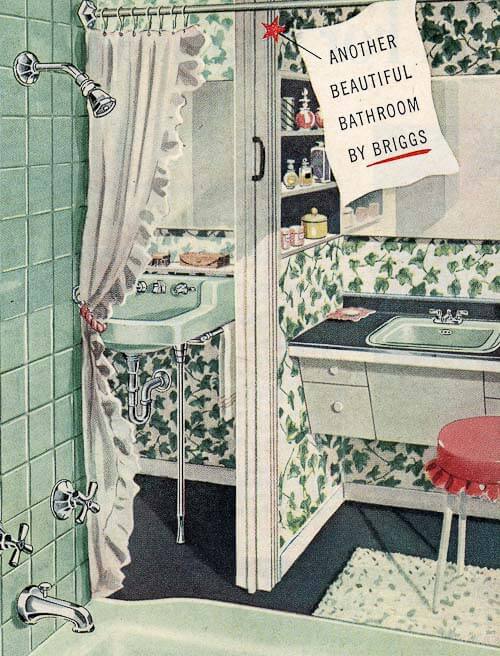 These 1949 Briggs bathroom fixtures — tub, sinks and toilet — are the same design that I had in all three of my original 1951 bathrooms. And: I had two bathrooms full of this green. In fact, I tend to believe that this shade of green was #2 in popularity behind Mamie Pink throughout most of the 1950s. But let’s get all scientific-like and start collecting data. Henceforth, I invite you to take our two official polls, which seek to answer the urgent question: What were the most popular tile and bathroom fixture colors for mid-century bathrooms?
.

Also, please feel free to leave a comment with more information about your original bathroom(s). It’s for Science, mind you. Thanks for playing!
Categoriesbathroom tile help & ideas

Nancy is the official reader representative on the  Save the Pink Bathrooms website. I really needed a reader to help me illustrate our quest… I..
Read More
H

After asking for help in finding towel bars to fit a vintage china bathroom sink, Melita saw the photos I posted and realized she had..
Read More
V

So I had the bathroom clean… I put on makeup… The good camera was all set up on the big tripod… and DH was on..
Read More