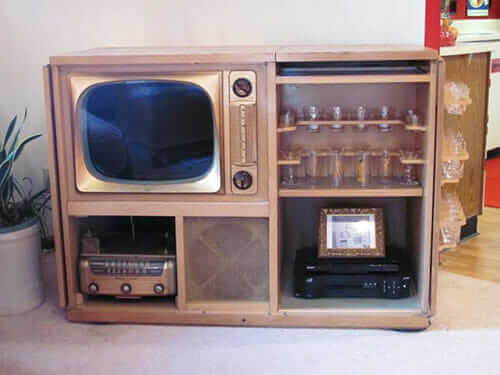 Do you love the look of vintage TV sets, but actually want to watch be able to use them to watch the full range of programming available today? Greg and Tammy found a rare and wonderful 1951 Admiral Tele-Bar — and retrofitted the television portion to hold a 24″ flat screen TV. Now they can truly enjoy this amazing vintage television every single day. Read on for their story.


What could be more useful than a television, record player, bar cabinet and trash can all in one? Readers Greg and Tammy (of the fabulous 1953 Kelvinator refrigerator freezer) had been drooling over this vintage Admiral Tele-Bar — found at a local antique store — for about a year before they finally decided to pull the trigger and bring it home.

Thought you would get a kick out of this. We recently bought what we discovered to be a 1951 Admiral Tele-Bar. It is a factory built entertainment center featuring a 21” black & White TV, AM-FM record player, 10″ speaker, complete with a built in lockable bar featuring 32 glasses, a serving tray and trash receptacle. It appears to have been made just one year. It cost a whopping $895 in ’51 when the average price of a new car was $1,800! Like spending $10K on a similar item today. Only about 23% of the U.S. population had TV’s in 1951. It interestingly has a socket for a color adapter!

We had been looking at it at an antique store in Ohio for around a year. We thought it was really cool, but didn’t know what we would do with it. We joked about the cool swinging couple who must have owned it. It has a sort of “Austin Powers” feel.

I really liked it, but wasn’t sure if we would put our modern 42” flat screen on it or? I didn’t want to make a fish bowl or something like that. I thought maybe I could get the old TV working, but we live out in the country in a deep river valley with NO antenna connection.

In the end, to make it a usable, practical 1950’s item (like our kitchen—remember our Kelvinator Foodarama, Tappan stove & custom built-in oven), I measured carefully and found a that a 24” flat screen would fit adequately. We were worried the screen would be “too small” after having big TV’s over the years, but it was one of the best decisions we ever made. It is our full time, everyday TV. I like looking at the Tele-Bar as much as the TV! Our 14-year-old son ended up with our 42” flat screen.

The Tele-Bar itself is in good shape. The original finish looks great except for some glass stains on the top. We may refinish that portion.  The bar is missing just two of the original glasses, supplemented with four period “girly glasses.”  The bottom “bar” portion serves as a perfect place for satellite receiver and DVD player. The trash receptacle serves as a DVD storage area.

Thought you might enjoy yet another 1950’s addition to our house. Now on the lookout for a mid century sectional!

One of the Admiral Tele-Bar advertisements that Greg and Tammy pointed us to on the intertubes reads:

It’s here! The one and only Tele-Bar…Admiral’s new, exciting, unique, and revolutionary television-bar combination. Now…21″ TV, Dynamagic Radio, and the incomparable “Triple-Play” Phonograph…all combined in one great home entertainment ensemble for gracious living.

Tele-Bar enhances every occasion! Its exquisite, hand-rubbed, liquor-proof cabinet provides a stainless steel mixing tray, liquor-proof serving shelf, “empties” receptacle, and racks for 32 glasses. Lower compartment holds over 30 bottles. For those who entertain regularly…Tele-Bar is an indispensable aid and a practical investment. Glasses included at no extra charge.

I suppose this must have been the Rolls Royce of television sets back in 1951. Since it holds 30 bottles of liquor and 32 glasses — it would be easy to have all your neighbors over to watch TV. And as Greg and Tammy mention, since less than one-quarter of all Americans had a television in their home, those with a TV were immediately popular.

It is funny to note that the cabinet is described as “liquor proof” — even though it holds quite an amount. That must be in reference to the finish being impervious to water marks.

It was pretty ingenious to stick a flat screen TV behind the old frame — and using the liquor storage area for your cable box — perfect. Greg & Tammy — I’ll keep my fingers crossed that you find the perfect mid century sectional sofa to accompany your Tele-Bar soon — until then — thanks so much for sharing this fun story and photos with us.