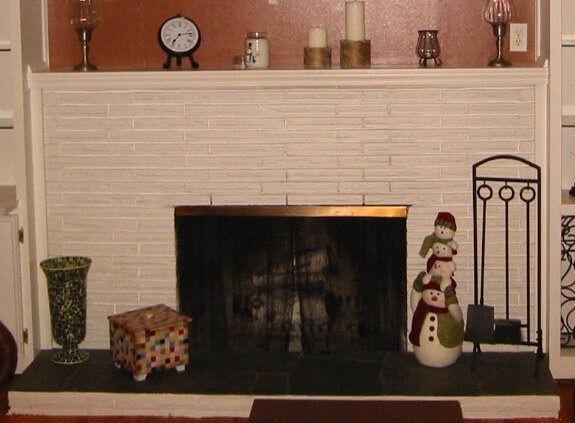 I love your website.  It is truly one of the most valuable resources for a mid-century home owner…keep up the amazing work!

Anyway, I’m writing to ask you a strange question, and any answer you may have will assist me in making some decisions with regard to a future restoration project in my 1958 living room.  I am wondering if you have any ideas about how often (if ever) roman brick fireplaces were painted in the 1950s.  Was it a fairly common practice to paint over the bricks as soon as they were installed?

Normally, I would just assume that a previous owner painted over the brick years later to change the look.  However, over the last several months, I have noticed that every roman brick fireplace I’ve seen in homes throughout my neighborhood is painted.  Same color, same texture, everything exactly like mine.  Could this paint be original to the homes’ design, or did painting one’s fireplace become such a big trend later on, that everyone was doing it.

I live in Spokane, Washington.  The fireplace photo I’ve attached was taken quite awhile ago, but should give you a pretty good view of what I’m talking about.  The other two attachments are pictures of “roman bricks” (actually, I snagged one photo from 1951 Ranch Redo’s site).  Apparently, they were a fairly popular brick choice in the 1950s, although this popularity may have been pretty specific to the Pacific Northwest, I’m not sure.  Every fireplace/chimney in my neighborhood (a housing development containing homes built exclusively between 1955 and 1963) is constructed of these bricks, and every one that I’ve seen is painted white, exactly like mine.

Strange question, I know, but thought you may have some info.  Thanks so much, I’m excited to see what you may be able to find out.  Take care.

It’s nice to hear from you, Chris, with this interesting question. Hmmm. I am not sure of the answer. I will keep an eye out when looking at periodicals from the period. Meanwhile, initial thoughts:

Sorry I could not be more definitive in my help. As I try to say often, I am not an academic expert, just an enthusiastic blogger.

As usual – I welcome all readers’ thoughts on this!