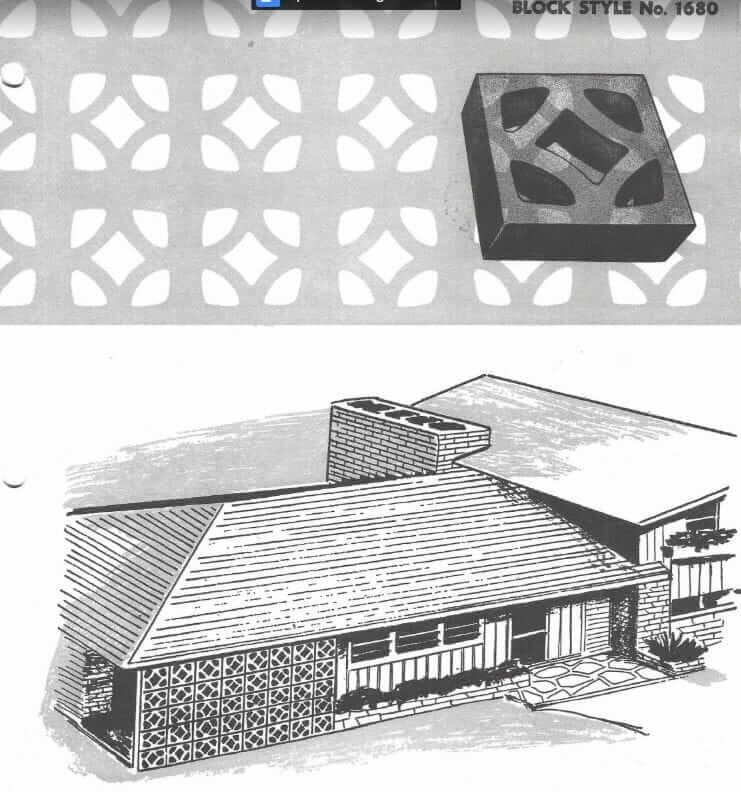 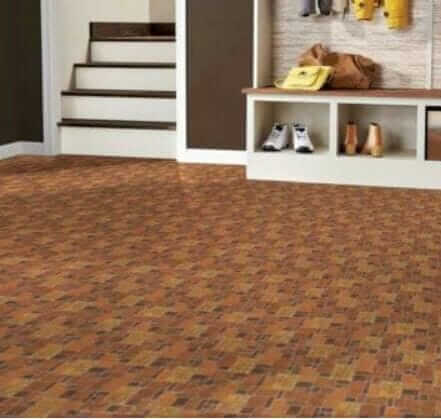 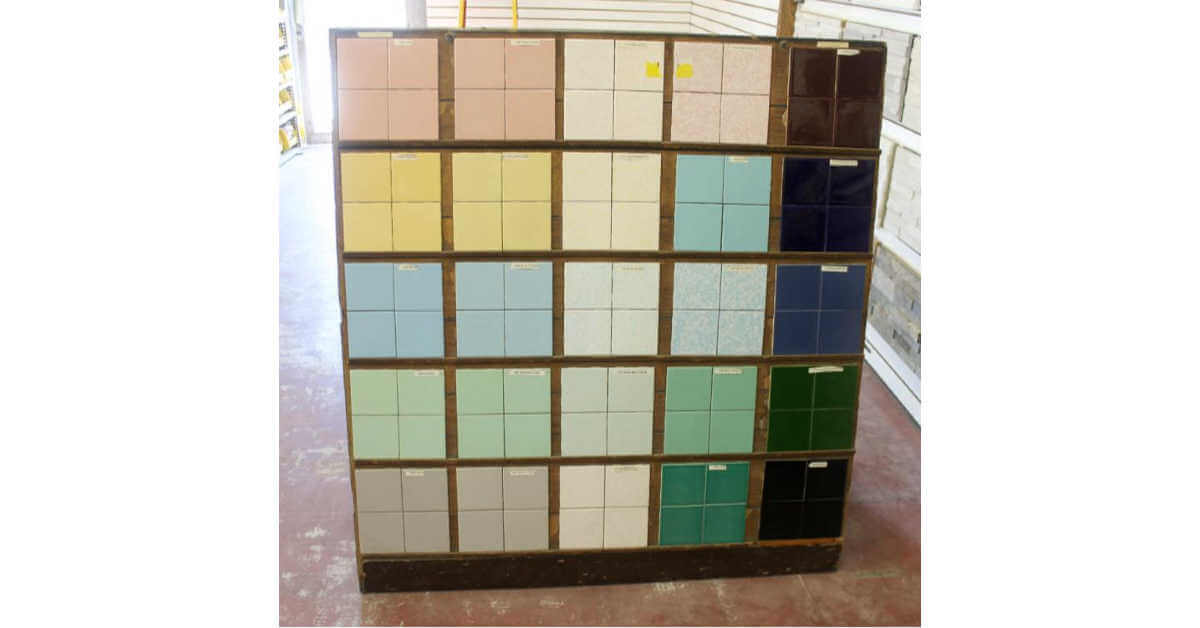 Update: I’m taking a summertime break from the blog to do all manner of cleaning / finishing unfinished projects / tackling to-do lists — you know what I mean. Moreover, I’m spending time with family during this very disrupted period. I’ll continue to monitor comments, and may post new stories depending on what comes up. Meanwhile: Enjoy the archive of 3,000+ stories (!) — dive into the categories and subcategories — and take care and stay safe, everyone! 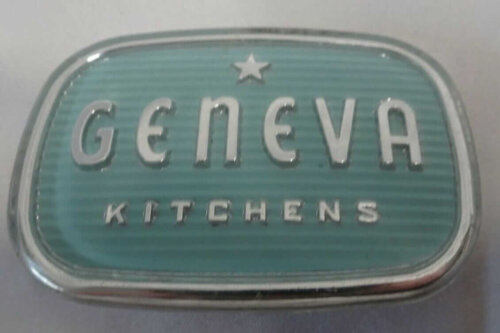 Lookie what just showed up on ebay >> New Old Stock Geneva kitchen cabinet emblem badges <<! Update: These sold out soon after I published the story. END_OF_DOCUMENT_TOKEN_TO_BE_REPLACED 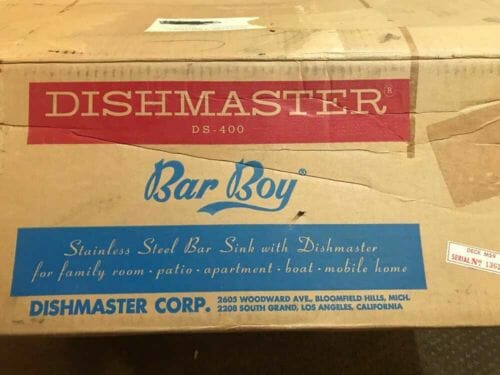 We love our Dishmasters — vintage and new —  and now, look at this rarity: A Dishmaster Bar Boy — a stainless steel bar sink packaged complete with M-59 Dishmaster faucet, unused and still in its original box now for sale by junqluv on ebay. “For family room, patio, apartment, boat, mobile home” — some fun was going on! 13 years of blogging the retro, and about 10 years of watching for Dishmasters, I’ve never seen this before. Let’s take a look inside >> END_OF_DOCUMENT_TOKEN_TO_BE_REPLACED

Good news here in Retro Renovation land: After a few years off the market, Daltile’s Mosaic Designer Tool is back. And more good news: The selections continue to include some of our favorite retro colors including Aqua Glow and Spa, which are also pretty easy to get as matchy matchy 4×4(ish) wall tiles including from Home Depot. END_OF_DOCUMENT_TOKEN_TO_BE_REPLACED

“We eventually realized that we should do a kitchen that would make us happy, and that silly Brady kitchen always made us happy.” 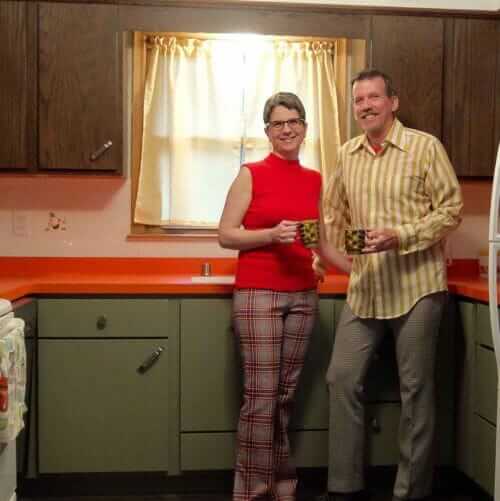 In what’s certain to become a classic here on the blog: Duane and Wendy have recreated much of the Brady Bunch kitchen in their home, right down to Mike and Carol’s coffee cups. When I asked if they’d like to send a photo of themselves as well, they even got out their plaid double knit bell bottoms! Such a happy, creative story! Let’s take a look at their delightful kitchen project. >> END_OF_DOCUMENT_TOKEN_TO_BE_REPLACED 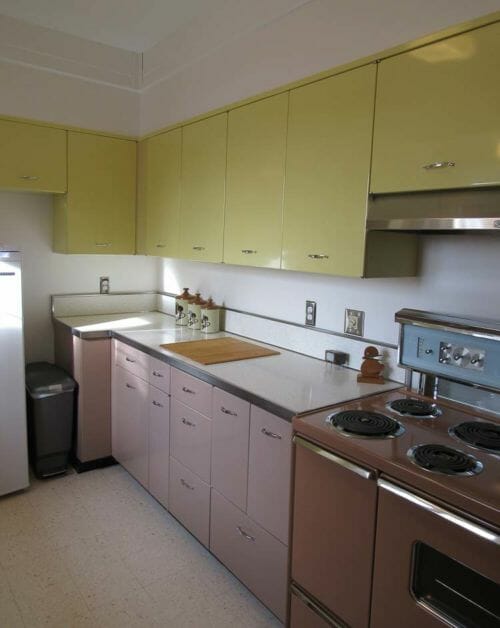 Time capsule eyed candy today: Reader Carol bought a 1956 house that came with a second kitchen that was barely used. The original Geneva steel kitchen cabinets were installed in an a catchy beige and yellow color combination. And, the cabinets include lots of extras. Let’s take a look! END_OF_DOCUMENT_TOKEN_TO_BE_REPLACED 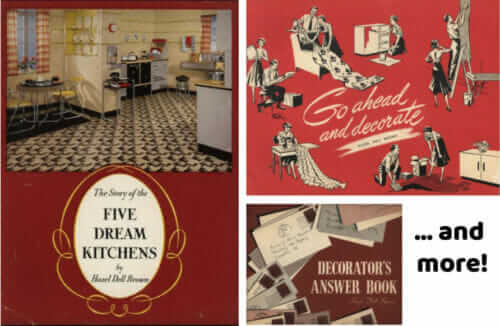 Yesterday I published a history of Hazel Dell Brown, including why I believe she is the most influential interior decorator of the 20th Century. Today as follow-up, take a look for yourself at scores of her room designs, captured in catalogs from 1929-1951. Perhaps you will find some great ideas for your own home! END_OF_DOCUMENT_TOKEN_TO_BE_REPLACED 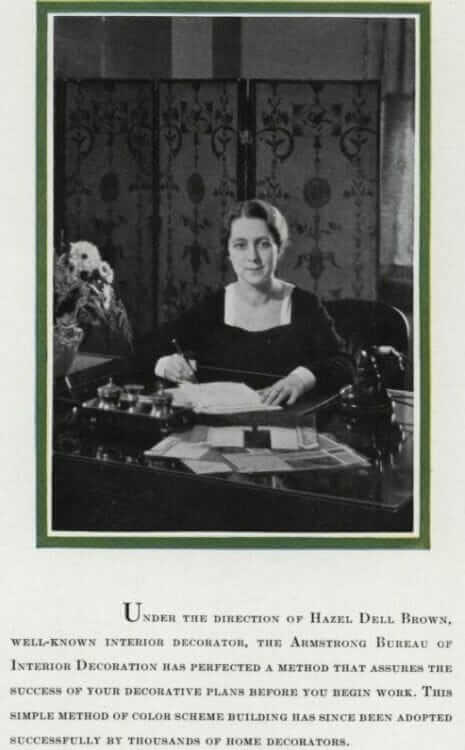 Was Hazel Dell Brown of Armstrong Flooring the most influential residential interior designer of the 20th Century — that you probably never heard of? I believe that, yes, she was! Last week, I wrote about Armstrong Flooring’s revival of its famous pattern 5352, and then, a history of pattern 5352. To follow up, here’s a profile of Hazel Dell Brown, the company’s influential and impressive in-house interior decorator — a story that should not be lost to history. END_OF_DOCUMENT_TOKEN_TO_BE_REPLACED 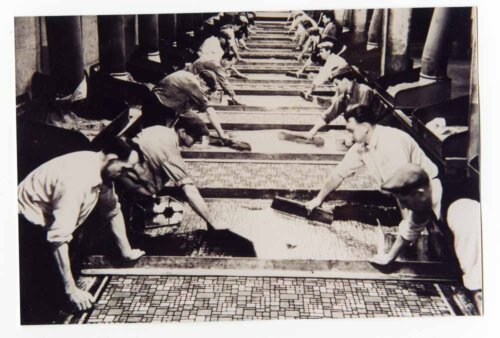 “The Christmas pattern” … “the mysterious Mr. McClurg” … 42 million yards sold in the first 40 years …  These are hints at just a few of the things I learned about Armstrong Flooring’s famous 5352 pattern when I talked about its history with company designer Mark Zeamer. Mark played a key role in the company’s 2020 revival of this storied pattern. He has worked for the company for 44 years, and he did historical research to prepare the revival, so he also was the perfect person to ask: Was Armstrong Flooring pattern #5352 the best-selling resilient flooring of the 20th Century? His answer: A resounding: Yes! Above: An early photo — possibly from the 1930s — of a production line making #5352 linoleum, photo courtesy Armstrong Flooring. END_OF_DOCUMENT_TOKEN_TO_BE_REPLACED 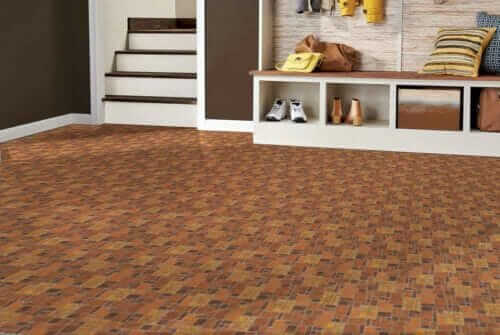 Armstrong Flooring pattern 5352 — the most popular resilient floor pattern of the 20th Century — is now coming back as a player in the 21st Century! Yes, in what’s sure to be the biggest product news of the year here, Armstrong Flooring is reintroducing its famous #5352 pattern – now dubbed “Heritage Brick” – in four colorways. Armstrong Flooring is in the process of rolling out the revived design through flooring retailers and expects it to be more widely available as the year progresses. I spoke with the designer, Mark Zeamer, in charge of the project last week. Above: One of the new colorways, Coral. END_OF_DOCUMENT_TOKEN_TO_BE_REPLACED