Are you interested in using an authentic vintage laminate design for your bathroom or kitchen countertop? Over the years I’ve been blogging, so called “document” patterns have come, and gone. Here’s an update / sweep of current offerings. I count at least 8 designs of reproduction laminate designs available today, with several available in multiple colorways.

The cracked ice laminate pattern was among the earliest offered when laminate was first invented for countertop use. I tend to believe: The first cracked ice pattern was from Formica and called “Pearl.” This is an “abstract” design that was super popular in kitchens and on dinettes. If you are interested in historical authenticity, I’d say, this laminate design is a good one for kitchens from about 1938 to 1953. This laminate continues to be digitally printed and manufactured, made to order, by Wilsonart. It comes in four colors: Red, Yellow, Gray, and Green.

Where to get samples of cracked ice countertop laminate still made today:

According to Formica historians, designer Brooks Stevens created Formica’s famous Boomerang pattern, originally named “Skylark”. The Brooks Stevens Facebook pages says the pattern was designed in 1950 and shows four colorways (dig the carnival mix on light gray field!). In 1953, the company hired Raymond Loewy Associates to recolor the palette. Today, the only color sold by Formica in the U.S. is charcoal. Hey, you can get even it on Amazon, and I’ll earn a wee spiff. Alternatively, it’s also available via Home Depot and other retailers like Heffron’s.

In one of the biggest developments ever in the history of this blog, entrepreneur Susan Halla of Make It Midcentury has reintroduced glitter laminate — and it’s available in 27 colors or more. Glitter laminate was possibly the single most popular laminate design ever, I tend to believe. It is so versatile!

Where to get glitter laminate plus more stories:

I adore Wilsonart’s 1970s-era Daisy pattern, which the company says was originally inspired by the flowers on a crochet dress pattern. But of course it was! It was the 70s! We’ve had quite a few readers use the super fun 1960s-era Wilsonart Daisy pattern in their kitchens and bathrooms.

Compre is from Wilsonart’s 1960s files.

Where to get samples of cracked ice countertop laminate still made today:

Formica in 2011 told me that White Onyx was introduced in 1969 and was still in its lineup. I checked — and it’s still there. That makes this laminate design — which I tend to believe was super popular back in the day — 50 years old this year! 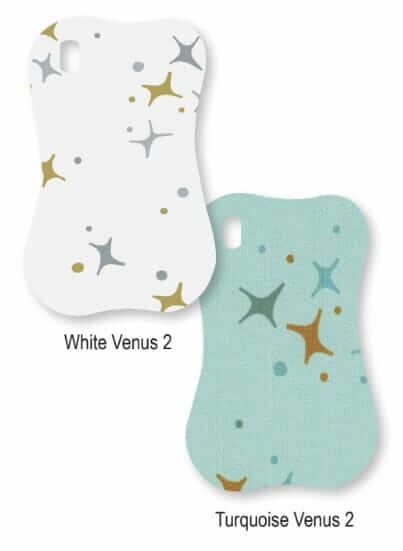 Thanks to reader Kyrsten — who found a great sample chain of vintage Nevamar countertop laminates — which she then sent to me — and which Nevamar’s new designer, when doing research, took notice of — we now have: Reintroduced Nevamar Venus laminates — for kitchen and bathroom countertops or other projects that could use this classic material — in two colorways! Yes, the team at Nevamar contacted me a while back… I sent them the sample chips… and today they are reintroducing an accurate reproduction of Venus — in turquoise and white — along with 18 other retro and mid century inspired patterns.  For example, below is “Kinetic” — another pattern that I like very much. I am not sure if it’s a reproduction of an original — I need to check with Nevamar. In any case, a beauty!

Formica’s maple butcher block laminate has been in production since 1972 — that makes it 50 years old in 2022! I used butcher block for a workshop storage project. If I had a 1970s kitchen, I would for sure consider it – although Bittersweet Orange would also be hard to resist!

Want more information on where to buy laminate today?: