Back in the day, many manufacturers made and sold versions of glitter laminate. Materials historian Grace Jeffers says that the design was pioneered by Formica — they launched the industry’s first glitter-embedded laminate, “White Sequin,” in 1957. Other laminate companies jumped on the bandwagon and soon enough, versatile and pleasing real-glitter sparkles were covering millions (surely) of countertops across America. Today — a look at a boatload of samples of glitter laminate from personal collection and from our Retro Renovation archives, which together comprise our new “catalog” of the various names for this design… and which includes glitter on plain white and colored papers and later, glitter inclusions applied onto more complex paper designs for even more atomic effects. So far we have found 42 examples from companies including Formica, Wilsonart, Textolite and Nevamar.

The names for basic glitter laminate on white: 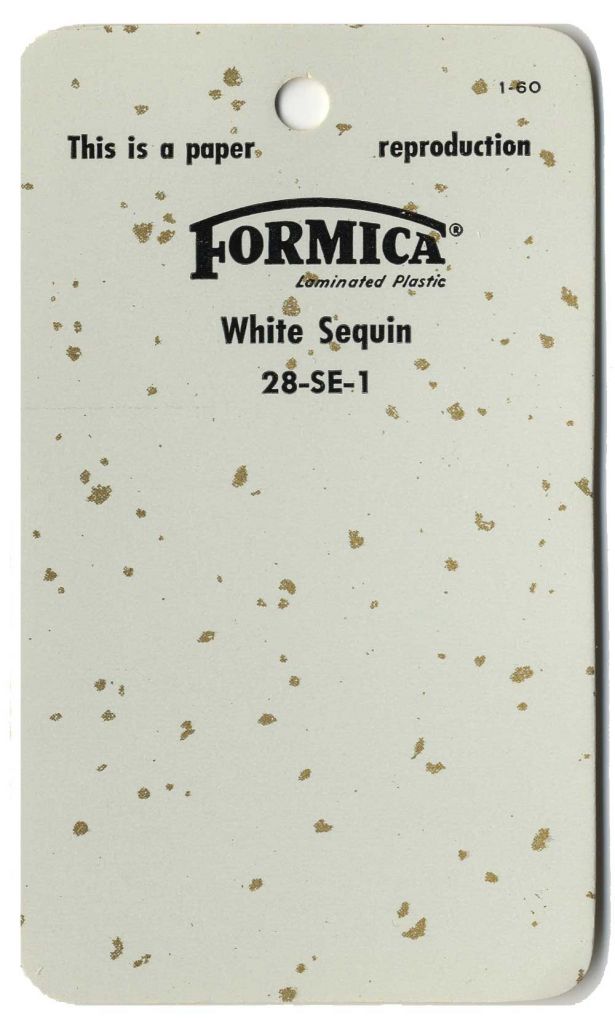 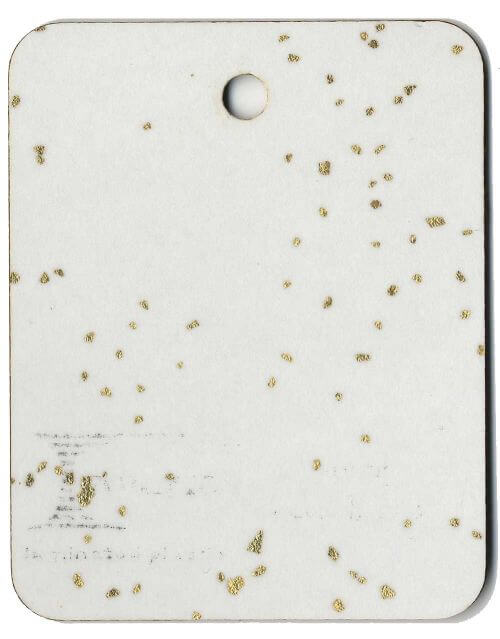 Formica called it White Sequin — The first sample shown above is a paper reproduction; the ‘glitter’ is ink — not the real deal, a cheaper way to show samples, I presume. I included it to show the graphics and the name — we can guess it’s from 1960 because of the “1-60” printed on the sample. This was just three years after introduction. The second sample is the real melamine-topped Formica White Glitter as it would have been installed on a countertop — you can see the real glitter shining through. Oopsy, my melamine chip originally had printing on it — the logo and pattern name. I made the mistake of aggressively cleaning it with a vintage cleaner I bought on ebay — without testing first — and the cleaner took the inky text right off. You can see the shadowy remainder of a different, later-era (1990s, I believe) Formica logo. Drats. The chip seems otherwise fine, though… Hereforeto — no more cleaning of my vintage laminate hoard, except for soft dusting.

Thank you, Robert, of ElectraChime — he sent me a bunch of these Formica samples — including all the paper samples I show here — for the permanent Retro Renovation collection! I greatly appreciate it!

Above: Textolite called it “White Gold”. Textolite was a General Electric (GE) brand.

Missing from our archive: Wilsonart called it “White Glitter.” Grace Jeffers says that Wilsonart later named it “Lamé.” I am sure they must have had one (see below, when I show all their Glitter on colored papers.) 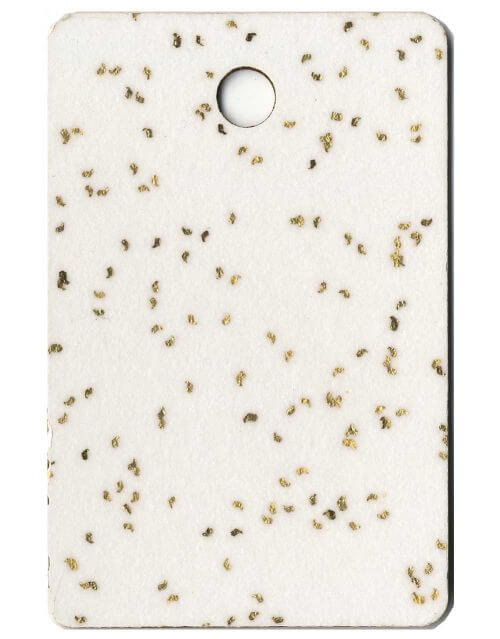 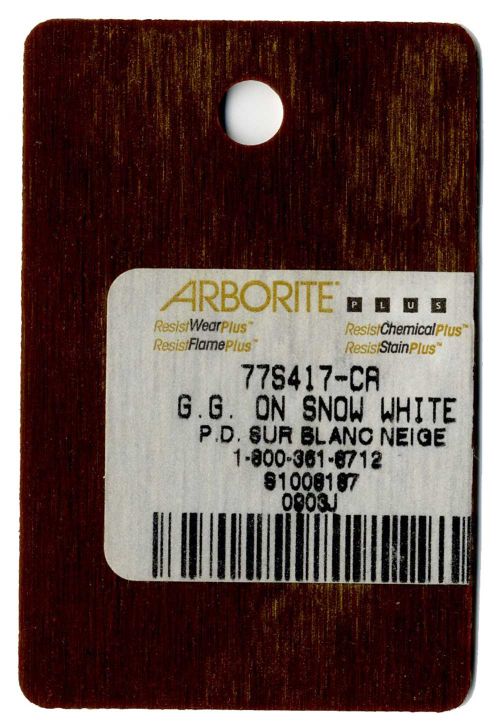 Above: Arborite called it G.G. on Snow White. . Grace Jeffers confirmed that G.G. stood for Golden Glitter. Arborite — a Canadian company now owned by  correction: Wilsonart — was the last company to offer glitter laminate — I believe they offered it into the early 2000s — that’s when I obtained this sample from a local store.

Companies that existed back in the day and which may have had glitter laminates:

Good news: Where to buy glitter laminate now being made again:

Now, let’s look at the different “simple glitter” collections and some of their color options. Again, this is not necessarily a complete list — these are just the samples I have in my personal collection and from a big story in 2012.

I have Formica Sequin paper samples in four colors: 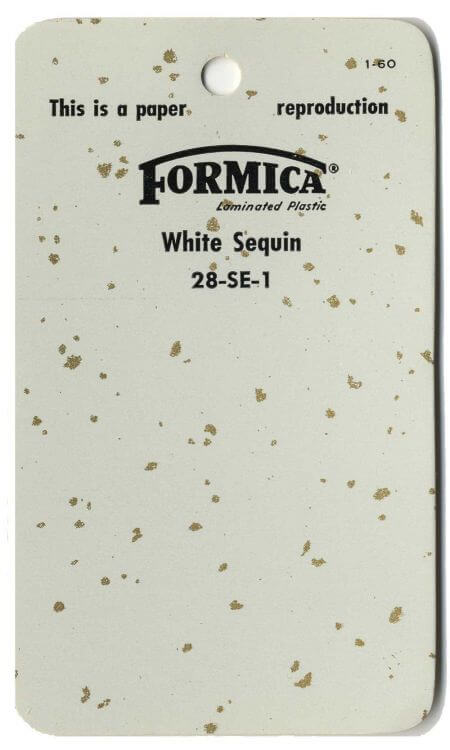 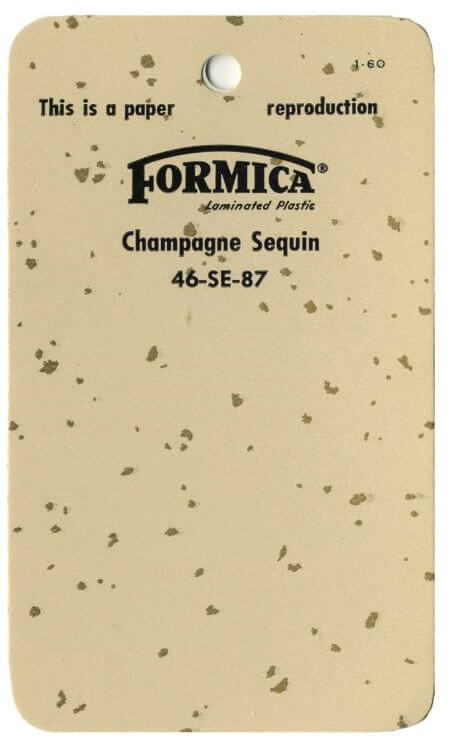 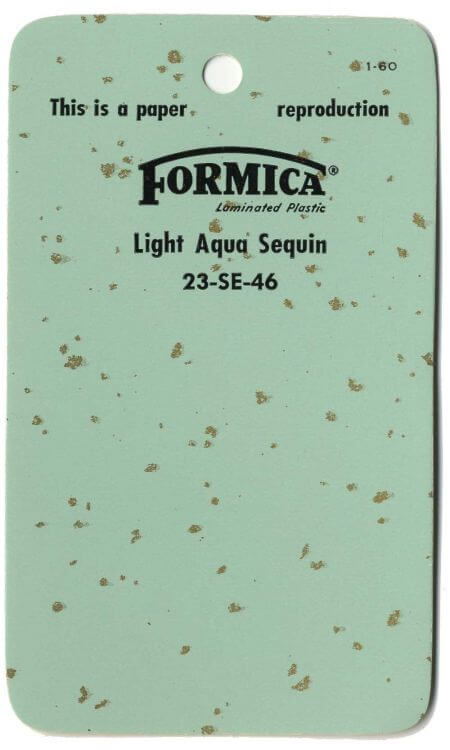 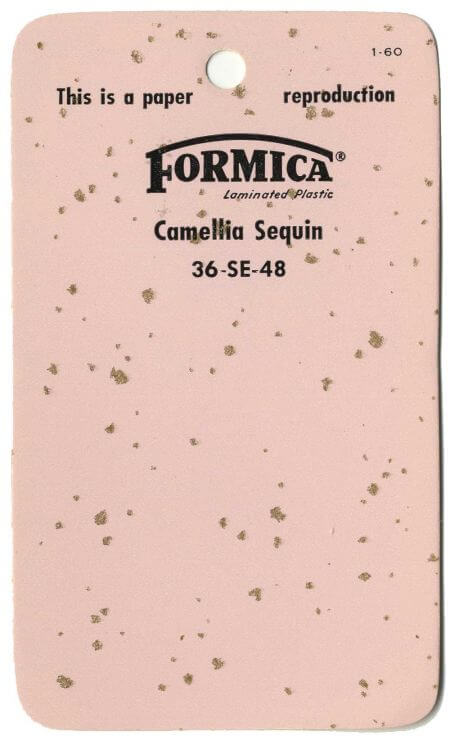 Not from my collection, but from this story we did in 2013 showing a supernova constellation of Wilsonart Glitter colors… They were being sold as key chains for $10 each, and as soon as I published the story, readers snapped ’em up: 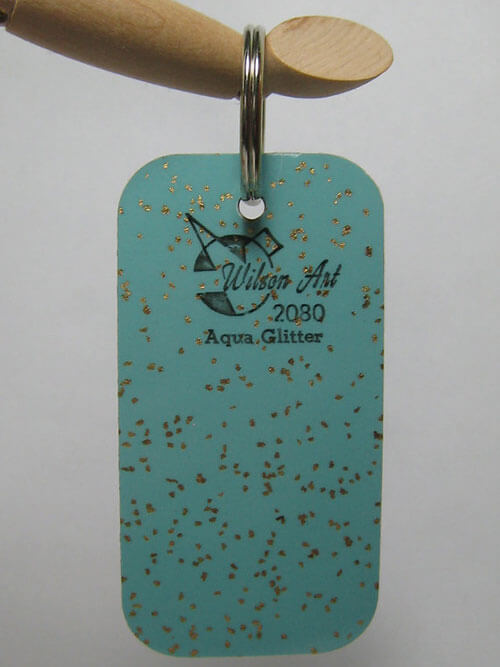 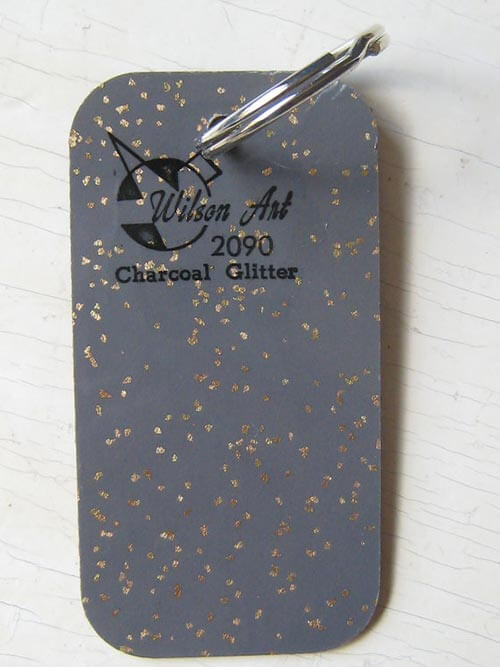 Textolite’s Gold came in… how many colors?

Oooh, in 1960 — again, just three years after Formica introduced its gold-flecked “Sequin”, it also had introduced a glitter design with denser, smaller, silver flecks — they called it Silversnow. Perhaps the inclusions are mica, rather than glitter? I have four paper sample chips: 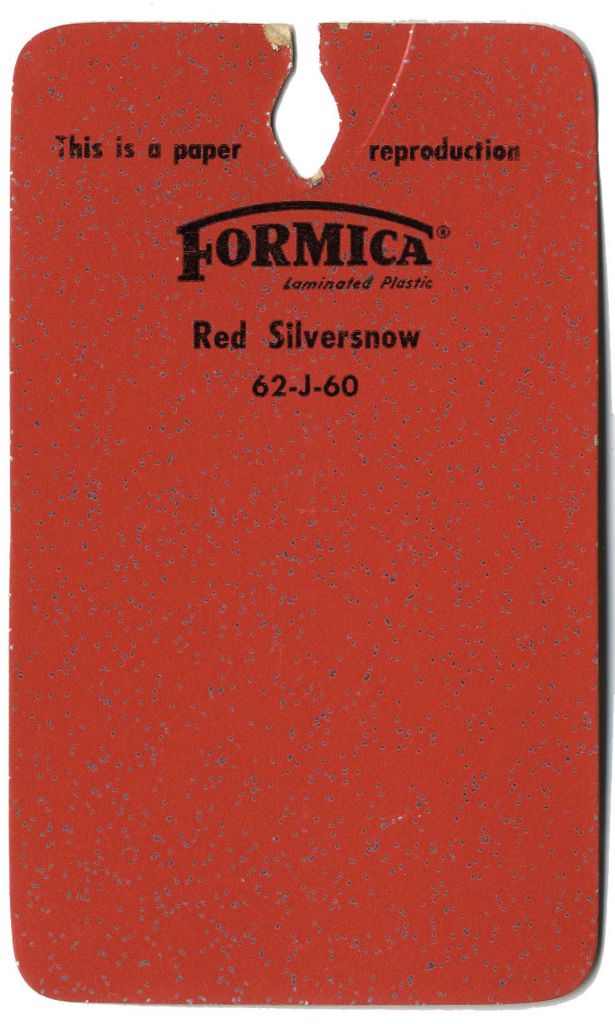 Formica’s Spindrift also was in my batch of samples that I date to 1960. It features two additional elements printed on the paper underneath — smudgy-veining + whisperthin cracking-veining. From my paper collection: 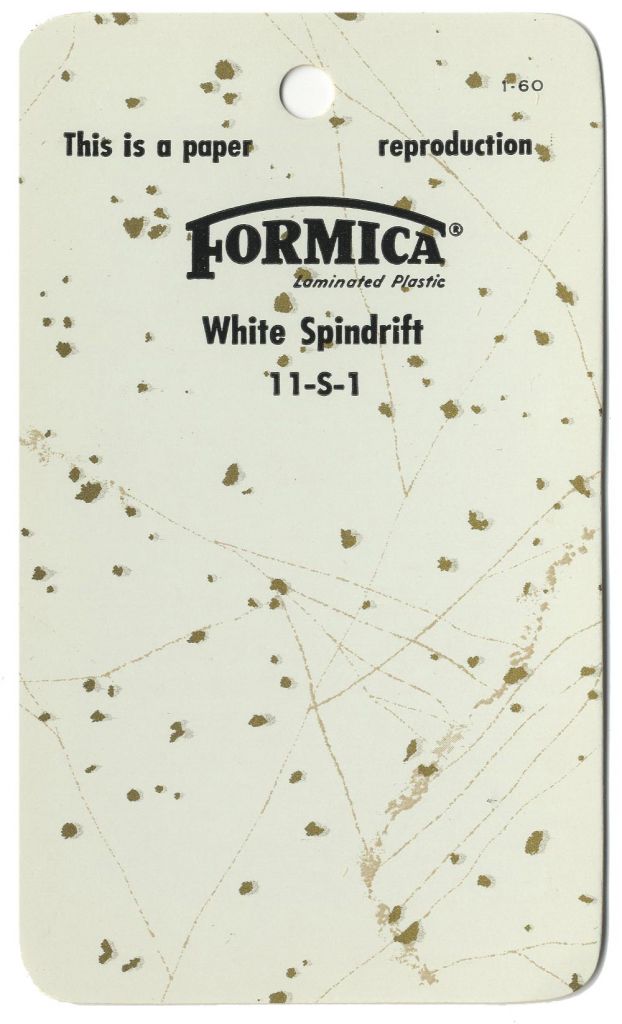 Wilsonart’s Satellite was glitter over paper with one additional element, subtle smudgy-veining: 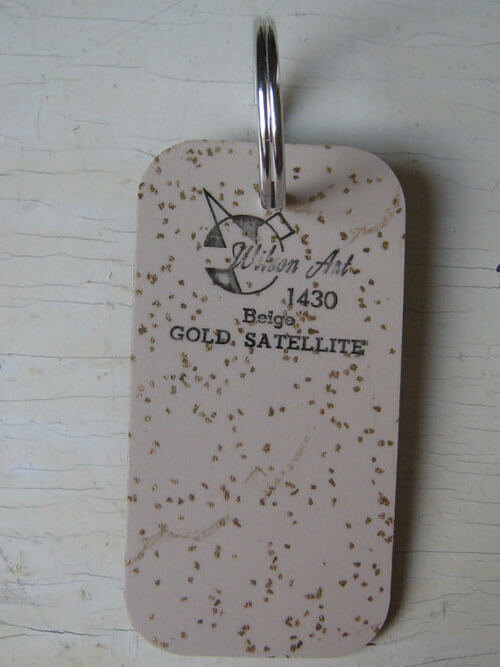 The smudgy-veining in my Textolite chips looks strong, more powerful than the Wilsonart’s shown above. I have it in two colorways: 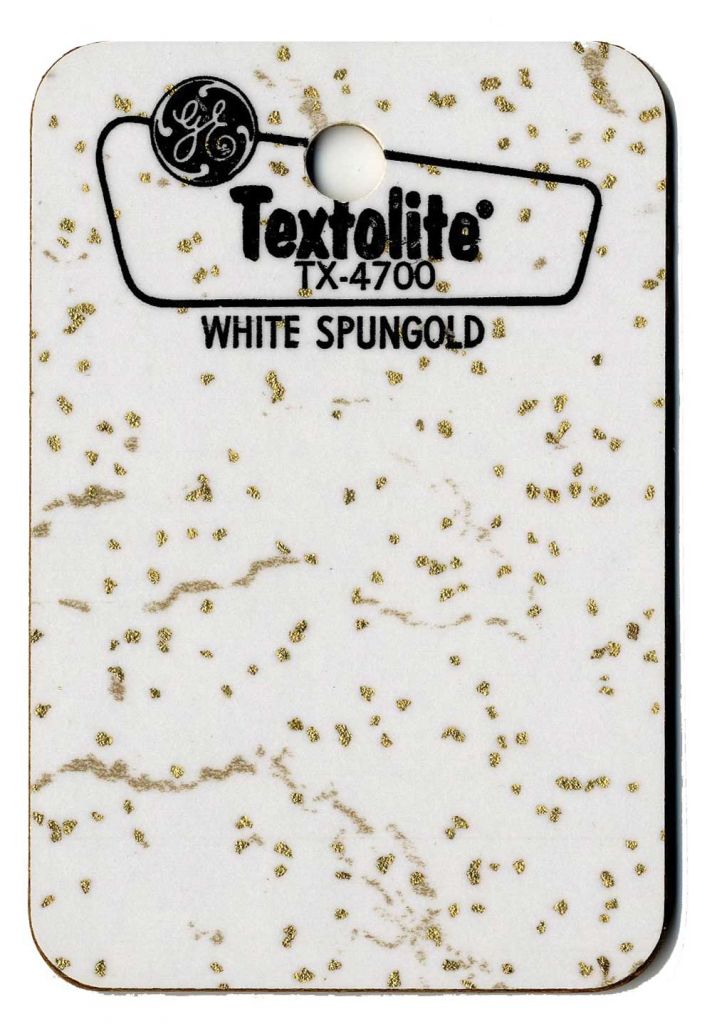 Glitter on simple starbursts, nom nom. These samples — which came along with all the melamine samples — were on paper. I speculate: Brand-spanking new, so tucked in, pronto, even before pressed samples were available. Only two colorways on my sample chain: 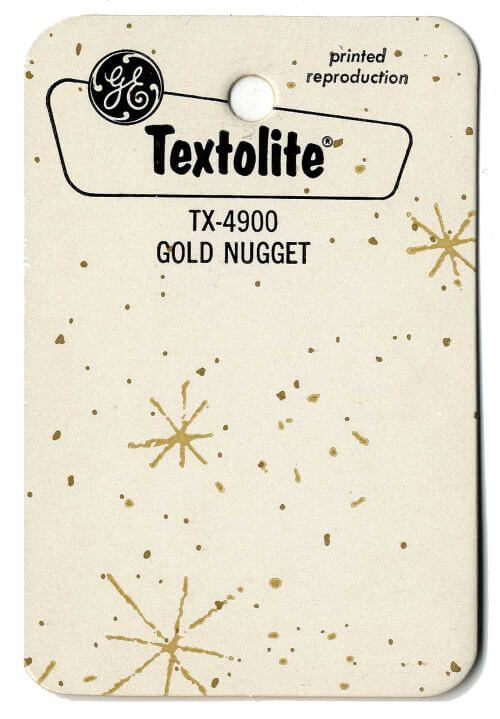 Twilight featured gold or silver glitter — the glitter was not real chunky — over paper that was pretty highly veined. However, I would say that the veining was not realistic, it was stylized… abstract, even. As if to say, “We’re only kinda sorta pretending to mimic marble — this is laminate, after all, and we’re not going to pretend otherwise.” 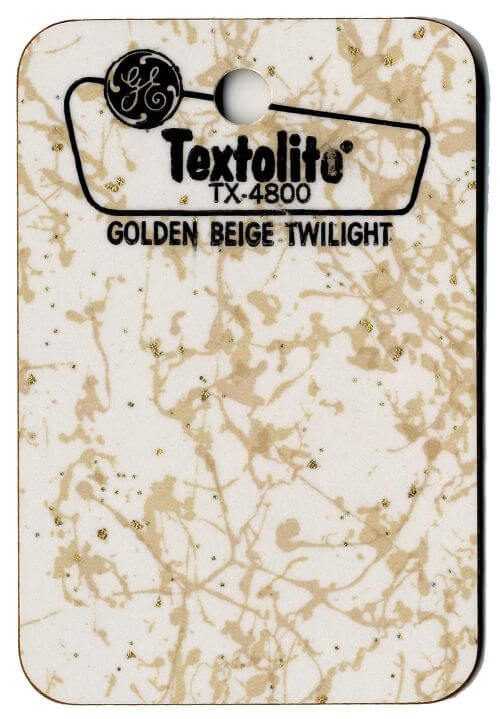 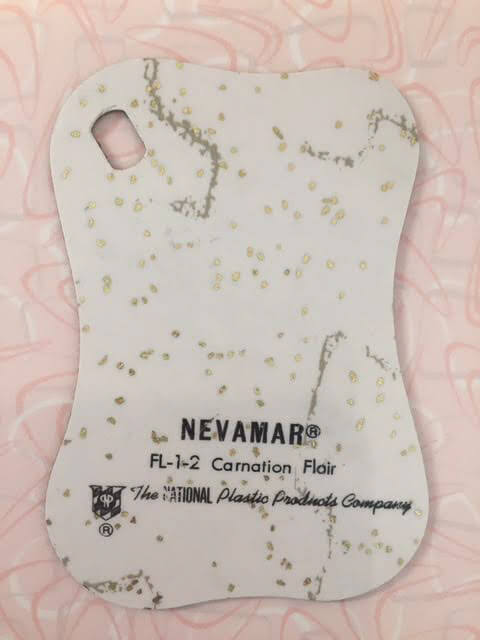 Above: A pink “Carnation Flair”. 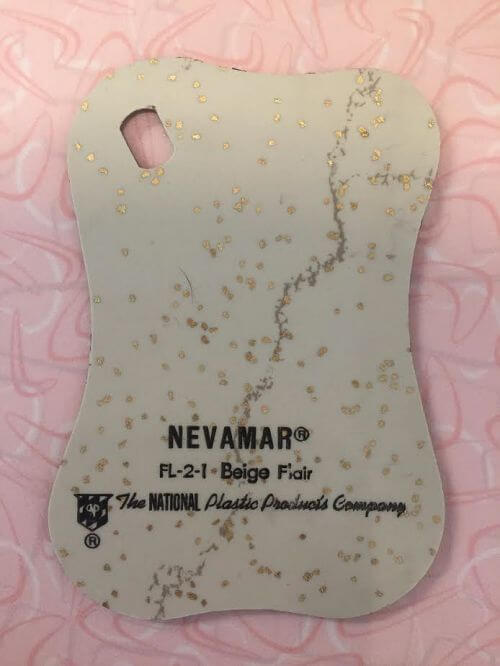 And above: A more neutral Beige Flair.

So there you go. Did your eyes pop out of your head? Did your greedy retro-loving hearts cry, “Gimme! Gimme!”?