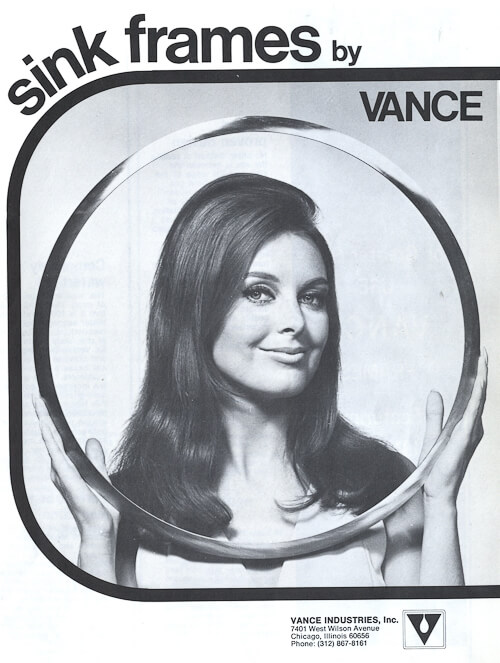 After reader Jon tipped me off the retro-fabulous products available at Vance Industries here and here and here, I was contacted by the CEO and co-owner of the company — Bill Rapp – who offered to provide some history about Hudee Rings and how they came about in the kitchen countertop industry . One of my favorite kinds of story:  Finding out — first-hand from someone who was there, right in the midst of the industry — how a unique product introduced in post-WWII America came about. Oh, and who doesn’t love a tale that throws in some sex for good measure? (We don’t get to that much here on this blog. Memorable: Naked nudie jigsaw.) Bill and I had an hour-long phone conversation – read on for this history of “sink rims” or “sink frames”, as Bill officially calls them. You’ll learn why they are called Hudee Rings!
[show_more more=”show more” less=”show less”] 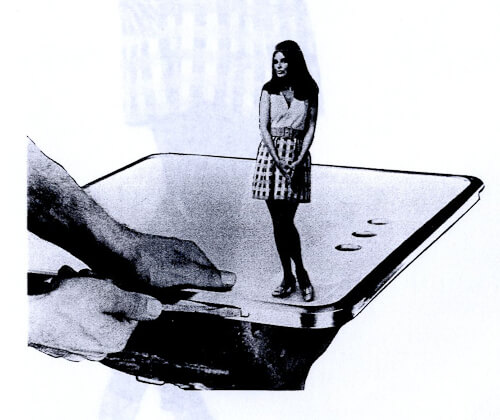 Here are quotes, only slightly edited, taken from my conversation with Bill Rapp, president and co-owner of Vance Industries… For this first story, I did not take out very much – I wanted to capture it all:

What you call a “hudee ring” was patented in 1948 by Walter A. Selck, of the Walter Selck Co. The name ‘hudee’, as I understand it, came from the combination of the names of the two engineers who worked on the product. One of them was named Hudek, I think, I am not sure of the other. “Hudee” was the working name of the product while they worked on it. 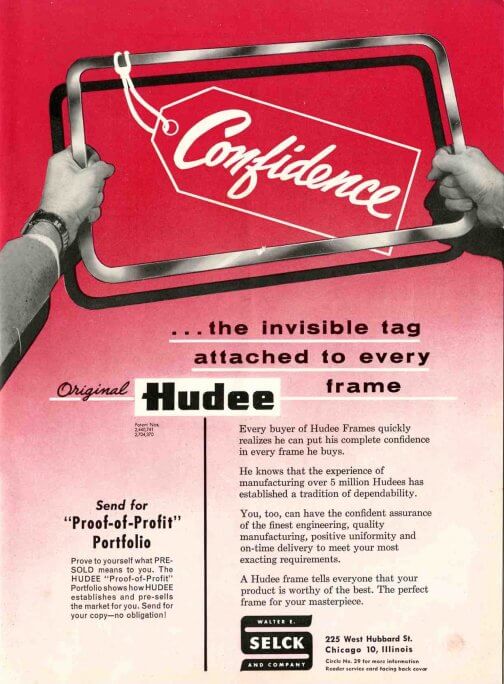 Once the product was introduced, Walter Selck realized immediately that what he had. Understand, that in postwar America, it was the coming of the Formica top. And the big problem for using sinks and mounting them in the new tops was that underneath that laminate was plywood, then particle board.  Plastic (laminate countertops) was impervious to water, but plywood was not. It would separate when exposed to water.

Going one step further back in time – before plastic countertops were introduced — countertops were made of linoleum-type materials, and used a steel edge band. And we had mostly drainboard sinks. But with the postwar advent of the dishwasher, and as a cost issue, male designers took out the drainboards.  [Bill explains he uses the word “male”, because those drainboards are still great, even if you have a dishwasher. As in: Only a man would have thought to do away with drainboard sinks/ I agree.]

[Bill further explains that at the same time, women wanted their sinks to be flush with the countertop, so that they could brush scraps right into the sink. Hence: the need for the metal sink rim.]

With great success of the sink-rim product Walter Selck could hardly keep up. So he opened up the competition and licensed his patent to other companies. 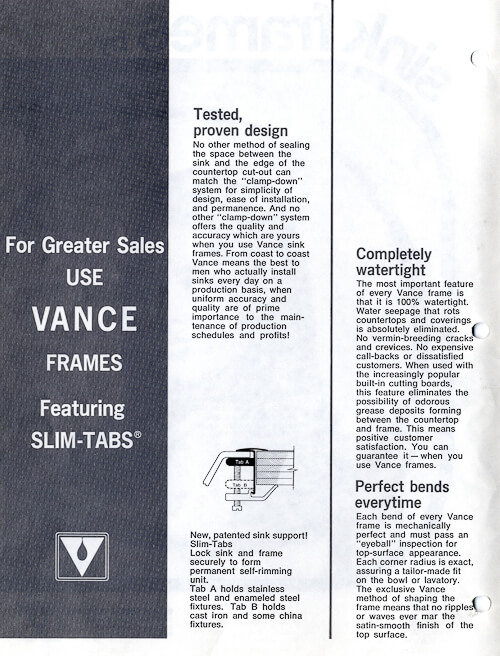 Vance Industries was founded in 1949 in Evanston, Illinois. and started manufacturing sink rims. Royalties were paid to Selck on everything that we produced and sold. 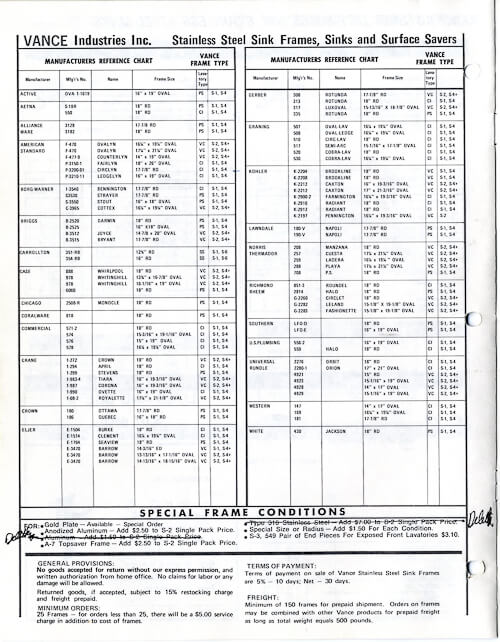 Even then, we knew there would be a sunset to the sink rim product, as self-rimming sinks started getting more popular in the 60s. To diversify, in 1970 we started producing our “Surface Saver”, which required a sink frame to install in the countertop. Also in the 60s, we began manufacturing stainless steel sinks. By the 1970s, using sinks that required metal sink rims became the least expensive way to install a sink. It became more limited for use in manufactured housing and mobile homes, concerned about saving a couple of nickels.

Today, we are the “Galactic Leader” in metal sink frames, although we don’t rely on this business for the majority of our sales anymore. While we show a limited number of sizes on our website, we can make a sink frame any size, although we can’t change the radius of the bend.  Our sink frame manufacturing is based in Niles, Ill. It’s 1940s technology – back when we made lots of these sparks flying from welding and grinding, it was great. 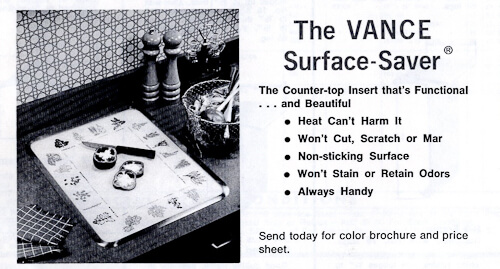 Our Surface Saver® built-in cutting boards are still an excellent solution to repairing laminate countertops damaged by hot pots and pans or from knife mars.  Rather than replacing the entire top, the damaged area can be cut out and a Surface Saver® installed. The Surface Saver® is an excellent sanitary food prep surface as well as a cutting board and trivet. The board is a tempered glass product, not porous.  These days we’re selling a few more: It’s not a dominant business for us, but certainly worth staying in it.  We were the first company to do a tempered glass food prep surface, and this ran very well for us for many years. We also had been selling metal rims for Corning’s Countersaver product. When Corning shut down their flat glass manufacturing in the 1980s, and started buying the glass from us it was a transformational moment for us. 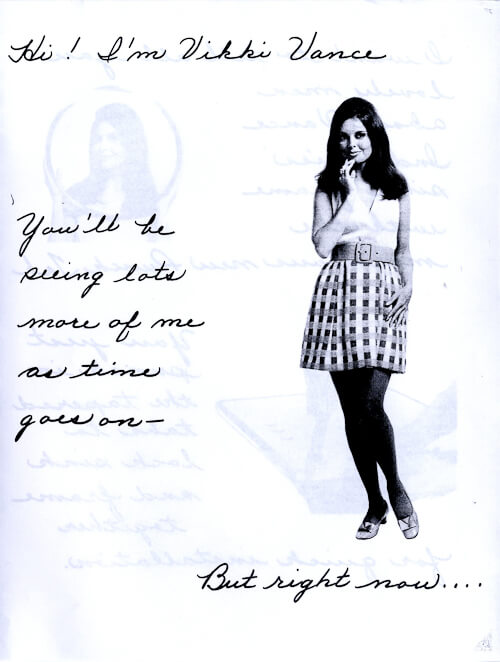 In the late 60s and early 70s and advertising being king, we launched a campaign, “You Should Meet Vicki Vance.” 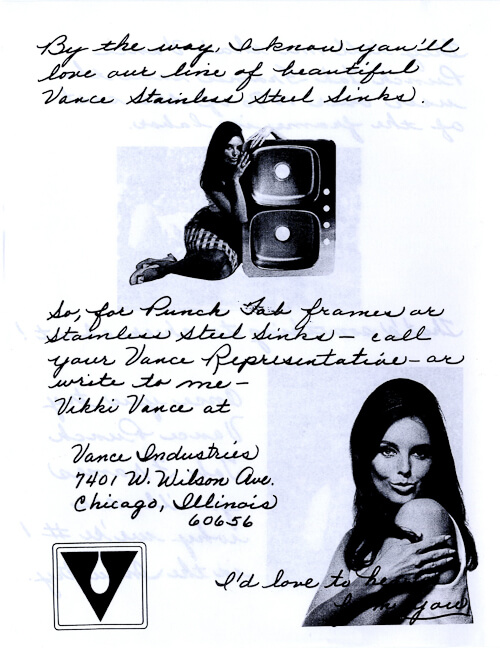 The people who bought and used our products where plumbers and plumbing wholesalers.  We used this promotion to set up a personal relationship between Vicki and the plumber. If they bought enough they would get photo of Vicki that was personalized. 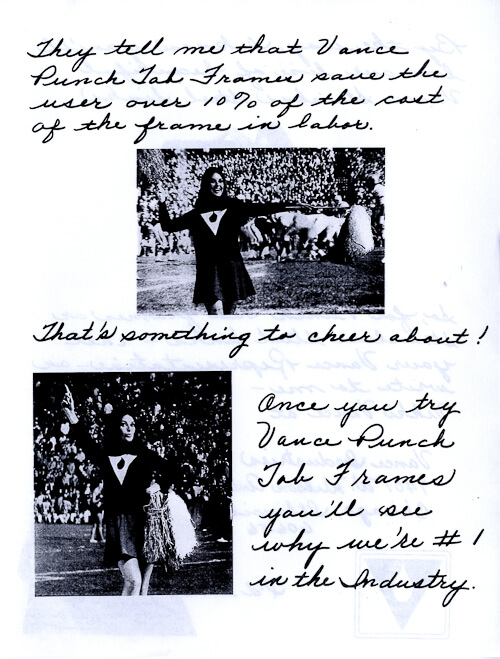 We bought 1,000 8×10 wood picture frames, the sales manager’s wife would sign the photos. It became THE promotion, really pushed Vance way up on the list of preferred supplier.

Today Vance focuses on sink mounting hardware both for top mounted sinks as well as undermounted models. And, we make sink frames, which are produced exclusively in the U.S. of U.S. stainless steel.

Note, that sink frame installation is still the best way to install a sink. There are a couple of reasons why: When you put the sink frame in, you can tighten it down very tight with no damage to the sink or countertops. Also, if a countertop is not exactly level, the stainless steel rim is flexible enough to still tighten it down watertight. Installation with a sink frame is pretty easy, compared to undermounting. And the frame is stainless, it outlasts.

Don’t use a screwdriver to pull it out. Get underneath and loosen the lug bolts. Then get in with a knife… it is possible to do it.

Where to get new installation clips if you are installing a vintage hudee-ringed sink and the clips are gone?

There were certain standards, and if somebody needs a pack – we will have a clip to install it.

And, Vance *only* has 18 sizes of sink rims aka Hudee rings on its website. What if readers want to order a one in a different size?

Yes, we can do it. We have one employee who spends full time making them… He’s 65…. Nobody retires here anymore. We’re all retro.

To steal a phrase from Kate McKinnon, I am so happy to live in a universe that includes hudee rings, Vicki Vance, sales managers’ wives who signed provocative promotional literature circa 1970 — and people like Bill Rapp who are happy to help us capture all this history. Thank you, Bill!

You can also get the rings directly on Amazon here. (affiliate link)

Here at Retro Renovation, we are the Galactic Leaders in chronicling hudee rings. Here are some related posts: