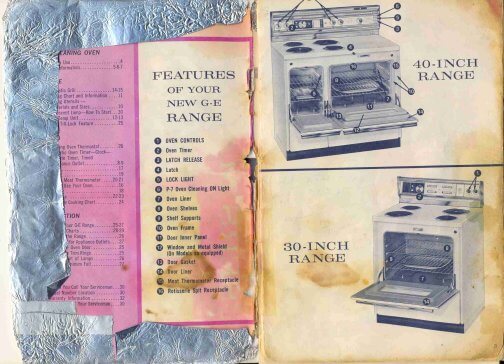 This is … the user manual for my 1967 GE 40″  range. I picked this object because the idea of “how people lived in your house” resonated with me and this certainly relates to that notion as I FOUND it in a manila envelope full of instruction materials left by the people I bought the house from. And, it is invaluable to me as I live in this house.

As you will see, it had been lovingly tended by the previous owners. By my estimation that would be the people I bought from as well as the original owners  of this house. The house was built in 1946 and my research into
the age of the  range — called GE and finally found a nice young man who knew to go into the  microfiche files. First he determined it was not from 1946 and then found it was  a 1967 product. Since the house passed to the second owners in 1986, this would seem to be the second stove purchased by the original owners and if so it has now lived twice as long as the first one did, as has its  User Manual. 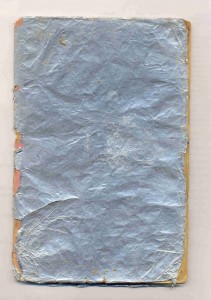 (This) picture … is the outside of this manual as I found it — covered in aluminum foil. The foil is what is holding it together and I have  never dared to remove it for fear I would not be able to get it, or new, back  on. So, I have yet to see the actual cover. Picture 2 (top photo) is the inside cover. On the left is the table of contents (hidden by foil) and the list of features for the ranges. Right side shows the 40″ inch,  which I have, and the smaller 30″ version.(Another) picture … shows the two pages devoted to the Sensi-Temp burner, located on the front left. Similar detailed instructions are included for every feature as well as many pages devoted to cleaning.

This booklet is 30 pages long and has so much information. Before buying this range and house, I had never used an electric stove. If this book had not been available I don’t know what I would have done — probably not the quality of cooking and baking I was used to, and which I can manage to produce  most of the time with this stove, although not all the time, I have to admit.

Anyway, I remember that your range is similar and if you did not get a good user manual when you bought it from the fellow in Troy, and would like me to copy this one, just let me know. BTW, the fellow in Troy seems to be gone. I tried to call to see if he would be someone who could keep mine going and could  not find him. And, the website given in the Berkshire Living article also is no  long a way to find him. Makes me very sad as I want to keep this one going  forever, if I can.