Home / What to Collect / meeting readers 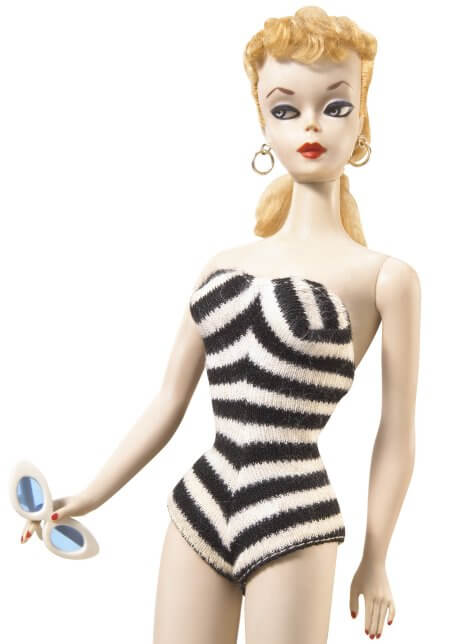 Today – Judi, aka Sumac Sue, shares her memories of growing up with Barbie. Thank you so much for contributing this, Judi — you are a beautiful writer and story-teller!

My younger sister, Joni, and I probably got our first Barbies in 1963, when she was in kindergarten and I was in second grade. These were the Barbies with hair in a ponytail with a fringe of bangs in front, sultry eye makeup, and pert red mouth. These features, along with a rather long, slender body, made the Barbie mildly similar to Audrey Hepburn….

…. Over time, we acquired Ken dolls with peach fuzz hair, a Midge with freckles and a strawberry blonde flip, and a Skipper with long blonde hair and funny flat feet. There were two more Barbies, one who came with several wigs, and one with hair that changed colors. Finally, we got tiny dolls called Liddle Kiddles, that we pretended were Barbie and Skipper’s little sisters. This was the extent of our Barbie Family. We stored them all in black Barbie suitcases that opened up into little dressing rooms, with storage and hanging compartments. 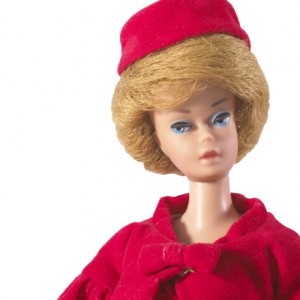 We had a few “real” Barbie outfits, but most of our Barbie clothes were made by our mom. A favorite Barbie memory is of Joni and me sitting on the floor wrapping scraps of fabric around our Barbies as Mom sat at the sewing machine, stitching up such ensembles as a nurse’s uniform complete with cape and cap and a satin wedding dress and gauzy veil. Nothing demonstrates a mother’s love quite like sewing teensy tiny buttons onto a sportcoat for Ken.

Barbies have gotten a lot of criticism over the years for supposedly being sexist toys that stifle girls’ development, presenting an image of women as pretty objects interested only in fashion and traditional female roles. I think that sort of view of Barbie is off base, because it doesn’t take into consideration that any toy, including Barbie, can be a launching point for a child’s creativity and imagination. When we played with Barbies, we each became rulers of our Barbie universe, and there was nothing stifling about it. 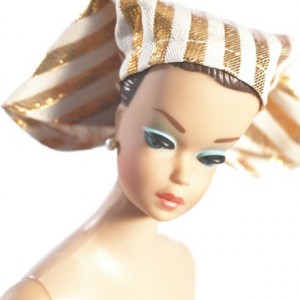 For instance, Joni and I received a Barbie newsletter, in which girls shared ideas on how to make things for Barbie from items found around the house. We were networking! By sharing ideas, we all became architects and interior designers — and recyclers, too — by making houses out of shoe boxes, and tables and chairs out of popsicle sticks and margarine tubs. We developed organizational skills, not to mention dexterity, by storing tiny accessories in old pill bottles and Band-aid boxes.

We kept this up until we hit junior high. Other activities took the place of Barbie, and our black cases stayed on the toy shelf. My sister never had children, so she still has her Barbie and Ken in their black case. I had a daughter, and I made the mistake a lot of moms make — I presented Kaitlin with her first Barbie when she was much too young to appreciate it. She promptly stuck it into a fountain at the park and used it as a tool for splashing her brother.

I waited a few years before letting her play with my old Barbies, but she never was as interested in Barbies as she was in her Beanie Babies and Pound Puppies. She received several Barbies from relatives for birthdays, an older cousin passed along her Barbies, and in time, my black Barbie case contained a tossed Barbie salad of tangled hair, detached arms and legs, wrinkled dresses, and tiny shoes scattered throughout like croutons. At some point I threw it all into a box of things headed for Goodwill. I regret doing that now because I’m sure there were a few outfits in there made by my mom. I wish I would have given them to Joni, to put into her Barbie archives.

So far, my favorite Barbie is actually one I gave as a gift to Joni a few years ago. It was a country girl Barbie, dressed in a straw hat and gingham dress, that I ordered off of a box of Little Debbie Snack Cakes. She loved it. Maybe someday I will have a granddaughter and I will get her a Barbie — but I will wait until she is seven or eight and is old enough to take care of it.