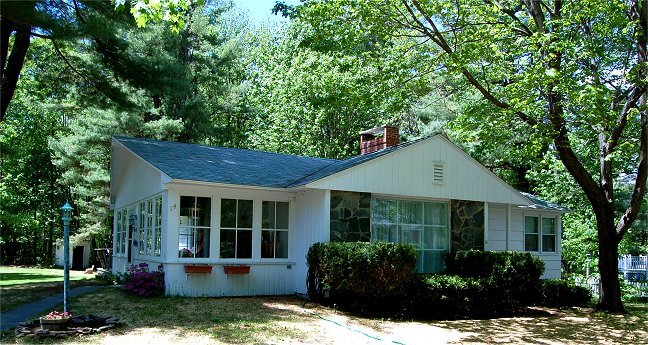 Reader Averyl is a new owner of a mid-century home. She recently wrote to share how she had researched — then met – the home’s original owners. I asked her to tell us more… Read on for Averyl’s wonderful story.

I’ve always dreamed of living in a mid-century ranch house like my grandmother’s where I spent many happy days as a young child, eating lunch at her chrome dinette set, admiring her figurines in her curio cabinet, watching “I Love Lucy” on her large TV with rabbit ears or looking out of her large multi-pane window onto the tree lined suburban street of Fort Lee, New Jersey in the late 1960’s.

Two months ago I bought my dream ranch house in Maine after years of looking. As soon as I walked inside the house I knew right away it would be my home. There had only been a few cosmetic updates and they were compatible with mid-century décor; no one tried to make the house look 2009. I looked outside the large multi-pane living room window and wondered about who had lived there before the seller from whom I would purchase the house. I knew she had been there fifteen years, but what about the original owners? There was an indescribably good energy to whole house. Almost like an episode of “The Twilight Zone” I felt transported back in time and I could almost see and hear “Leave it to Beaver” showing on a black and white television set as a mother cooked in the kitchen wearing an apron and her kids played in the front yard. I decided I wanted to look up the people who had lived there to see if I could tap into some of the history of the house and thank them for taking such good care of it.

After we moved in I called the town office where public records of ownership are maintained, and it turned out that the original owners lived in the house for over forty years! I really wanted to meet them, but I hesitated; what would they think? Would I sound like a nut? To some people a house is just that but to me it’s a home filled with history and stories. I figured, what did I have to lose other than a pretty daydream?

I looked them up and saw they were still living in my town. I introduced myself via email and invited them over to see their house (I didn’t call it “my” house). They were very receptive and offered to bring old photos- bonus!

When they arrived the following Saturday morning we walked around the grounds and they told us about the old neighborhood and people in it. Inside we walked from room to room, and I asked them what was original and what had been replaced. I heard many stories and they said my television is in the same spot where they had theirs and that they indeed watched the first runs of “Leave it to Beaver” and “I Love Lucy.” 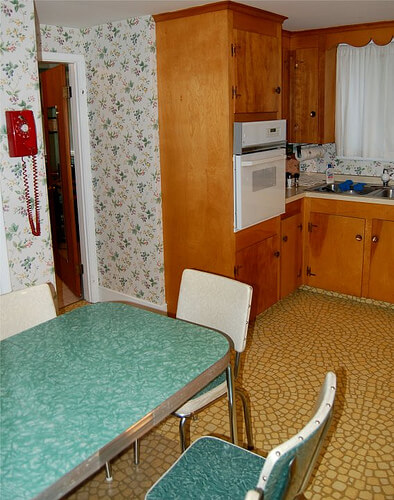 The best part of the visit was when we all sat down at my chrome dinette set in the kitchen with the large stack of photo albums they had brought over. I saw pictures of my house being built, family pictures taken inside the house throughout the years, bridge games played in my living room and my favorite, Christmastime.

Although only 1,200 square feet they raised two children in the house, and judging from the excellent condition inside, they were very well behaved. We talked about the changes in ways people are able to finance homes now as compared to then and how a bigger house has somehow come to equate “better.” A smaller house is now usually perceived only as a starting point.

I explained: “I plan to live in this house a very long time, yet people often refer to it as a ‘starter home.’”

“This was our starter home for forty-two years,” the former Lady of the House replied. 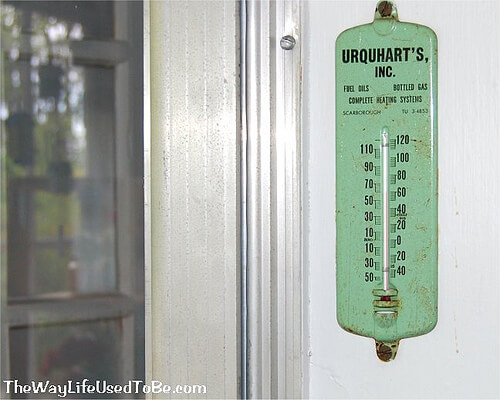 I learned about some of the local business history and even saw a picture of the businessman whose name is on the thermometer outside my door. It seemed that back then everything was locally owned and you could shake hands (or even go bowling) with the person whose name was on the shop.

After a lovely two hour visit they needed to get going and they were kind enough to let me scan some of the photos. I plan to have them over for my Christmas party so they can see the house with my 1950’s Christmas decorations.