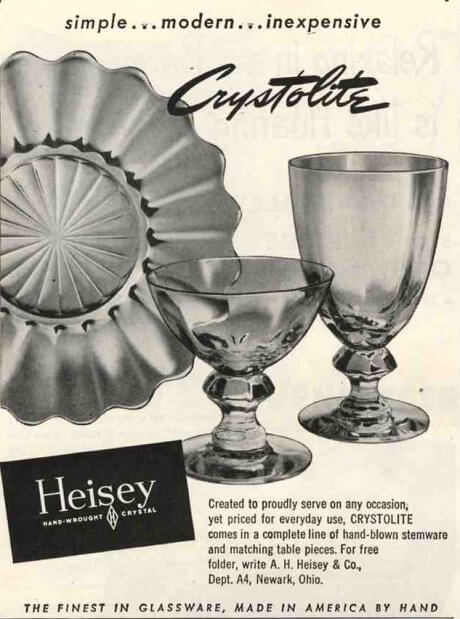 SOMETIMES WITH ALL THE FOCUS on mid-century modern, it’s easy to forget that traditional designs remained extremely popular in the postwar period. Young women still wanted nice crystal to start their married life. I recently came across this ad for Heisey Glass, a name I’d heard before. It’s from 1952, and this Crystolite line certainly is very pretty. I went hunting further for information on the history of Heisey Glass and found a tremendous collector’s resource.

It turns out that there is actually a National Heisey Glass Museum. It is based in Newark, Ohio, where the company operated until closing in 1957. The history of the company seems to be a prototypical first-generation-American-boy-makes-good story.  Augustus Heisey came to America with his parents in 1843, when he was a year old. His father died young, and before he was 20 his mother returned to Germany. He served in the Civil War and after that, became a salesman for a glass company in Ohio. He married the owner’s daughter and over the years, the company transformed to become Heisey Glass. The glassware earned a reputation for being very well made. It was sold all over the world, and was highly sought after. Initial Heisey designs were pressed crystal, but they were so well done that it was difficult to tell their pressed glass from the cut glass. Later they also developed blown stemware – and innovated with this process by adding fancier pressed stems. Augustus also was a pioneer in promoting his glassware with magazine advertising.

Interestingly and in follow up to our story yesterday about the popular of Early American decor, the company revived colonial patterns including flutes, scallops and panels in the 1890s. These were very popular and at least one colonial pattern stayed in continuous production until the company’s end. I’m thinking the Crystolite above shows these colonial influences. Doesn’t it look so comfy to the hand? You just want to start pouring a glass of wine right now.

During WWII, the company shuttered their plant like so many others, during a period of materials scarcity. They came back online after the war, and as this 1952 ad suggests, continued to pursue and build upon their reputation for excellent quality. But, it was hard to compete with mass production, and the company closed down after Christmas 1957.

I suspect that lots of postwar Heisey Glass will continue to come to light via estate sales these days. If you see it – now you will know what it’s about.

Here’s the Heisey Glass Museum history page. This group has created a really delightful website. Kudos to them.