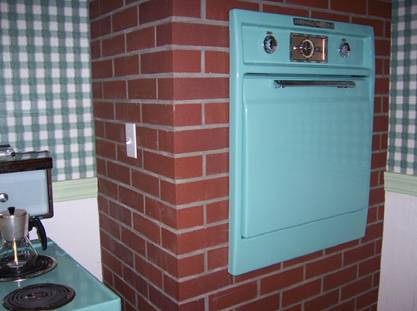 George sent in these photos of his retro renovation kitchen — he very ingeniously “built in” his wall oven by creating a brick veneer surround. I’ve definitely seen precedents for this idea, and am so pleased to see a reader do it. George shares his experience, and a bit of the step-by-step his contractor and mason used to get the job done. And we get to see more of the adjacent vintage GE stove — a dumpster-dive! –> 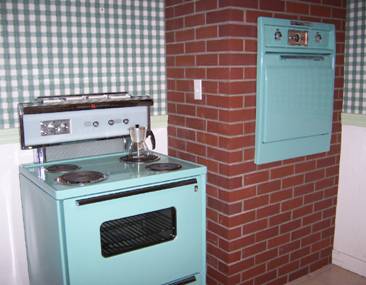 First, George tells us about the range — it went in first:

…I had been reading “Atomic Home” by Whitney Matheson, and slowly designing my home in mid-century motif, after the pictures in this book…. The stove was a rescue from the San Francisco Mission District – the owner had the stove in the trash bin. When I came upon it… I thought, gosh, somebody is going to throw this thing away and it looked like it still had some life left in it…  Oh, yes, my research indicates that the stove is from 1959 in terms of model year….Love to gaze at the stove and play “Affair in Aruba” by Les Baxter to get the true feel of the mid-century…I swear by the stove, and it cooks wonderfully.

George does note that he had to do some work to replace inconsistently-heating burners….”Well, it took me about 2 years,” he admits. 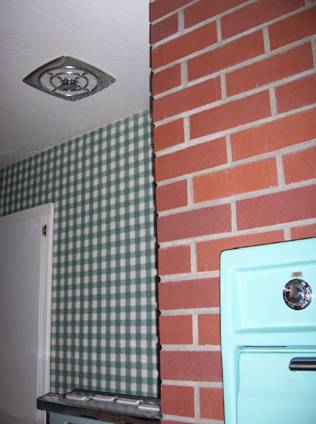 Here’s the story on the wall oven and the brick veneer surround. George writes:

For the wall oven, I was lucky enough to find a couple who had purchased an Eichler knock-off in Palo Alto, CA, and were planning to rip-out the high-grade Formica countertops and remove the existing, GE turquoise appliances (original to the house). They were going to re-do the entire house and turn-around to sell it. Luckily they advertised the wall oven on Craigslist, one of my typical haunts for mid-century collecting.

It was here that I picked-up the GE wall oven to match the circa-1959 stove. The wall oven had been in very good condition, as the former owners of the house seldom used it (according to the buyers of the house, and people from whom I purchased the wall oven). The former owners of the home didn’t have any young children that might have rough-housed the oven. It was, however, quite dirty. So I purchased for approx. $100.00 and cleaned it up with some Easy-Off (slowly becoming my best friend), and some latex gloves.

After reading through some 1950-1960 mid-century magazines, I decided to add a brick enclosure for the wall oven to my already pretty-mid-century kitchen. I had a carpenter come in and add the build-out for not too much money ($400). A mason added the brick façade (thin-brick, available at a local stone factory) – this was a bit more ($1,000 altogether labor and materials). Walla, I think it made a nice addition to the beautiful stove.

Oops, almost forgot. I purchased the ceiling exhaust fan off E-Bay about four years ago (see top of photo) – this was $150; it was new-in-box. Simultaneously with installation of the wall oven and brick, I had an HVAC installer install the fan over the renovated stove ($350). Works great; the ceiling fan was manufactured by a company called National out of Ocala, FL (no longer in business – I looked for it). The model is “Chef-Aire.” The fan is circa 1970s, is 9-inches in diameter, and has metal blades and a heavy, metal crank-shaft inside built to last a lifetime (as long as you oil it each six-months according to the instructions). Guess they didn’t have Teflon ball-bearings back in those days. I had a damper installed to prevent back-flow of cold-air into the house during the winter. I forgot that these fans are a bit louder then those available today, ahhh but nostalgia….My aunt’s home in Miami, FL (circa 1964) had one of these near the kitchen stove.

Anyhow, take care and hope all is going well.

Thank you so much for sharing, George. The whole thing is genius. Adding brick veneer to a kitchen is a great – and not too expensive — way to add visual interest. And, I know you have more going on in that house of yours, so look forward to doing another feature soon.