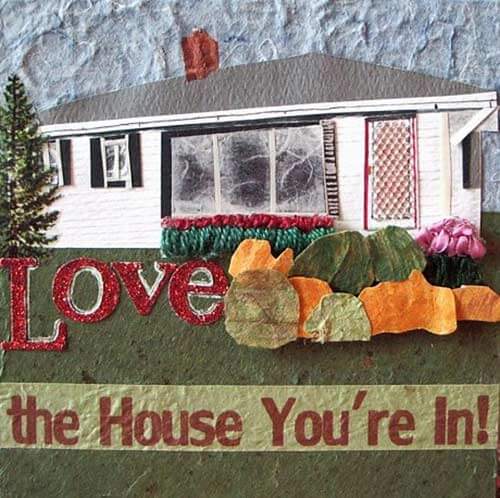 Today is RetroRenovation.com’s second birthday. And on this occasion I would like to introduce something I’ve been noodling for the better part of the year — an all-new term that I have invented: “Mid-Century Modest.” I first used the term at my home show talks in Eugene in March…and then again when I met with the wonderful Portland MCM League group for dinner right after.  I believe that author Cara Greenberg is credited with coining “mid-century modern,” in 1985, with her book of the same name. A mere 24 years later, let me introduce “Mid-Century Modest” and along with it, the Mid-Century Modest Manifesto.

I think that we all pretty much know what “mid-century modern” design is all about, at least in its popular incarnation. There is an entire philosophy behind it, but in short, it’s typified today by sleek and futuristic designs like Saarinen tulip chairs, $,6000 Eames lounges, and experimental-shaped, high-ceiling, loft-like contemporary homes. The irony is that while mid-century modern design came out a kind of communist “internationalist” ethic aiming to make housing more accessible to the masses, it can actually be out of reach. As you know, I like to call it “high falutin’ mid-century modern design” in recognition that authentic licensed designs are very expensive.

My new term, Mid-Century Modest, recognizes the fact that while there may have been 1 million mid-century modern homes built in postwar America, there were about 29 million Mid-Century Modest homes. And, while Americans may have had a progressive social and economic outlook, they tended toward the conservative in their homes. In all these years, nothing quite says “stable and affluent” in the U.S. of A. like a center entrance Colonial. That’s why we see so many Early American elements both inside and outside our postwar homes. Finally, while some pundits today consider the vernacular mass-market postwar design all too “kitsch” and pretty much spit on the idea of “tract” houses and all they stood/stand for, I say: Let’s celebrate Mid-Century Modest, too – because this era of American housing and all it encompassed were really quite fascinating and special.

So, that said, here is my first draft of my “Mid-Century Modest Manifesto”:

NO QUESTION, we love Mid-Century Modern homes,
the high falutin’ designer kind.
BUT IN POSTWAR AMERICA, while we built
maybe 1 million mid-century moderns –
we built some 29 million Mid-Century Modest homes.

MID-CENTURY MODEST:
Mainstream. Main Street. Mass produced. Middle Class homes.
ROYAL BARRY WILLS Cape Cods at one end of the architectural spectrum.
CLIFF MAY Ranches on the other.
AND OVER THE NEXT 30 YEARS –
a gazillion prosaic, vernacular melting-pot variations in between.

MID-CENTURY MODEST HOMES ARE: Small –
1,000 square feet — or less! — for many years running.
“SMALL” TODAY– but to their owners starting in 1946,
they were the culmination of the American Dream.
Following years of economic Depression and WWII,
these little homes were an amazing gift.

HOW DO WE LOVE THEE, Mid-Century Modest homes?
Let us count the ways…

THERE IS MUCH TO APPRECIATE in our Mid-Century Modest homes.
And certainly nothing to apologize for.
GRANITE countertops? Who needs ‘em, especially when they come with
a home equity loan that stresses our family finances beyond our limits.
What silliness. What Insanity.
SHHHH! Don’t tell anyone, but our Mid-Century Modest homes,
because they are so unpretentious by today’s standards,
can be much more affordable to buy and to renovate.

RETRO RENOVATION is very much about the “Re”:
Reduce. Re-Use. Recycle. Restore. Re-Store.
Returning to the source of “The American Dream”…
And in the process, re-thinking what we want it to mean for us today.

OH YEAH, and Retro style has a happiness-quotient that is off the charts.
WE LOVE our Mid-Century Modest homes
in all their glorious simplicity and optimism,
and cherish the opportunity to safeguard their history and heritage.
That’s the: Mid-Century Modest Manifesto.