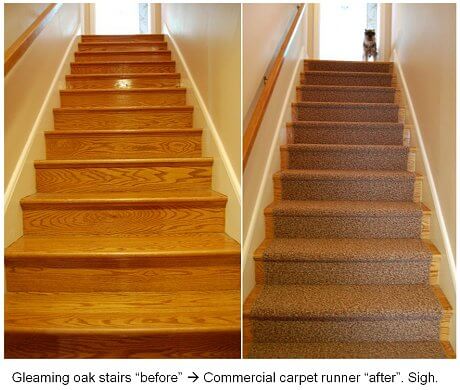 Just so’s you know, there are those days where I sacrifice aesthetics for: functionality. Six or seven years ago we pulled the aged blue plush carpet off the stairs to the basement and had the stairs refinished. Oh, the gleaming oak treads were sooooo pretty. We use the basement every day — our TV and two offices are down there, so this is heavily used staircase. Ummm, I only just about killed myself slipping on the oak three or four times a year, but it was my calculated risk in the name of beauty. Then enter: Astro the retro wonder dog. Little mister only had to slip-slide down the the stairs twice before we realized this situation would no longer work. We started carrying Astro up and down the stairs, and I went looking for carpet. 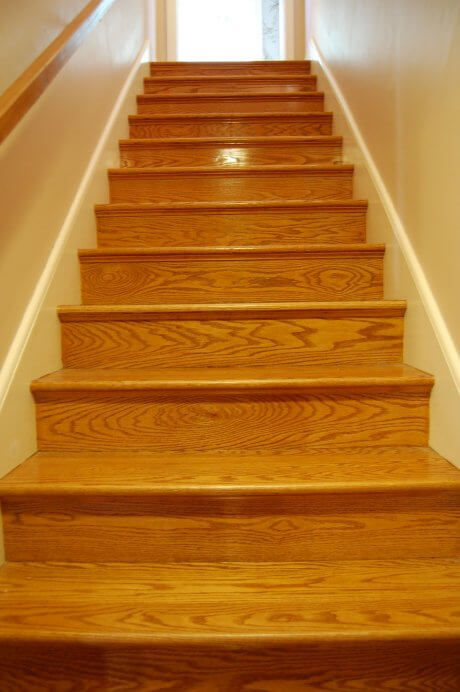 The next Saturday I went to the local carpet store. I wanted something: durable, inexpensive, and neutral-ish in a way that would connect the original cork flooring in the foyer upstairs and the gold plush carpet in the basement. Oh, and I didn’t want it to show the dirt. I wandered around until I found myself in the commercial carpet section. There were a gazillion books and boards, so I asked the nice sales woman for help. I gave her my “want” list. She handed me a little binder with about 16 designs – I thought one of the colorways looked like it would work. I took the binder home. A different colorway — now installed as shown — turned out to be better. Dave the carpet guy came to measure, gave me the price, and I ordered. 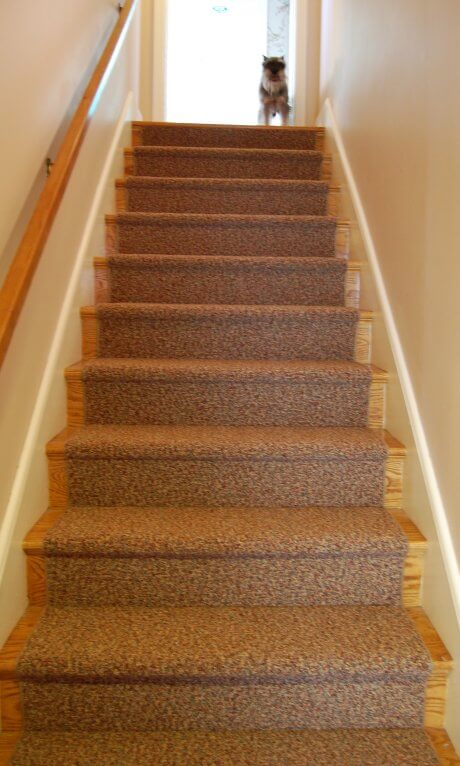 Honestly, I have not made a design decision this fast EVER. I could have tortured myself and gone back to the store and looked at 46 million more samples. But, I didn’t have the time. And I guess I knew from all my experience, that this commercial berber-y looking whatever would be FINE.

The only thing I changed my mind on, was that I originally thought I would carpet all the way across the stairs, rather than have a runner. That’s because Astro likes to walk up and down the stairs hugging the wall. So, that’s what I originally ordered. But when I told my husband that night, he suggested a runner instead, because he thought it would be nice to see some of the wood. When I told him not too much wood could show because Astro would still slip on the side, he got all grouchy and started murmuring about how he hated carpet on stairs and never mind expletive deleted. In any case, he had planted a seed (my husband has very good design sensibilities) so I slept on the question. The next morning I called the carpet store, and there was still time to make the change. I was literally on the phone with Dave the carpet guy asking how wide we should make the runner. My stairs are 42″ wide… I just wanted a few inches of wood to show… I slapped down a yardstick, centered it, and it looked fine… so we made the runner 36″. What color did I want the binding, Dave asked. I said: Make it match, like, neutral, surprise me. Can you believe I said that???? It’s beige. It looks fine. The runner was installed yesterday. I had John, the carpet installer, wrapped it tight around the tread, the bull-nosey part that sticks out — but we kept the trim under the tread. If you pull that out, there likely is not stain underneath.

I can’t say I love the carpet runner. But, it looks FINE. And Astro, he’s scurrying up and down on his own again. I even feel safer.  Sometimes: You just gotta make your choices quickly — and get on with your life. 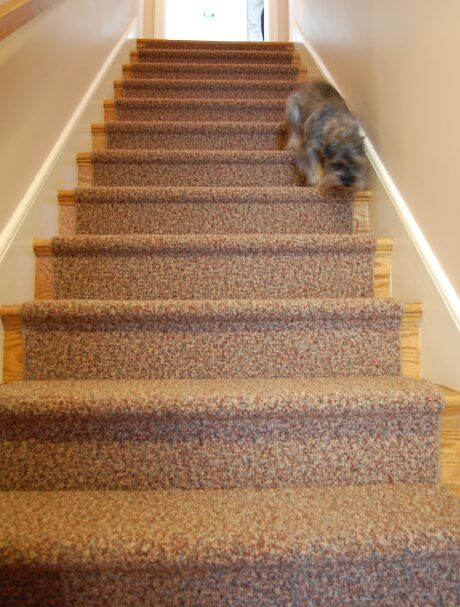