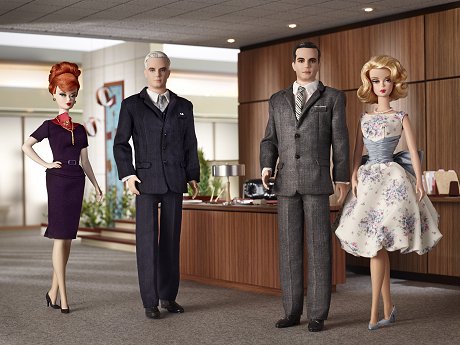 You know it had to happen — Mattel is launching a new line of Barbies replicating four of the stars of Mad Men: Betty and Don Draper, Joan Holloway & Roger Sterling. The dolls will go on sale for $74.95 in July. Watch for Season 3 of Mad Men on DVD on March 23. The company’s complete news release follows.
.


Disclosure: Retro Renovation is an Amazon affiliate, and receives a small commission anytime you click onto Amazon from any link on this site and buy anything (retro or not).

The “Mad Men” Barbie Collector doll collection embodies the “Mad Men” series’ couture fashions and accessories, and its iconic 1960s style and aesthetic. The series, which is produced by Lionsgate and airs on AMC, has made history with its multiple Emmy and Golden Globe Awards by chronicling the lives of the men and women of Madison Avenue advertising in the 1960s.  Season four of “Mad Men” premieres this summer.

Gracefully molded of Silkstone®, a material that resembles the look and weight of porcelain, each doll is stylized in iconic costumes from the series, and comes with accessories true to their show counterparts.  Don Draper wears his classic, polished red-lined suit and comes accessorized with a hat, overcoat and brief case; Betty Draper’s classic look is captured with unparalleled detail, from her faux pearl necklace to her pumps; Joan Holloway looks chic in a purple skirt suit and perfectly styled coif with her staple accessory – a pen necklace; and Roger Sterling is looking dapper in his monogrammed shirt.

Fans can get exclusive collectible sketch drawings of the “Mad Men” Barbie Collector dolls when the Season Three DVD hits stores on March 23, 2010 as each DVD set will include one of the four character sketches. The Mad Men: Season Three DVD contains all 13 episodes of the season and is also loaded with hours of special features including extensive commentaries and innovative featurettes that examine the historical events that shaped 1963.

The Barbie® Fashion Model Collection “Mad Men” Barbie® dolls will be available for a suggested retail price of $74.95. Available at BarbieCollector.com, amctv.com and select retailers.