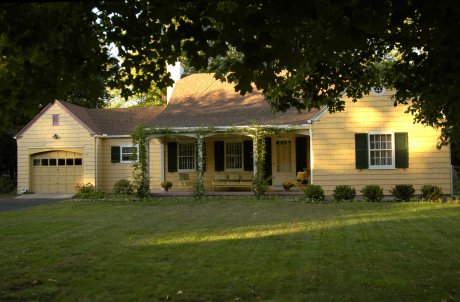 Lots of readers had fun suggesting curb appeal ideas for Sarah and Liz’s 1946 Victory Home in Winnipeg. Gavin had a great idea that lots of folks seem interested: Creating a frame to grow creeping vines like Honeysuckle or Dutchman’s Pipe on the outside front of the house. Here is his explanation of how to do this yourself… along with a gorgeous photo of his own home, where he has constructed this frame and the vines are on their way. Gavin says: 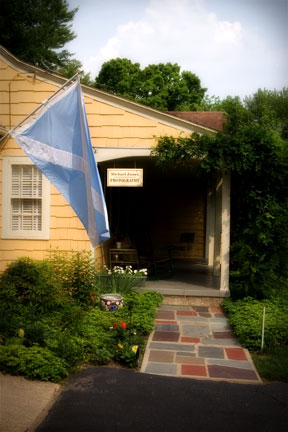 A frame can easily be made from pipe so that it stands two feet away from the house…Honeysuckle or Dutchmans Pipe would be pretty. Pick one and let them grow together. Add a few hollyhocks and Bleeding Heart and it’ll be “Grandma Time”. I would not recommend Wisteria anywhere near a slab foundation home: It will practically be sprouting through the concrete floor of your living room!

I used lengths of galvanized pipe from the home center. Not too $$$. I built it into inverted l_l shapes using screw-on elbows and t-joints in the center with pipe and flange (to attach it to the house). The open ends I sunk 4 feet in the ground and planted at the base. Set this at least 2 feet from the house for trimming, access, window washing and moisture control. It will look like nothing for a few weeks…not too hot the first year……and then- you are going to expect Jack and the Giant to come running down any moment! 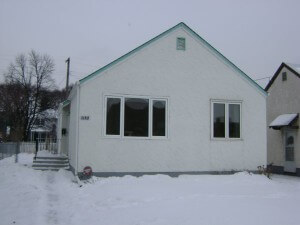 (Regarding Sarah & Liz’ house, Gaving suggested:) Two ideas for your consideration: Because it is stucco- I would love to see vines. One on the left corner and one between the front windows.….If you DO go with the vine idea…let it reach for the sky….or at least the roofline. You could also train it to wrap around toward your doorway as well. Google Image: Dutchmans Pipe.

In your snow-y climate, it can easily be kept in check and not swallow your home!

Best wishes to you both, Gavin

Thank you, Gavin. My brother-in-law used the same process you described to create a set of three trellises, also set on the side of the house, for roses. I recall there was some sort of welding involved, e.g. He Who Dies With The Most Toys Wins. My BIL also used copper pipe, which cost a bloody fortune, and that was even before copper prices soared further in the last few years. All that aging copper-gone-verdigris looks fantastic, of course. But, even just using galvanized — it’s clear how this is a great idea.

Question, Gavin: I made poles for my vintage birdhouses out of galvanized pipe and connected them into plumbing connector-gasket-thingies that I screwed into the bottom of the birdhouses. When I did this, I had to pay a little extra to the lumberyard where I got the runs of pipe (which they cut to my size specificatios) to thread the ends to screw into the connector-gasket-thingies. Is this required, also, in the project you describe? That is, how do the screw-on elbow screw on to the runs? And, will we need our own pipe-cutters to get the trellis pieces sized correctly?