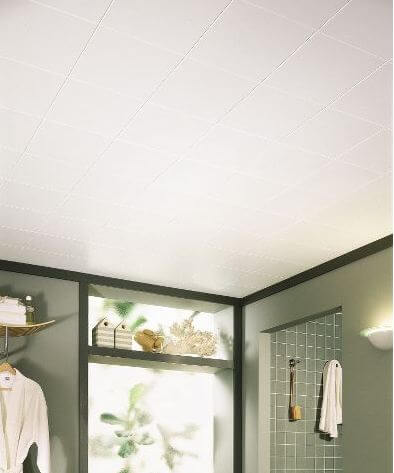 This might qualify as the most boring home renovation post ever in the history of the universe, but, hey, it actually has historical precedent — in my house. Yes: Plain white fiber ceiling tiles. That’s what was originally installed — and still is on the ceiling of our basement bedroom, which now serves as my husband’s office. 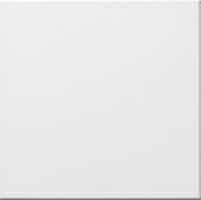 When we moved in, the same tiles were also in our basement TV room. There, we replaced them with a drywall ceiling when we removed spot lighting and updated the electric. Aesthetically, I prefered the smooth look of drywall in that space. But in the bedroom, we left the tiles as is, and they look just fine.

We did repaint both ceilings Sherwin William beige, which reads “white” but much softer. Our basement is comfy cozy homey, with cherry paneling and gold carpet. Brite white would be so wrong down there.

I am guessing that tile ceilings like this were popular in mid-century America, in basements, in particular, because of the Do-It-Yourself culture and relatedly, the concern for frugality. While drywall installation requires expertise, a handy homeowner could (and can) install these tiles relatively easily, with adhesive, or attached to furring strips. I think that tile ceilings like these also were much more popular in renovations of existing houses from pre-war days. You could use them to cover right over plaster walls that were in bad shape… or just to “modernize.”

Note, the plain white tile ceilings in our bedroom (and before that, the TV room) were not “drop ceilings.”  They were not “temporarily” covering plumbing or electric that might need to be accessed. They were hugging the ceiling (attached to furring strips) and meant to be fixed solutions. Nor do I think they are properly called “acoustical tiles” — that wasn’t their principal purpose.

Do I “recommend” this look? I think the decision is purely a personal one.