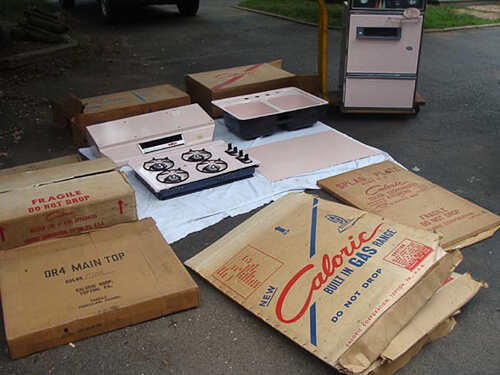 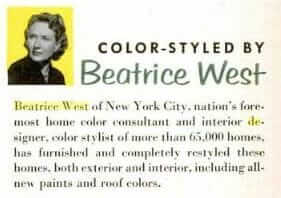 Reader Nancy recently made an exciting and valuable discovery in a neighbor’s pile set out for the trash man: A set of vintage Caloric kitchen appliances and sink — New Old Stock, still in the original boxes. Including: Built-in oven with warming drawer (?), gas cooktop, splash back, range hood, double-bowl sink, and brochures. Oh: In luminous pink pink pink. Five years into the blog, and I don’t see this too often. Moreover, I became very intrigued when Nancy asked me if I knew anything about Beatrice West, who was credited on one of the boxes for the color styling. I LOVE learning about — and helping to rediscover — once-famous, now forgotten (?) design personalities from the mid-century years. Read on for what I’ve found out about Beatrice West — oh, and see 15 more photos of Nancy’s NOS pink kitchen loveliness — which she is looking to sell. 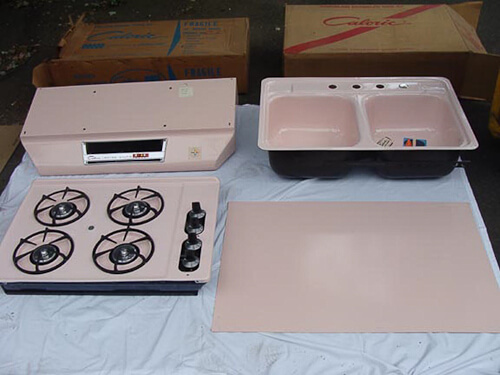 Hi Pam! This is such a great find! I found them in the garbage!! 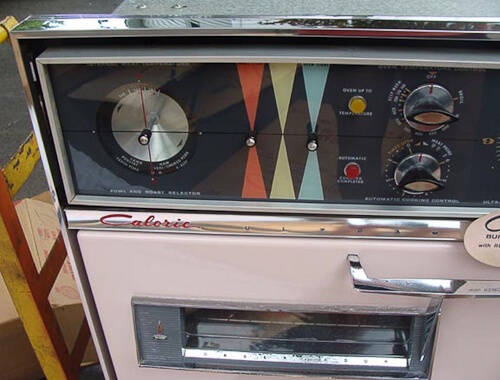 Yes in the garbage! 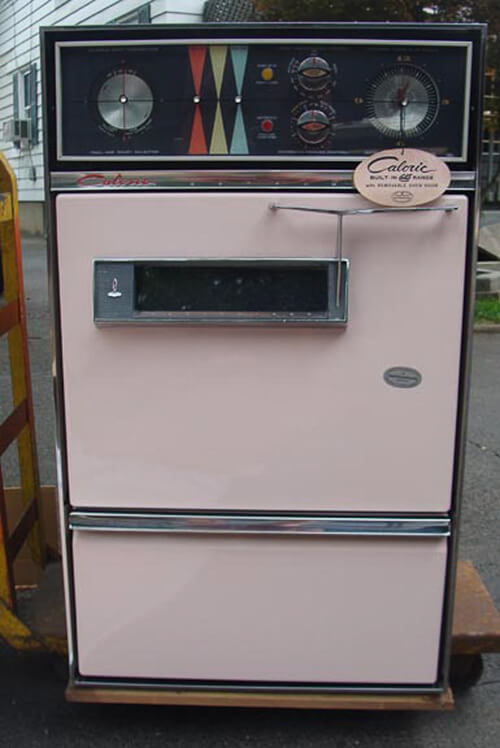 My elderly neighbor died, and her grandson bought the house and basically threw everything in the house out! 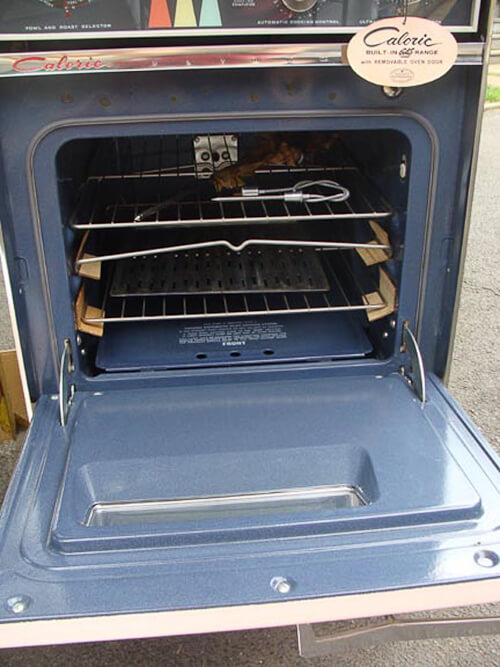 When I saw the pile of boxes I had to investigate! 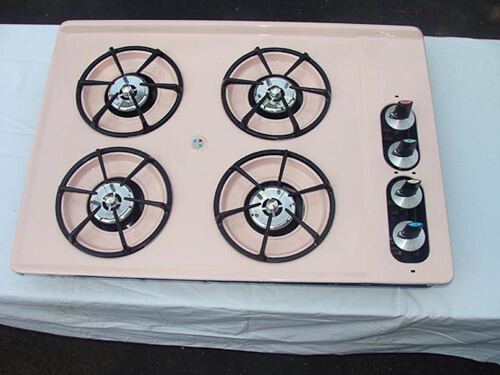 When I saw what it all was I almost fell over! 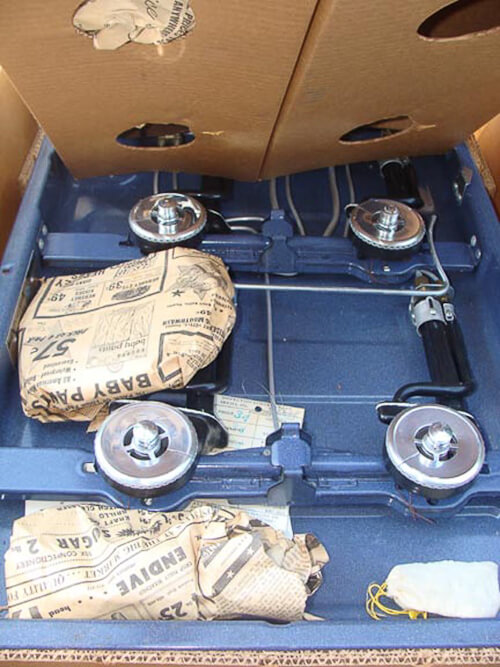 I got my husband and I loaded our truck! None of it has been used, the oven still has the tag on it! The only thing missing is the part that goes under the knobs of the gas stove top. I have half of the box for the stove (the other half was just crumbling). 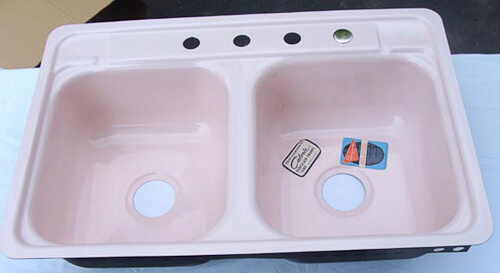 Its all made by Caloric! 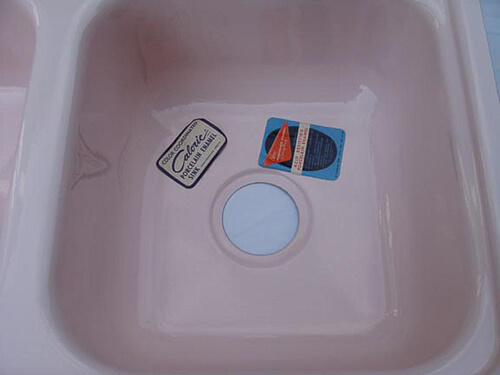 I can only find the original ad for the stove on the web. 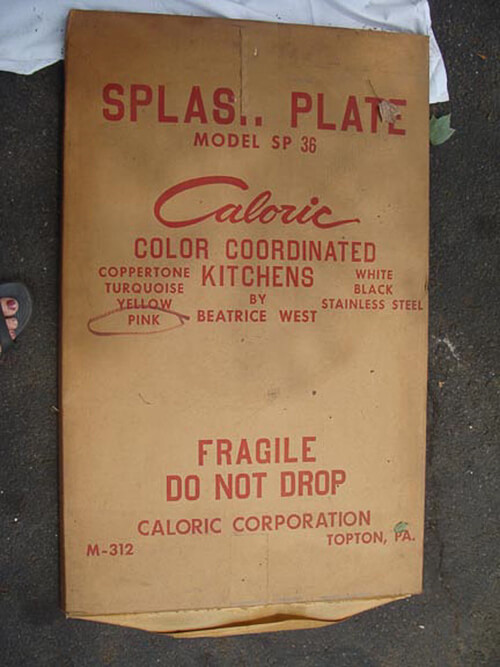 Have you ever heard of Beatrice West? 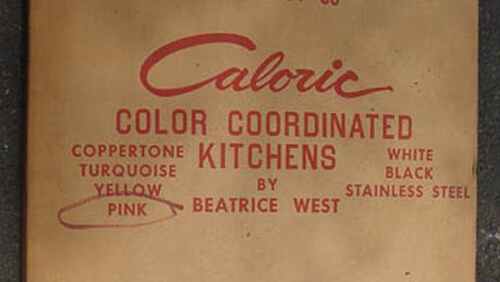 On the boxes it says her name. I cannot find anything like this (never used appliances from the sixties). 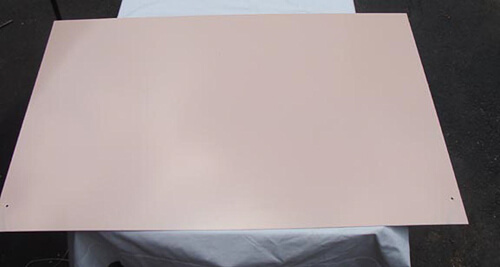 I do want to sell it all, not sure if I should sell it separately or as a package and what to charge… these type of things usually don’t exist!!!:) 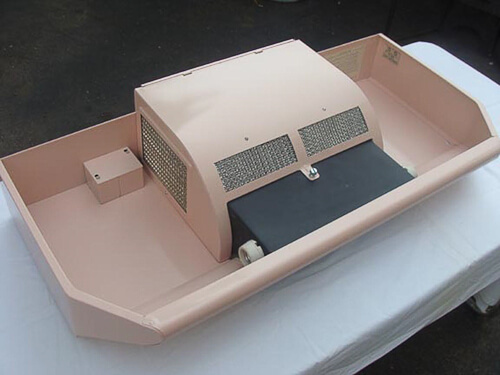 If you have an info on it let me know! 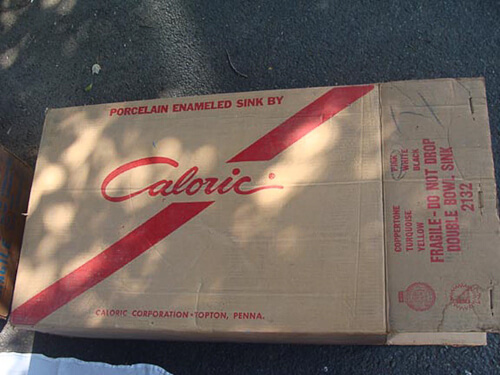 I do have other pics that I could send you, close ups etc. if you want to put it on your web site (which by the way I loooooove!!!) feel free! 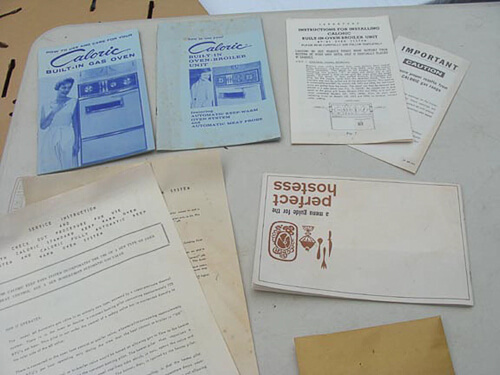 I had actually thought of changing my kitchen and putting in these items but my husband wasn’t thrilled!

Thank you, Nancy, for sharing your story and these photos. I am sure you will find a buyer, these are so delicious.

Meanwhile — back to Beatrice West. When Nancy wrote I began to search on google and was able very quickly to find numerous references to Beatrice West from the 1950s, into the 1960s, and as late as 1981. I have to admit, though, that it was frustrating, because while Google books now archives many many publications, it only gives “snippets” — not the full text, for copyright reasons. I totally understand and respect this. Just sayin’ that my research on Beatrice West is mostly parsing snippets until I can get to the original source documents. 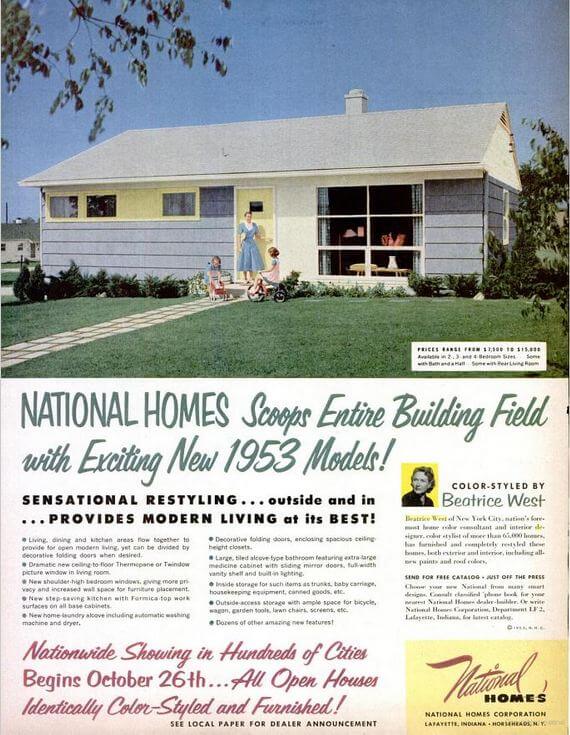 From what I could piece: In the early part of her career, Beatrice West worked as an architect in Texas. Ultimately, she became an expert consultant on the use of color in midcentury America, operating a number of eponymous companies such as Beatrice West Color, Inc. at 333 E. 46th St. in New York City, authoring or co-authoring a number of books, and working with big-name housing developers like Levitt, with manufacturers like Caloric and with retail clients alike. She was a charter member of the Color Marketing Group and its president in 1969, and received the group’s highest honor in 1981.

Update: See Comments below, for additional info that readers quickly dug up, which I need to incorporate up here when I get additional time.

A 1955 Popular Mechanics story on exterior colors for the home says:

An incident that happened early in Miss West’s career best illustrates the power of color. It was right after World War II and despite the housing shortage a development of prefabricated houses did not sell. Miss West, who was then working as an architect in her native Texas, was asked by the prefab manufacture to visit the project and tell him what was wrong. There she found row after row of white houses with blue shutters and mottled roofs of red, blue and green. She worked out a color plan for the entire project of 300 houses and fixed up a model for demonstration fixed up a model for demonstration purposes. All the house were sold in a single weekend and Beatrice West had found herself a new career. Soon she was planning the color for Levitt projects and National Homes.

Looks like she did color consulting for American Kitchens (steel kitchen cabinets):

books.google.com1955 – Snippet view – Tide – Volume 29, Issues 14-27
The 50 homes in Price’s 1955 line were designed by Washington (DC) architect Charles M. Goodman, got their color specifications from specialist Beatrice West. With such an assortment of houses, Price has introduced the full-line theory …
Relative to the Caloric relationship, I found this snippet.. there were others for subsequent years:

books.google.com 1959 – Snippet view – Gas Age: Volume 124
Caloric Appliance Corp. has retained Beatrice West Color, Inc. as color consultant for its products. Miss Beatrice West, president of the consulting firm, has gained national recognition for her design and color work in styling various …
Somewhere there is a film!:
<
books.google.com H.W. Wilson Company – 1960 – Snippet view – Educational Film Guide
Bestwall 1968 13min sd color free-loan sh-c-ad Produced by Photo-Arts Productions ‘ The development and use of color styling by Beatrice West, color consultant, in Cer- tainteed asphalt roofing and siding. Shows how color is used to
She was a who in the Who’s Who of Women in 1961:

books.google.com Dianne Harris – 2010 – 429 pages – Second suburb: Levittown, PA
Beatrice West, a New York interior designer commissioned to furnish the first model houses in Pennsylvania, gave the Levitts high marks for gracefully integrating the kitchen with the rest of the house: “Levitt & Sons have planned your…I would love to get my hands on this one and to hear her presentation!:
books.google.com American Gas Association – 1960 – American Gas Assoc. Monthly Volume 41
Speakers at Home Service Roundtable were, from left: Marjorie A. Bettesworth, Shirley Pemberton, Beatrice West, … The subject of color coordination in the kitchen was thoroughly explored by Beatrice West, color coordinator for Caloric
By 1969, she may have become a design snowbird down in Florida:

It looks like she was doing some work with Eljer circa 1977:

books.google.com Making of America Project – 1977 – House Beautiful, Volume 119 — Selected by color consultant Beatrice West to be in tune with the latest color trends. Eljer’s Fashion Colors let you have a change of heart without a change of bathroom fixtures. Repaint, wallpaper, hang towels and you have a whole new …The last reference I can find to her online is 1981, when she received the Color Marketing Group’s Dimmick Award. They called her “Bea”:

But… This information is so scattershot. What happened to Beatrice West after 1981? Why isn’t there more information available about this COLORFUL woman’s life?! Anything mystery for us to unravel!