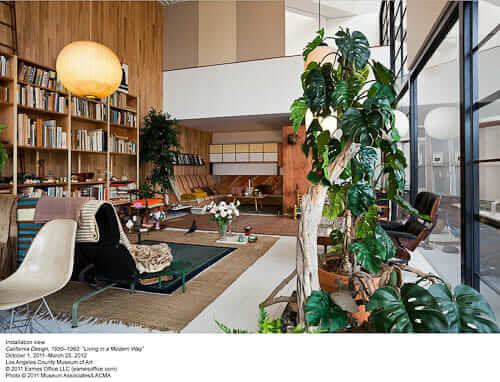 Anyone who lives in or near Los Angeles should be high tailing it over the Los Angeles County Museum of Art (LACMA) as soon as the crowds clear to see the new exhibit, “California Design, 1930-1965: ‘Living in a Modern Way.’” Above: WOW! Charles and Ray Eames’ entire living room — so famous and gorgeous — has been relocated to the museum for this exhibit! Read on for the 2,300-word ‘didactic’ published by the museum. And: I’ve uploaded a slide show of all 23 images from the press kit — fabulous! 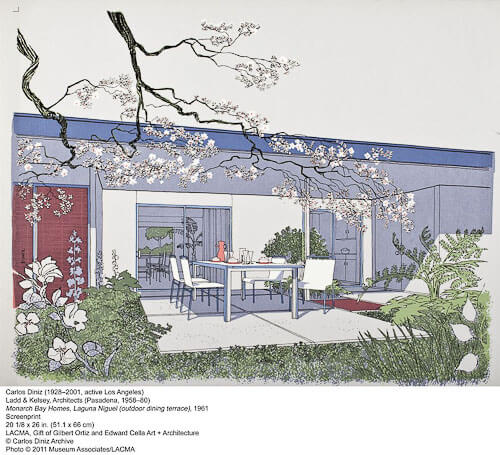 “California Design, 1930-1965: “Living in a Modern Way'” is the first major study of modern California design—examines the state’s key role in shaping the material culture of the country at mid-century. Running from Oct. 1, 2011 through March 25, 2012, the exhibit features more than 350 objects in wide ranging media, including furniture, textiles, fashion, graphic and industrial design, ceramics, jewelry, metalwork, architectural drawings, and film, as well as two period re-creations—most notably the living room from the home of renowned designers Charles and Ray Eames.

“While figures such as the Eameses, Richard Neutra and Rudi Gernreich are well known, we present new context for their work,” said Wendy Kaplan, Curator and Department Head, LACMA Decorative and Design Department. The exhibit also introduce audiences to previously unheralded designers who played an integral role in the development of California design. 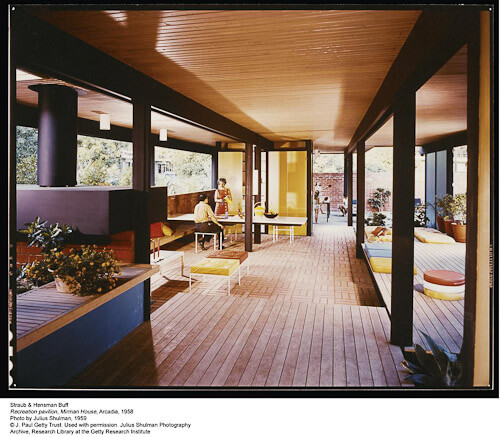 “California is America, only more so,” the author Wallace Stegner famously declared in 1959. Throughout most of the twentieth century, the state symbolized the good life in America. After 1945 a burgeoning, newly prosperous population–intoxicated by the power to purchase after the deprivation years of the Great Depression and the wartime rationing of goods–turned the state into America’s most important center for progressive architecture and furnishings. This exhibition explores how the California of our collective imagination–a democratic utopia where a benign climate permitted life to be led informally and largely outdoors–was translated into a material culture that defined an era.

To tell the story of how California provided the ideal environment for modernism to flourish in a way particular to the state, the exhibition is divided into four sections: “Shaping,” “Making,” “Living,” and “Selling.”

As émigré Greta Magnusson Grossman declared in 1951, California design “is not a superimposed style, but an answer to present conditions….It has developed out of our own preference for living in a modern way.” 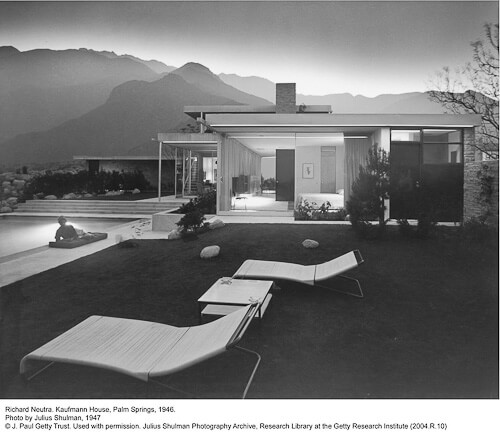 In the boom economy of the 1920s, California experienced extraordinary population growth. As aerial views of Los Angeles demonstrate, millions of new denizens flocked to the states’ urban areas. All these people needed housing and furnishings: the “Shaping” section focuses on the 1930s because that is when buildings and their contents started to be made in modern ways and in modern styles.

By the onset of World War II, these homes and their furnishings were characterized by a particular kind of modernism rooted in California culture and conditions. The general qualities associated with the state (optimism and democracy, fearless experimentation, and a love of new technology) and those specific to design (an affinity for light and brilliant color, an openness to Asian and Latin influences, and an advocacy of fluid spaces and cross-disciplinary approaches) made California’s best products distinctive.

While championing new technologies, innovative materials, and simplified geometric forms, California modernists retained the individuality of the earlier Arts and Crafts movement, the sense of being particular to a place, and a connection to nature. In contrast to the stern moral dictates of the European International Style, a more humanistic modernism emerged here, one that fully embraced comfort and leisure, and responded directly to the environment. 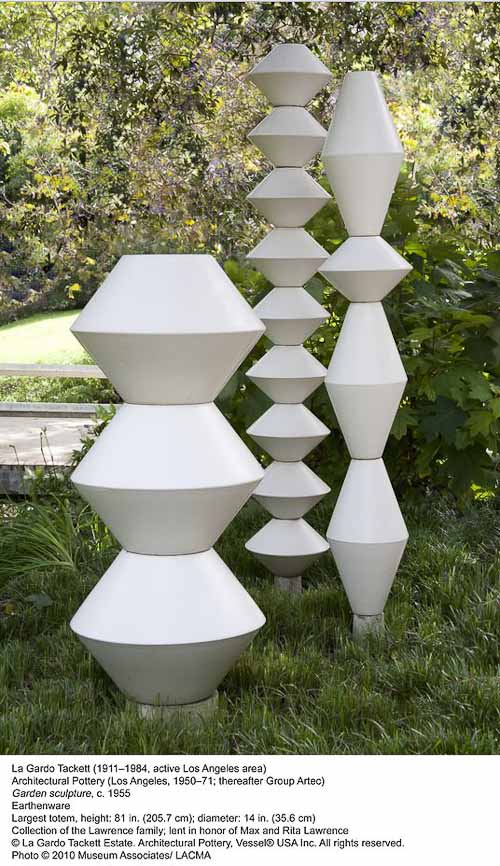 After 1945 the United States became the world’s strongest industrial, military, and cultural power. California played a key role in this development, having dominated defense and aerospace production during World War II. After the war this escalated production had a galvanizing effect on the design and manufacture of consumer goods in the state. Fiberglass, molded plywood, wire mesh, and synthetic resins were only some of the innovative materials developed in the early 1940s that would be imaginatively adapted to peacetime use. For the first time, such materials could be applied inexpensively to products for the home, opening a new middle-class market for California modern design.

California artists working in traditional craft media also responded to the spirit of modernism and experimentation; many tried to adopt new methods of production to make their work more accessible to middle-class consumers. The state became the national model for “designer-craftsman” production–activities that sought to bridge the gap between the studio and the factory. The same qualities that characterized the modern California home–fluidity, openness, experimentation, and the abolition of boundaries–equally applied to the work of the modern California designer. The goal was to provide well-designed homes and furnishings, whether handmade or industrially produced, for the millions of newcomers to California who craved them. 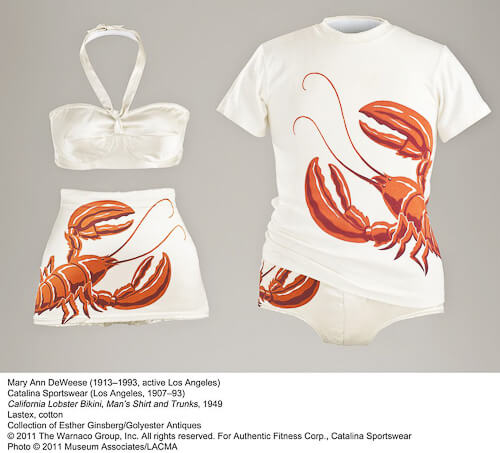 “The people of America have found a new mode of living, and southern California, the richest community in the world, is fostering the economical, colorful, casual California Way of Life that you all enjoy.” — Richard Neutra, The Californian (March 1948).

The climate and culture of California provided the ideal environment for modernism to take root and flourish. Like its counterpart in Europe, California modern was functionalist, anti-ornament, and utopian in the conviction that design and technology could transform society. California practitioners, however, adhered to a looser, warmer, more ad hoc modernism, one almost exclusively domestic in scale. The focus of the “Living” section is the contents of the modern California home, with architectural drawings selected to highlight how such spaces were animated.

California modern was not a single aesthetic but a loose, albeit clearly recognizable group of ideas. It was “democratic” in the sense that it could be achieved by people of modest means. It was characterized by the easy commingling of all kinds of production for the home, whether handmade, industrial, or a combination of the two. It drew on influences from many different cultures, especially Asia and Mexico, for both materials and forms. And it embraced the informality that came with permeable spaces by blurring the distinctions between indoors and out as well as the functions of living, eating, and sleeping spaces inside the home. 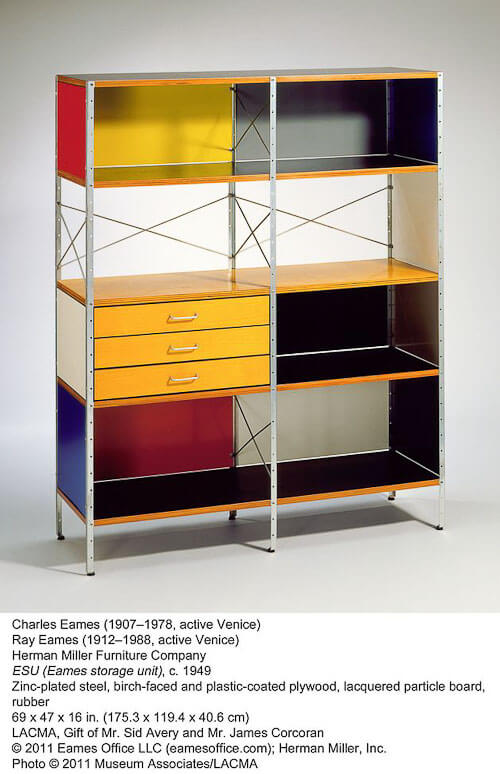 “Good design is seldom accepted,” Julius Shulman asserted. “It has to be sold.” He was referring to his own role in staging architectural photography, but the statement could be equally applied to exhibitions, stores, advertising, publications, and film, which were the principal agents in disseminating modern California design. After 1945 pent-up demand for new products was enormous, fueled by the lifting of restrictions on domestic consumption. A prosperous postwar America required the promotion of a consumer culture. In California, as elsewhere, museums teamed up with retailers and magazines; magazines formed alliances with building and furniture companies. For example, Arts and Architecture’s Case Study House Program was supported with materials donated by the housing industry, and many of its furnishings were provided by local retailers. Such collaborations attest to the fluid boundaries between art and commerce, together with a democratic belief in the integration and equality of all forms of artistic expression.

Descriptions of California between the 1930s and the 1960s portray the state either as a larger-than-life reflection of the country as a whole or as a portent of America’s future; they are usually characterized by a relentless, giddy optimism.

As a journalist noted in 1946, “What America is, California is, with accents, with italics.” Selling California’s products could not be separated from selling the idea of California itself.

See all 23 photos from the press kit here:

Tip to view slide show: Click on the first thumbnail, it will enlarge on your screen…use the arrows below the image to move forward or back…you may stop or start from any image.

.
And, check out this interesting New York Times interview with the grandchildren of Ray and Charles Eames about moving the living room to the Museum.

Link to more information about the exhibit here.