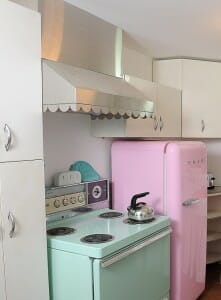 Snaps to reader Laura, who tracked down a company that would make a range hood exhaust fan — with scallops! — for her retro kitchen remodel. What a terrific find. To further research this story, I talked to Donald Stanley, the owner of Vents4Less — which retails the hoods, and to Janet DiRisio, manager of Imperial Hoods — which makes them. Yup: Made the U.S.A. — and since 1961. This is Imperial’s 50th anniversary, yay on them. Here is what I found out about ordering scalloped range hood suitable for a 1950s, 1960s or, yes, even 1970s kitchen project:

How to order a custom range hood: