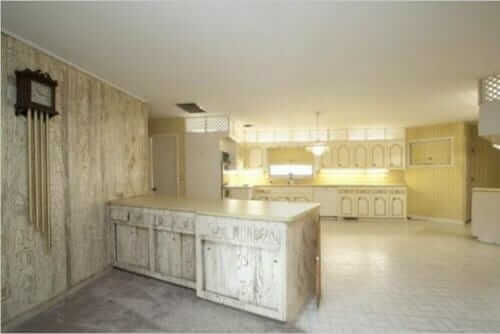 Earlier this year, when we showed this 1955 time capsule house in Tulsa, Oklahoma, we all marveled at the unusual paneling and island cabinet material. No, it’s not pecky cypress (one of my longtime obsessions) No, it’s not not Formica. No, it’s not pickled plywood — well, that’s close. The purchaser of the home, along with real estate friend Robert Searcy, reveal that it is sandblasted plywood, which Robert says also may have been known as wedge wood or have been marketed under the Wedge Wood brand name. Read on –> 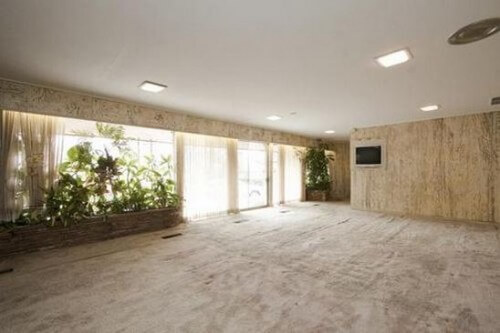 This house was ultimately purchased by commenter R. Shannon, who says:

The paneling you see was created by sandblasting the softer wood leaving a raised texture. Originally the paneling was close to an avocado color with black accents.

Just saw this old post. That raised grain wood paneling was used in a few houses here in Houston and R. Shannon is correct, it is sandblasted plywood. It cannot be duplicated today because the plywood they make now is not the same type/quality and would not hold up to the sandblasting treatment nor create the same effect. In one house I know of the kitchen cabinets were made with this material and the blueprints referred to it as “wedgewood.” I have never heard it referenced as such anywhere else, usually it is just referred to as sandblasted plywood.

Robert’s friend with the house he mentions says that he believes, “the tag (on on the kitchen cabinets, now replaced) said ‘wedge wood, a decorative wood product.’

Thank you, R. Shannon and Robert S. for solving this paneling mystery. So interesting. Since the only two examples we have seen of sandblasted plywood so far are in Texas and Oklahoma, I wonder if the use of this materials was more common in those states and vicinities. A vernacular material used by merchant builders in the region?

Does anyone else have this in their home? I would love to add some better images to our archive.