Plus, we interview Eisenhower historian
Carol Hegeman for details about this historical recipe 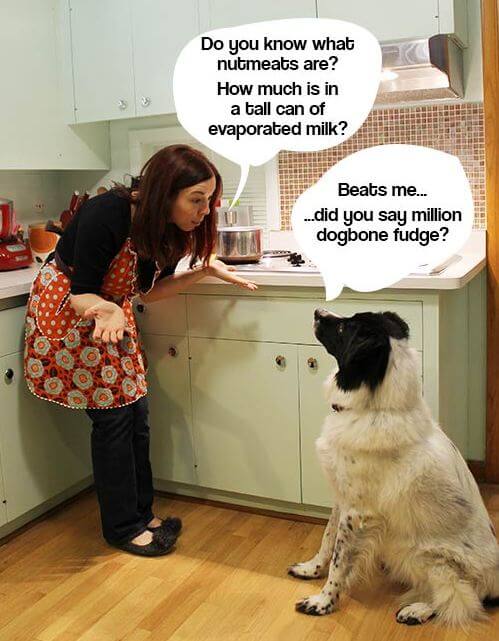 When Pam asked me to try making the first-ever recipe featured on the blog — Mamie Eisenhower’s Million Dollar Fudge — I suspected it had something to do with her not wanting six pounds of fudge hanging around her house. But I like baking and I love chocolate — so I agreed. We know Mamie Eisenhower as the woman who launched five million pink bathrooms. As First Lady, Mamie was a well known penny pincher and coupon clipper — one of the qualities that endeared her to American women. She was massively popular in post-World War II America, so when her fudge recipe was published in print publications, it was an immediate hit. Hey — I can do this, right? Right? 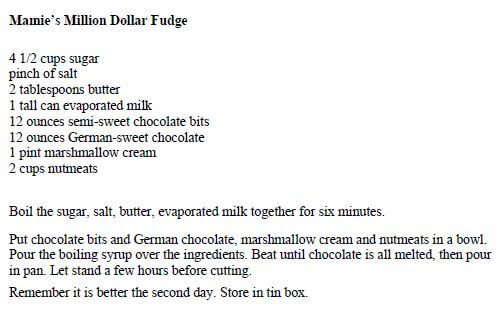 Pam, a Mamie groupie, found the recipe on Wikipedia — it is a PDF provided from the Dwight D. Eisenhower Library — this is an historical document!

I should have suspected from the start that I was a bit in over my head. When I read the recipe, it left me with many questions.

Remember it is better the second day. Store in tin box. 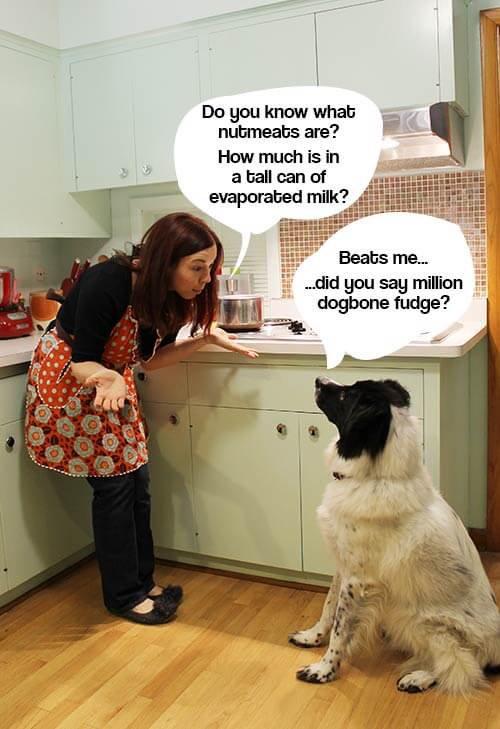 What are “nutmeats”? Unfortunately, my assistant wasn’t much help in this department. Pam confirmed my suspicion that nutmeats are indeed just nuts without shells. And, a quick internet search revealed that a tall can of evaporated milk would be 16 oz (2 cups). Armed with this information, I went to the grocery store to track down the ingredients. 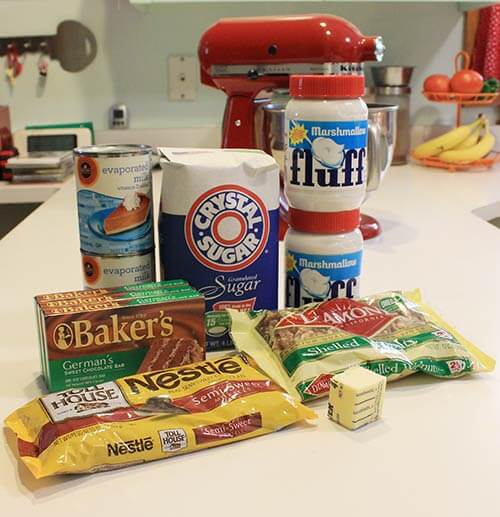 One might ask, “How much does Million Dollar Fudge cost?” Here is a breakdown of my expenses:

(I already had butter and salt)

That isn’t a million dollars, but it felt kinda pricey for a pan of fudge. You could save money buy buying the ingredients over time, when they are on sale. I’ve also seen others on the internet who have substituted Hershey’s chocolate for the German sweet chocolate and left out the nuts for a less expensive and equally tasty version, so if you don’t want to drop nearly $30 on fudge, that would be another way to keep the cost down. However, our quest was for absolute historical accuracy, so I wanted to follow the recipe to a T.

With my ingredients purchased, I set out to see if this fudge really tasted like a million dollars. 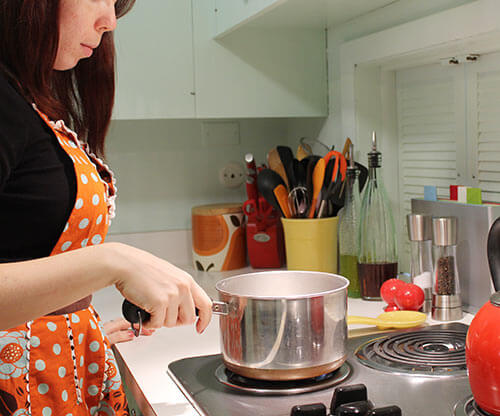 I started with a pot — which I have since decided is not large enough. Once the mixture gets to a boil, it doubles in size. I spent the entire time it was boiling trying to prevent a boil over! If I were to make this fudge again, I would use a MUCH bigger pan. 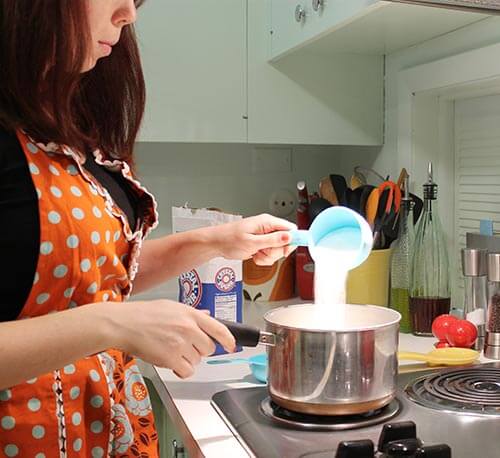 Now comes the sugar. Four and a half cups of it! Just over half of a four pound bag. That’s a lot of sugar. 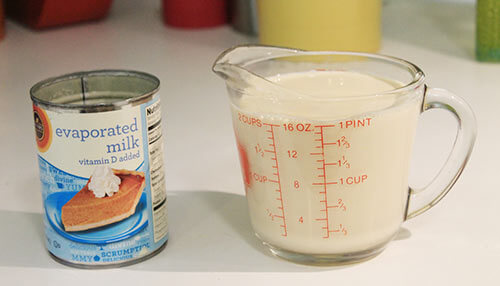 Next add the evaporated milk. I needed just over one can (apparently these are medium height cans) to get the “tall” can of milk the recipe called for. My husband nearly gave me a heart attack because he asked me why pumpkin pie filling was in fudge. I think whoever designed the label on this particular can of evaporated milk could have done a better job with the picture choice. 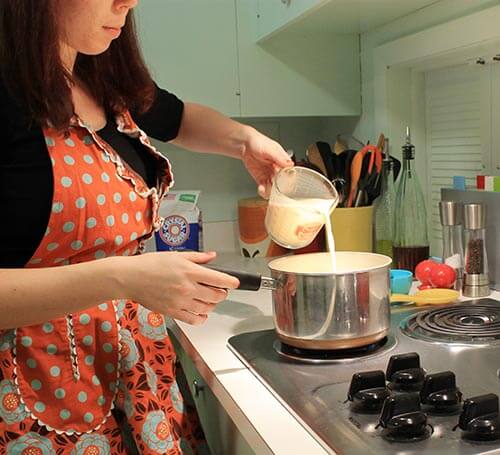 Once you add the evaporated milk, butter and pinch of salt, don’t turn on the stove quite yet. You need to prep the rest of the ingredients so that everything is all ready to go when you have a boiling vat of sugar slurry on your hands. 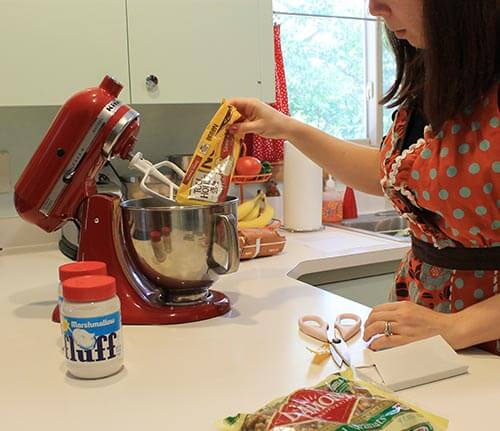 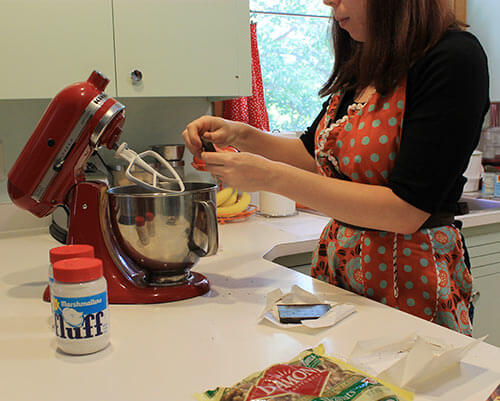 The German sweet chocolate (which you will have to break up)… 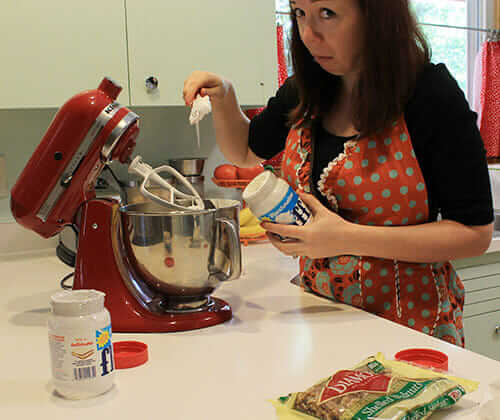 Both jars of marshmallow Fluff. Why am I making this face? I have never used Marshmallow fluff before and quite frankly, it grosses me out. Plus it is super messy and sticky. The whole time I was scooping it out of the jars, I was wondering who actually eats fluffernutter sandwiches — and if they eat them for dessert or for a meal. 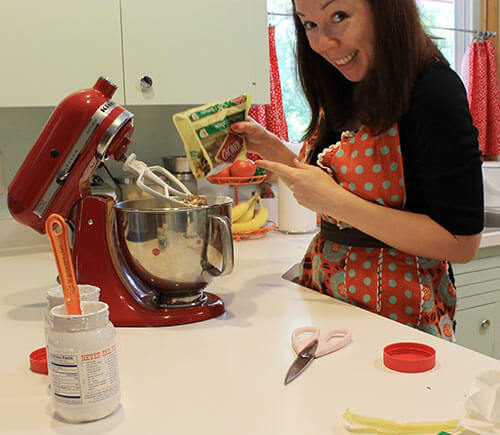 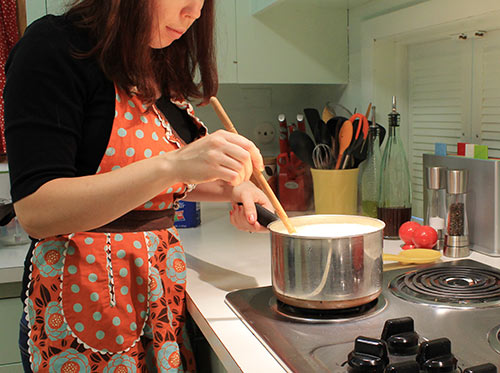 Then it is back over to the stove to start the boiling process. As you can see I’m trying to prevent a boil over in this photo. Save yourself the hassle and use a bigger pan folks! 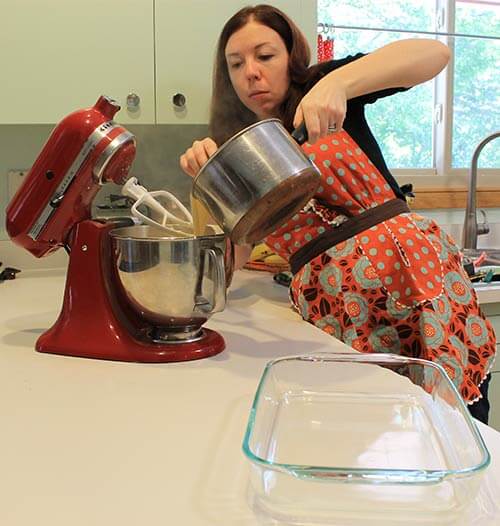 After six minutes of boiling, it is time to pour your syrup over your bowl full of goodies — carefully of course — that syrup slurry is hot. 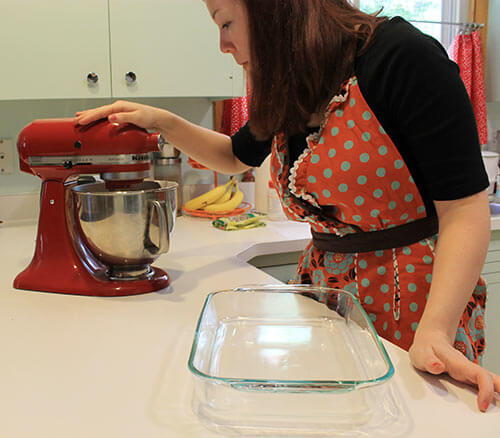 Then stir until all the chocolate is melted — I used the lowest speed on my mixer. 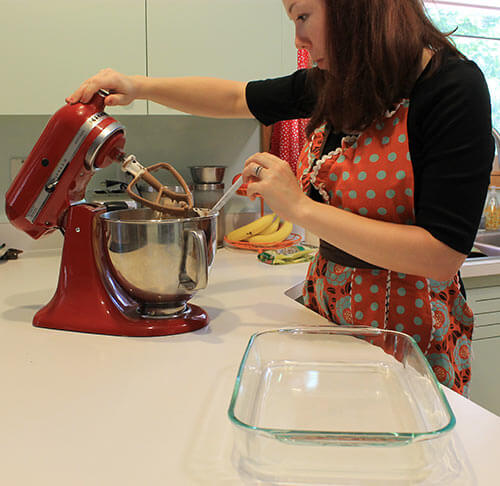 After everything seemed to be well mixed, I checked for chocolate lumps — it was all ready to go — the only lumps were nutmeats. Nutmeats nutmeats nutmeats! 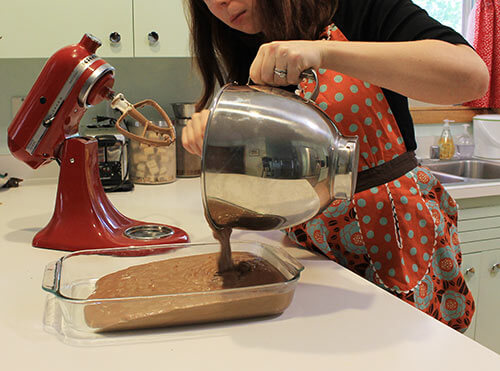 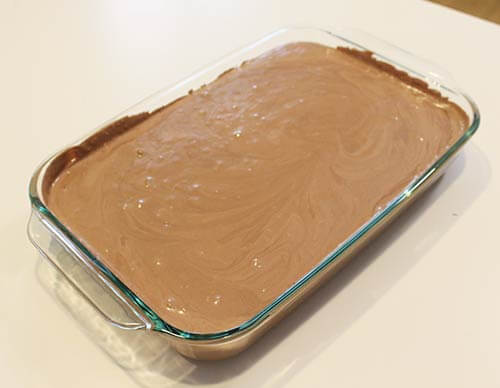 Then all you can do is wait. At least four or five hours and maybe longer to let your fudge set up.

I kept telling myself, “Remember, it is better the second day.”

But then the second day came and it was still the consistency of thick frosting once you broke through the top crust.

I later put it in the freezer to see if that would help, but it didn’t.

I think one of two things might have gone wrong. Either I didn’t boil the mixture long enough (because of the boil over problems I was having — USE A BIG POT! — or because the fudge was so thick it was not setting up very fast at all — USE TWO PANS! 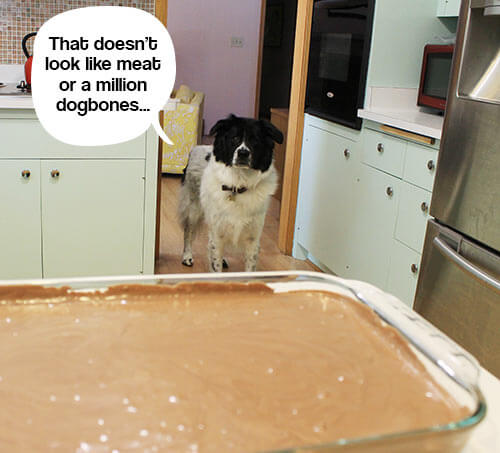 I will say that even in its frosting form, this is some tasty fudge…err…fudge frosting. My husband and I tried to cut a piece out after seven hours to try it and ended up using a spoon, but we both agreed that the taste was delicious.

I’m not quite sure how long it will take to set up — if it ever does — or how many months it will take us to eat six pounds of this stuff, but it is good!

The morning after I made the fudge, Pam was eager to hear how the it had turned out. She knew that it had been slow to set. We had a little chat on Google instant messenger:

me: ummm still runny. I hope I didn’t mess it up! It is the consistency of thick frosting! Tasty though…

Pam: hmmmm. Maybe that becomes part of the story. Put it in the fridge?

me: I think one of two things happened, either I didn’t boil it long enough (it kept nearly boiling over) or it is too thick and taking a long time to set up. I put it in the freezer.

Pam: Did you turn the heat down once it was boiling? I think a low boil would be the preferred, not a boily boil.

me: It was a low boil — anything more than that would have exploded! The stuff doubled in size when it was boiling!!!
I will advise readers to use a larger pan

Pam: Did you use a real heavy pan? Nothing lightweight

me:  I used a Revereware pot

Pam:  yes, I would say that’s too light. I am thinking cast iron or dutch oven, something that holds the heat. but what do I know.
I might have to do this now. Although i do NOT need a bunch of fudge at my house!

me: Yes, I do not need a bunch of fudge either! This is the story of how to make million dollar fudge: or how I gained 10 lbs working for Pam!

Pam: yes haha I will fatten you right up between the fudge and the blogger’s butt syndrome.

There may be a reason why this is our first recipe on Retro Renovation!

History of Mamie Eisenhower and her million dollar fudge

Interested to learn more about Mamie’s Fudge, I contacted Carol Hegeman, Supervisory Historian at the Eisenhower National Historic Site to ask how Mamie came up with the recipe for her famous Million Dollar Fudge. You will recall, we interviewed Hegeman a while back about Mamie Eisenhower and why the pink bathrooms bonanza.

Surprisingly enough, Carol doubts that Mamie came up with the recipe herself, but verified that the recipe that Pam found was the real deal — which concerned us since Mamie’s recipe has been adapted many times. To bring home her point that Mamie didn’t author the Million Dollar Fudge recipe, Carol sent a few sample pages from a book called Ike the Cook: Dwight D. Eisenhower : General, President and Cook (affiliate link) by Edward and Candace Russoli, which surprisingly made me feel a little better about my fudgetastrophy. Apparently Mamie wasn’t the best cook — it was Ike who ran the kitchen:

Luckily Ike had been cooking for years and was quite handy in the kitchen, because Mamie knew nothing of the culinary arts. She had grown up with a family  cook, so the only reason to wander into the kitchen was to ask for a cookie. She did make one effort to learn something when she joined a cooking class at the Y. However, she only stayed long enough to learn how to make mayonnaise. “I was a cooking-school dropout,” she laughed. But Mamie was Ike’s biggest supporter, and with her ringside encouragement he perfected his pot roast, successfully seared his steaks and flipped his flapjacks with finesse.

Mamie’s culinary claim to fame really was her fudge. It was such a family favorite that Ike christened it “Mamie’s Million Dollar Fudge.” Even though she could only actually make the candy and mayonnaise, Mamie kept a recipe file of a dozen or so Eisenhower family specialties which she was always happy to share with anyone who asked. Some of her file cards included recipes for Devil’s Food Cake, with Seven Minute Frosting, Frosted Mint Delight, Deep Dish Apple Pie, Tomato Pudding, Fluffy Turnips, Sugar Cookies, Danish Tomatoes, Baked Seafood Casserole, Baked Caramel Custard and General Eisenhower’s Quail Hash.

Oh oh. Pam just google messaged me wanting to talk about Devil’s Food Cake, Frosted Mint Delight, Fluffy Turnips… and Quail Hash. Holey nutmeats, what have I gotten myself into this time?

Have you ever tried to make Mamie’s Million Dollar Fudge?
If so, did yours turn out?
What did I do wrong?