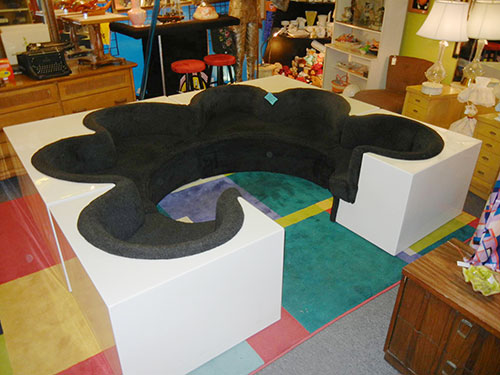 Yowza. This is one spectacular sofa — and it’s is currently for sale at Room Service Vintage in Austin, Texas. The proper name for it appears to be Archizoom Safari Livingscape sofa. The Architonic website shows a version of the Archizoom Safari with animal print upholstery, and says it was designed by the company Archizoom in 1967/1968 for Poltronova. They call it an “icon of 20th century Radical design,” although Wikipedia’s wiki on Archizoom also introduced me to the term Superarchitecture. Superarchitecture, indeed.

Thanks to Room Service Vintage for giving us permission to feature this 1960s Italian beauty. We put the photo in real big, too: Click on the thumbnail to luxuriate in the beauty of it all:

Lori at the store told me that this furniture came from the original owner. I actually spotted this photo on Room Service Vintage’s Facebook page… via Mod Squad Picking’s Facebook page (I like to give credit, cuz love makes the world go round.)

Anyway, the Archizoom Safari Livingscape sofa sectional is for sale at Room Service Vintage for $7,500. That sort of sounds like a lot — except that the auction listing archived on the Architonic page valued the model archived there at 30.000-40.000 Euros, which calculates to $39,000 to $52,000. I don’t know whether these two examples make for a truly apples-to-apples comparison, but either way, them sure are some nice apples.

I dug some more on the intertubes, and found the news release for the 2003 auction. The relevant bit says:

Radical Design, which came up in the late 1960s in response to “good” Italian design, was an attempt at modifying the general perception of modernism through utopian ideas and visions. Two significant works offered in the sale were created by chief protagonists of this movement: the Safari livingscape by Archizoom Associati (1967/1968, € 30,000 – 40,000) and…

This academic treatise also looks interesting (I still need to read it all): It refers to Archizoom and the aesthetic of the Safari sofa — including some original quotes from the period indicating that designers were apparently aiming for this sofa to flaunt all precepts of “good taste.”