Big news in Columbus, Ohio, and across retro-world: On July 13, the Ohio Historical Society will open a new exhibit about life in the 1950s that includes an amazing centerpiece:  A 1949 Lustron house that has been completely assembled inside the museum. Lustron houses are famed prefabricated houses built from 1948-1950 – notable because they are made almost completely from steel inside and out, including everlasting gobstopper porcelain enamel painted interior and exterior walls and roof.

I spoke recently with Cameron Wood — history curator for the exhibit – and now one of the “World’s Lustron Masters” – so-dubbed because he led the team that has been reassembling this historic little house piece-by-piece-by-gawshdarned piece. We talked all about Lustrons… about reassembling this “Westchester” model… and what sounds to be a terrific new exhibit. Let’s hear all about it, and look inside–> 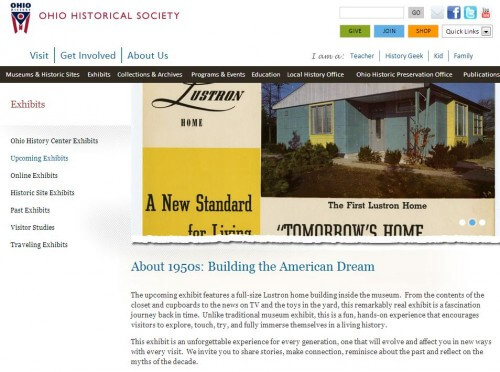 Arlington County, Virginia, donated this two-bedroom Lustron to the Ohio Historical Society (OHS). The OHS had the Lustron shipped in pieces to Columbus… and now — still in process as this story is published — with the help of volunteers, the OHS is proceeding to reassemble it, piece-by-piece like an erector set… like a giant 3-D jigsaw puzzle. Columbus residents also have donated furniture and accessories. It’s not too many days to the opening of the exhibit on July 13 — will they get the house done in time?! Punch list crunch time, just like with any house project!

This museum exhibit – “1950s: Building the American Dream” — will be “immersive”. Instead of “please do not touch”, visitors will be invited to open the drawers and see the family accounts, sit on the couches, peek in the closets – they will be able to experience first-hand just what it was like to live in a Lustron. More good news: The house will be in place for at least five years – so you have time to get there.

So, I talked to Cameron.

Pam asks: Tell us who you are and your role the project.

I’m part of a team of four from the Ohio Historical Society that has been managing this project. I’m the history curator assigned to the project – in charge of assembling the house and the stuff inside. There have been a lot of volunteers involved in the reassembly project, I oversee them.  I’m where the rubber meets the road.

We also have a designer involved and an educator who is working on the programming that will be in place once the exhibit is open. 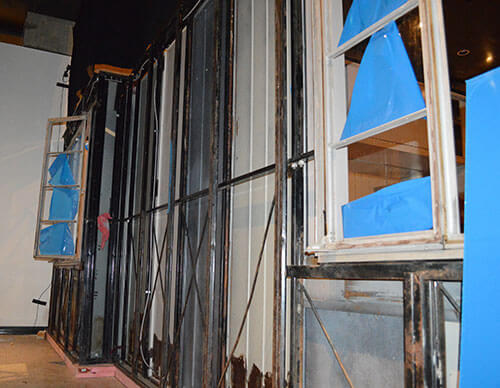 Q: I read that the house now assembled in your museum came from Arlington, Virginia. Can you tell us how it came to you?

Lustrons were originally built in Columbus, and we’ve been keeping our eye on a couple looking for one to display. Last year, for example, we found one that was available – but we would have had to buy the house and the land, take the house apart, and ship it here for reassembly.

This would have been costly, Wood told me.

[But then] We had a connection with the Arlington County Historic Preservation Program. This house became available. Arlington gave it to us. We had to get it shipped and a donor did the shipping in-kind. 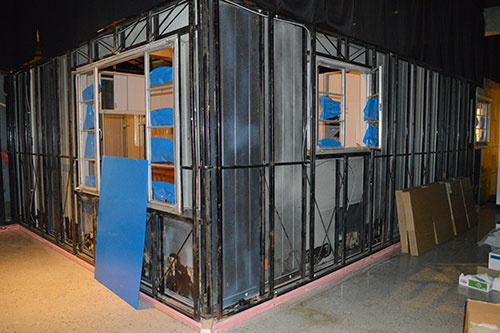 I ask Cameron who the shipping donor was, wanting to give props. Way to go, Columbus Truck and Equipment Company Inc.! Thank you for supporting historic preservation and education and your community non-profits!

I went to connect some more of the historical dots on the provenance of this particular Lustron house. I found that this exact same house also was partially reassembled first at the Museum of Modern Art in New York City, for an exhibit on prefabricated houses entitled Home Delivery: Fabricating the Modern Delivery. Here is archival audio introducing the exhibit.

Digging further (oh, how I love and want to marry the internet) I found the original news release from Arlington County when they loaned the house to MoMA:

“In April 2006, the County Board accepted the donation of the historic, all-metal Lustron house from property owner Dr. Clifford M. Krowne. Over the course of a month, the County then disassembled the building and placed it in temporary storage….The Krowne Lustron House, built in 1949, is a Westchester Deluxe 02 model with two bedrooms, one bathroom, and 1,085 square feet of living space on one level. Arlington now has only five of its original 11 Lustron homes.””

I also spoke with Cynthia Liccese-Torres, Acting Historic Preservation Program Coordinator for Arlington County. She was a leader on the team that saved the house, disassembled it, shipped it to MoMA, then placed it with Columbus.

She told me that the house was Lustron Serial #549. (We historical house geeks get all excited about itty bitty details like that.)

She told me that seeing the house go to Columbus was a “bittersweet” experience…. the house had become “like my third child,” she said… but in the end, she underscored, the Krowne House ended up in a wonderful place — Columbus, original home base to Lustrons, and with OHS, which has the Lustron archives. You and Arlington County did a good thing, Cynthia. xoxo 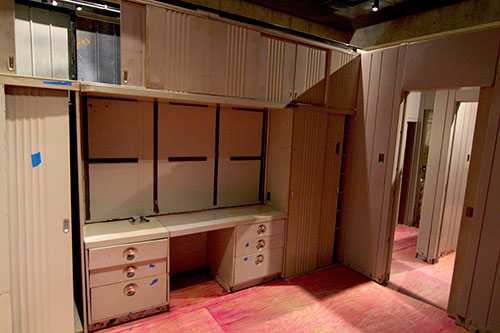 Back to Cameron Wood… Q. I think I read once that Lustrons were built at the same factory where the Tucker automobiles were built…?

Actually, I think the story is that Tucker had a plant in Chicago, where Lustron originally wanted to be. Tucker beat out Lustron.

So then, Lustron found space in Columbus, in a manufacturing plant that had been building aircraft during World War II. 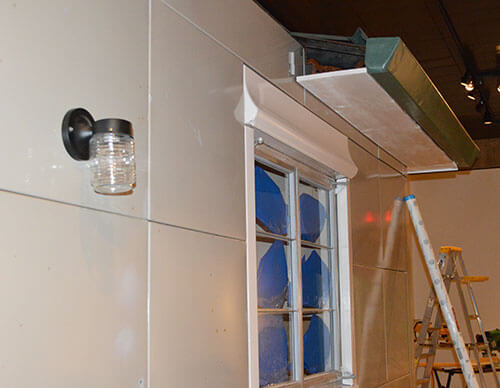 Here’s some more of what Cameron told me about Lustrons:

The National Trust for Historic Preservation reported here that only about 1,500 Lustrons remain in place today.

I also asked Cameron what he knew about why Lustrons failed.

Cameron told me, “There was a whole list of little reasons that the company failed.” These included:

Other factoids I found on the helpful Wikipedia* page, *recognizing that Wiki is not always an authoritative source:

Q. So how long did it take to reassemble the house?

We started last summer. The house pieces came in a jumble in the back of a box truck. First we needed to pull them out and organize them for assembly. We worked with volunteers one day a week to get it laid out.

We started actual reassembly of the house as the beginning of November [2012], working two to three days a week we had the majority of it finished by March. But, we’re still doing tiny little things here [as of June 18, 2013].

I can only guess that reassembling a Lustron from bits and pieces must be “some therapy.” So I ask: 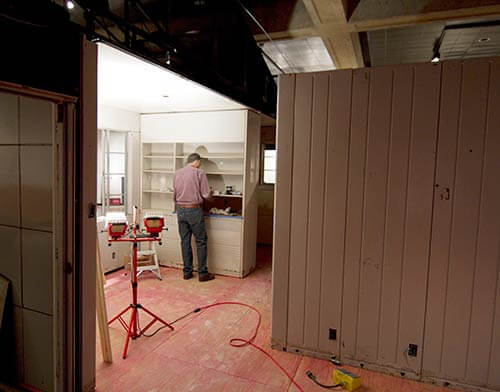 Q: So, after all the work of reassembling the house, do you love the Lustron more… or less?

I still love the Lustron – probably a little bit more. When I first opened the truck, the house pieces had been stored for a while… packed and repacked. It didn’t look like it would come out very well.

Now that it’s done, I love the Lustron a little bit more. The Lustron proved itself a hardy little house.

Q. Tell me about reassembling it…

We have the manual with instructions to erect the house, but it makes a lot of assumptions about what you might already know and is a little confusing. The hardest part was the framework – putting the roof trusses and structure together. Some of these parts looked similar. Which part goes where? It was like a giant erector set.

I can now say I am one of the world’s Lustron’s Masters. There are very few of us.

Q. But weren’t the pieces numbered when the house was disassembled?

Yes, but it was spotty as to where, and how, they were numbered. Part of the job was deciphering what the different labels meant. For example, we learned than N, S, E, or W meant which direction the house was facing… those go together. In other cases, there were numbers. What does it mean when it’s marked “12”? We had to figure that out.

We agreed: It would be much easier to be on site to lead the disassembly of Lustron that you then planned to reassemble elsewhere, so that you create a reassemble-by-number cheat sheet of your own.

Q. What do you find most fascinating about the Lustron house?

Cameron also pointed to the ingenious way the pieces fit together, but adds, “If the company had been around 10 or 20 years, they could have worked out all the kinks.”

I ask for examples, based on his reassembly experience, of how the design could have been improved for assembly. He says, for example, if an exterior panel is damaged, you can only get to from one side (rather than either side) of the house. He also thought that some of the specialty pieces could have been standardized, given more time for further improvement… It’s difficult to access the water and electrical systems… The gutters were apparently one of the first things to fail…. And it would have been cool to see a design with two floors, such as a colonial.

Moreover, “They could have worked out a better instruction manual, that’s for sure,” says the Lustron Master.

Get thee to Columbus after July 13, 2013, peoples, and bring the kids, because this is an exhibit they can mess with.

I quiz Cameron and he confirms that museum staffers have given the pretend“family that lived in this Lustron names: They are/were dad Bob, mom Dottie, son Jimmy and daughter Mary. These were the most popular names in the years each character was born. Their rooms are furnished, their closets are stocked, and there will be children’s programming with fun and games in the back yard. The goal is to show how a real family lived in the 1950s.

At the same time, though, aspects of the exhibit will point to some of the serious social and economic issues that clouded the 1950s, such as racism and the Cold War.

“The original idea was to give people an enjoyable time. But, the 1950s wasn’t all Happy Days. There were issues and problems and we wanted also to dispel some of the nostalgia,” Wood said.

What else did I learn from Cameron?

So there you have it.
From one of the world’s Lustron Masters.
I see a road trip to Columbus, Ohio, in my very near future.
How about you?

This Lustron House is #41 on
our map of 59 mid-century and modern historic house
museums you can visit. Check them all out here: 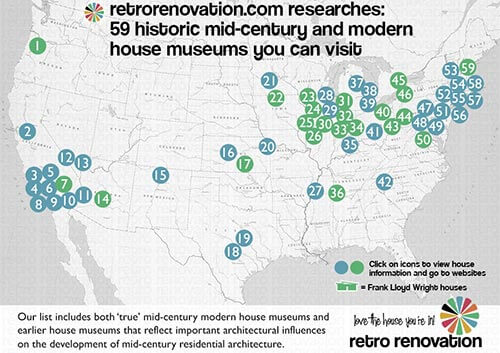