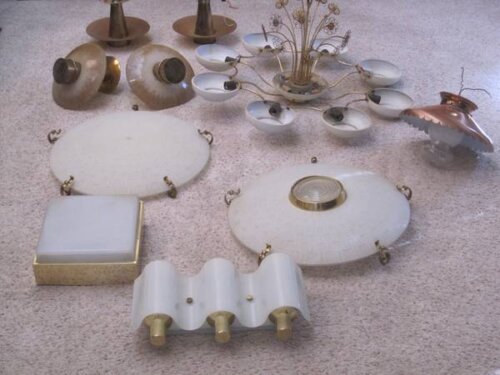 I talk a lot about both “mid-century modern” and “mid-century modest” — but a point I want to underscore with this story — with these photos — is that in mid-century homes, the two styles were often combined. Perhaps better said: These seven vintage lights — all from the same house — show how “pure” mid-century modern design began to take on more decorative flourishes consistent with the mainstream market’s preference for … pretty. How… the styles began to blur.

Okay: I’m still working out how to say this exactly… complicated by the fact that I don’t quite know how to draw a circle around “what is a pure mid-century modern” light. But I’ll continue in any case — I welcome your comments — especially from readers properly schooled in the finer points of mid-century modern design.

The lighting above is one big set that came out of a mid-century house in Colorado Springs. The set is currently for sale on craigslist — and also just listed on ebay — thanks to reader Amy, who spotted it — and thanks to the seller, who gave me permission to show all these photos. Ogle the pieces and you can see: It runs along a continuum from “almost” lacking in unnecessary ornamentation… to atomic looking — but with flowers!… to flat-out mid-century modest, clearly seen in the Early American style scallop-edge coppertone light fixture. The fashionable owner put all of these fixtures in his fashionable house — presumably with no aesthetic cognitive dissonance whatever.

I prompted the seller to check and she reports that yes, all but the kitchen light are Lightolier. I found two of them — Pacemaker collection — in this vintage catalog from reader Gretchen of Eichlerific. 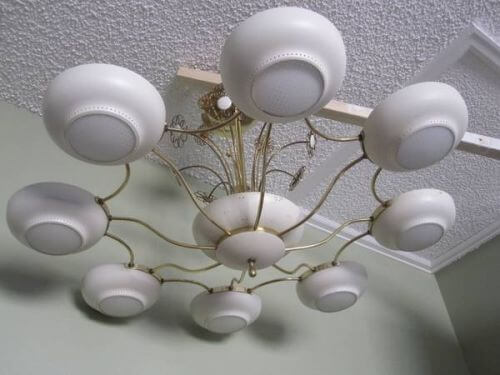 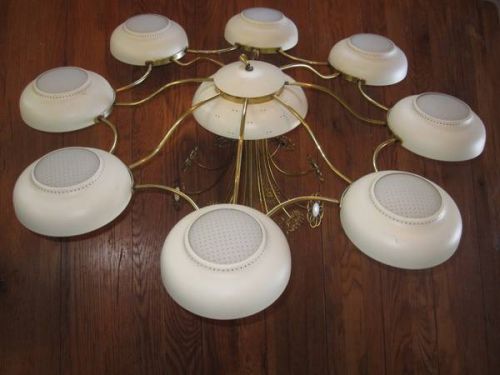 Above: The vintage Lightolier chandelier is fantastic — a real show stopper. 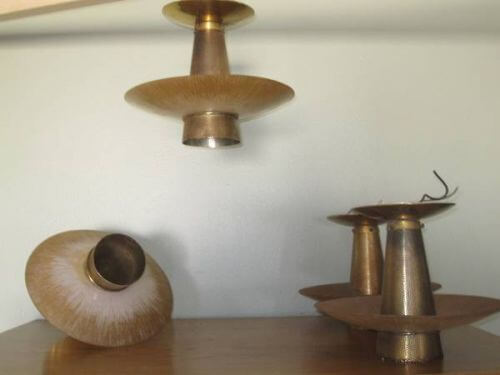 Above: These ceiling spot lights are lovely, notable for the slip-over glass decorative shade thingies that aren’t really there for any purpose but decoration. 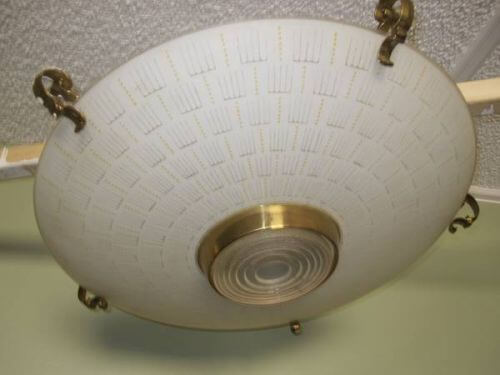 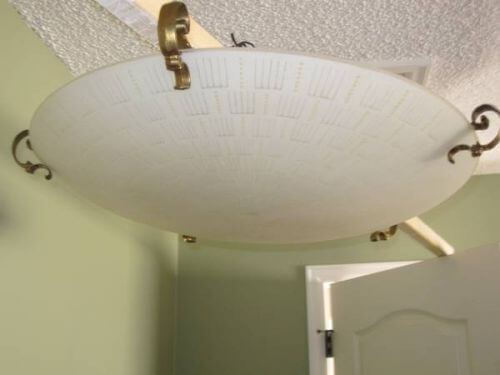 Above: The two pieces I identified as being part of the Lightolier Pacemaker line. 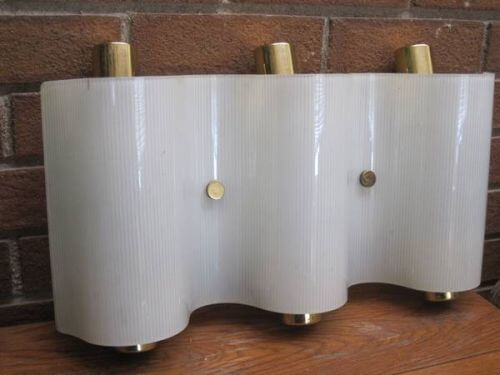 Above: I loved these wave-shape, ribbed sconces by Lightolier. LOVE THEM. 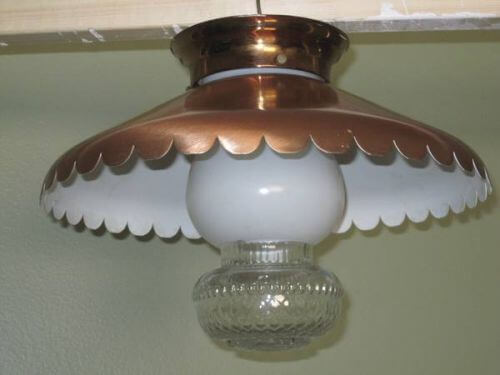 And above: The coppertone Granny Ranch style fixture for the kitchen. People loved their flashy, sophisticated modern — but they loved their comfy cozy Early American, too. YES: The two can live in happy harmony!

Another example of the modern-modest mashup:

Above: Frank Lloyd’s houses are known to have had pink bathrooms. Here is what reader Kevin said in our story about the Gordon House:

Both the kitchen’s Chinese Red Micarta plastic laminate, and the pink ceramic tiles were fairly standard specifications for Usonian houses. I have seen both in quite a few Usonian homes, and have some original Wright specification booklets, and those two items are common. The third Mrs. Wright sort of fancied herself a color expert, so there is some thoughts that she could have been responsible for favoring the tile color. The Wright house I used to live in did indeed have the pink bathrooms, but not the Chinese red Micarta. The Wright apprentice designed home we now live in also has the original Chinese red plastic laminate, which I have posted on here a while ago.