Exciting news — readers Marty and Flip tipped us off to a source for Weldtex — a type of plywood with a striated effect milled into its top ply that was a popular, affordable decorative treatment for siding, ceilings, wall coverings and more in the 1950s. Thanks to the folks at Eichler Siding, you can buy this popular material again today — in 2012, the company began producing Weldtex, making it available for the first time since the 1970s. Now, let’s learn more about Eichler Siding… the fascinating history of Weldtex.. and look at photos — old and new — in homes. 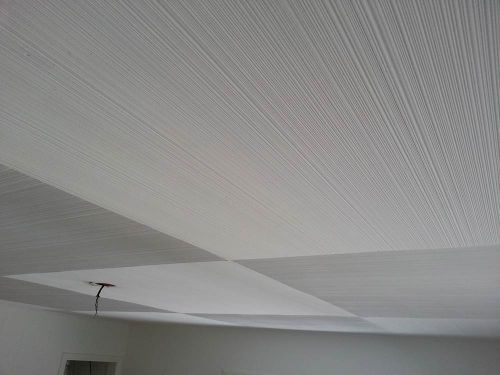 We purchased the house my parents built in 1950 and have been working hard on the renovation. Wanted to share the ceiling story and a supplier website that we found in California. Can’t wait to get the new ceiling up downstairs.We have some pics of the original striated ply ceilings from upstairs that we are going to continue with through more of the house. 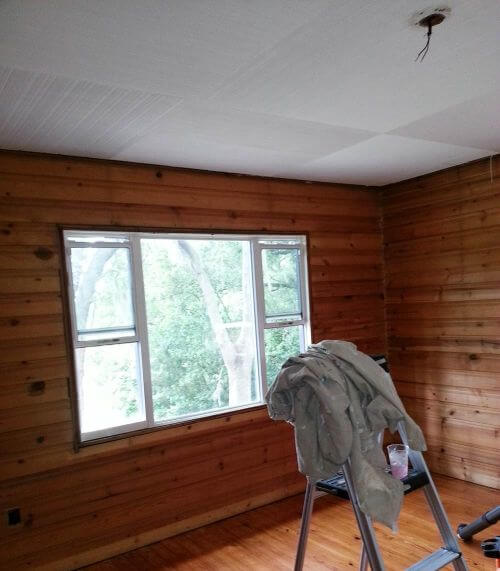 We are so pleased to hear you’re doing a story on the striated plywood and Eichler Siding. Jeff and his wife provide a quality product and are fellow small business folks. They were easy to work with and it was a coast to coast shipment that arrived in good shape to us in Florida from San Fran! Attached are some photos of the original ceiling in our house and we found a huge bonus surprise behind some junky wall paneling, pickwick pine paneling!!!! Our ceiling project is still a work in progress so we don’t have any of the new stuff up yet but we can tell it will be a fantastic match.

I researched the history of the striated plywood and it is a very interesting story. The old advertisments for it are awesome, gave us some cool ideas.

Coinkindinkly, we also just spotted Weldtex ceilings in a 1960 time capsule in Tulsa, Oklahoma — see it here  — this time with a natural wood finish. Stunning!

Eichler Siding got its start in 1987 after owners Jeff and Annette Nichols noticed a niche they could fill in the market. At the time, homeowners looking to repair and restore the original grooved siding on their Eichler and other midcentury homes couldn’t find a source for the specialty grooved plywood they needed to get the job done. Eichler Siding came to the rescue — manufacturing several popular siding patterns as well as taking custom orders.

In 2012, the company began producing Weldtex striated plywood again — the first time this style of plywood had been produced since the 1970s.

For over 25 years we have produced Eichler style siding for San Francisco Bay area homes and beyond. We deliver locally, and we ship nationwide via common carrier. We also can produce a variety of custom grooved interior and exterior plywood panels for both mid-century modern homes in the Eichler style or replicate plywood groove patterns that are no longer available. 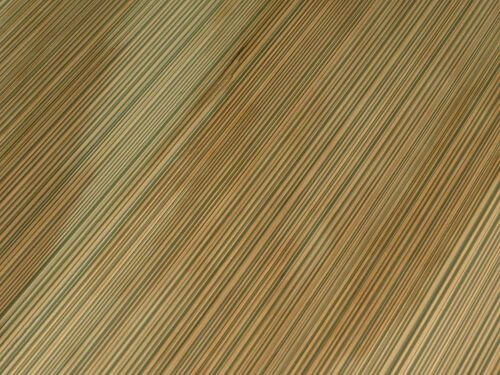 Additionally, as far as we know, we are the only producers of “Weldtex” also commonly known as “Combed or Striated Plywood.” Invented in the 40’s, Weldtex is a very unique panel that was used as accent walls, wainscot, or even an entire room. We have shipped Weldtex to New York, New Jersey and Southern California. 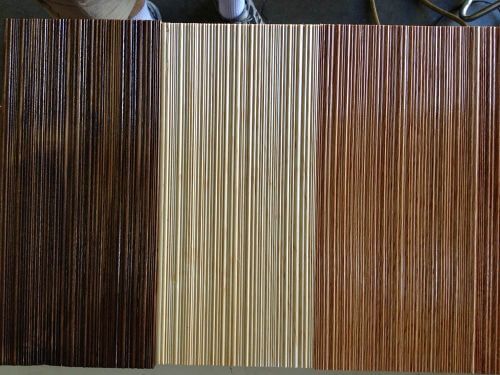 Weldtex Panel Weldtex, which was originally manufactured by U.S. Plywood, has not been made since the 1970′s until now!

Note: Though we do not produce a 48″ wide panel, due to the nature of the unique Weldtex, or combed pattern, when you join two long edges together the joint appears to be seamless. So in reality you could cover an entire wall with the panels and never know that there were narrower than 48″ 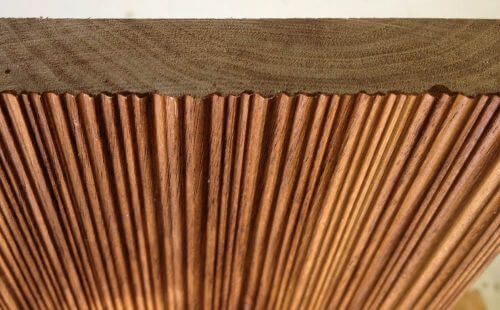 Edge view of 3/4″ solid stock walnut showing the depth of the Weldtex pattern. 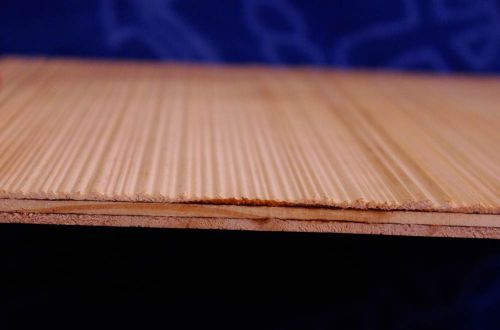 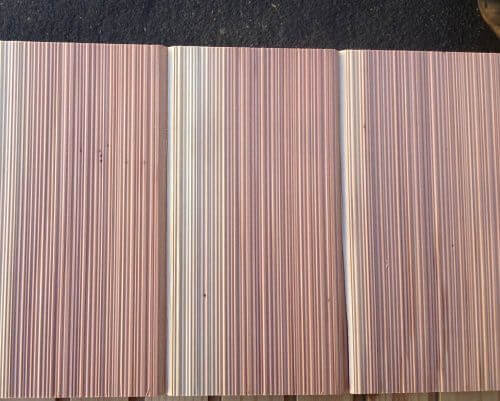 Here’s a sample of 1×6 tongue and groove clear “A” grade redwood with the Weldtex texture milled into the face. We also added a V-groove at each joint to match the existing pattern a customer in Tulsa, OK has. The same material can be milled without the V-groove for a more continuous look. We can also mill this out of clear western red cedar, or pine for an interior application, like a wainscot installation.

History of Weldtex: ‘The antithesis of the sleek modern look’

Weldtex was developed by Donald Deskey — a talented American furniture, graphic and industrial designer — and was introduced commercially in 1940. While it was originally marketed as a low cost, decorative material for post-war prefabricated housing, the combed plywood became popular in the 1950s as a do-it-yourself, inexpensive way for homeowners to gain valuable living space by finishing and decorating their attics and basements or as a quick and easy way to cover and repair up cracked plaster ceilings. 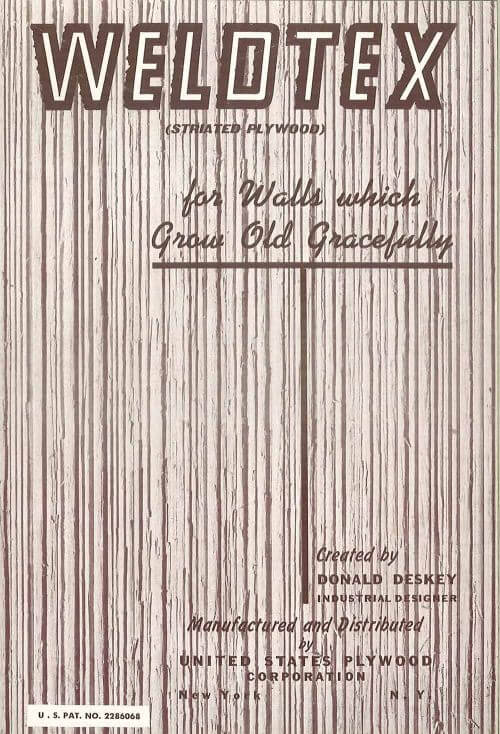 As a designer, Deskey had a reputation for experimenting with new materials throughout his design career, for example, working with cork, asbestos and plastic laminate.

Advancements in the process of plywood production — namely the invention of a resin that remedied the material’s ability to stand up to moisture, combined with its low cost and utility — made plywood an attractive material to Deskey. By this point in his career — even after having been a successful “modern” designer himself — Deskey had grown tired of the sleek modernist aesthetic and believed that Americans wanted to return to more traditional, rustic look in their homes. After experimenting with inexpensive Douglass Fir plywood samples for several years, the idea for Weldtex came to Deskey. By cutting groves in the face of the plywood, Desky could both mask the less attractive grain or the cost effective Douglas Fir veneer while also creating “scratches” in the surface — the very antithesis of the sleek, modern look.

More on Weldtex from a paper written by Mary Ottoson, M.S. Historic Preservation at the School of the Art Institute of Chicago:

According to a 1945 excerpt from the profile of Lawrence Ottinger, then President of the United States Plywood Corporation, Deskey felt that, “since scratches were the bane of modernism, he got the idea of scratching all surfaces so thoroughly that generations of careless housemaids and cocktail parties could do nothing but improve them.”

The name “Weldtex” was chosen as it directly refers to the resin adhesive used that allowed for the plies to be welded together as well as to the texture created by Deskey‘s gouged striations.

Weldtex offered three main physical advantages. The first advantage was that the “expansion and contraction” were “minimized” because the striations relieved surface tension. Second, was the inherent advantage that the resin adhesive and hot-press offered, which rendered the wood “impervious to rot…alcohol, oil, mild acids and alkalis” as well as to “bacterial deterioration.” A 1941 USP catalog prominently listed the advantages of Weldtex. Third, the surface striations masked imperfections such as grain irregularities, warping and checking, joint lines and attaching materials such as nails. Though traditionally cut Douglas Fir was frequently used as varnished trim, Douglas Fir veneer was not considered handsome. In fact, its grain was typically considered rather distasteful. The striations that Weldtex provided allowed for a cheap face ply with highly decorative and attractive results. The vertical striations created a textured panel which played with light and shadow. Also, by rotating or installing the panels in alternating directions or diagonals, interesting and unique patterns were created.

After joining forces with the Unites States Plywood Corporation, Deskey set to work coming up with ideas to use Weldtex in prefabricated housing as a decorative and utilitarian feature instead of as a strictly structural element as plywood had normally been used in the past. Deskey also wanted to change the way people saw prefabricated housing. Instead of thinking of prefab homes as a solution to an emergency like a housing shortage, Deskey developed a prefab vacation home called ‘Sportshack’ that could be easily and inexpensively erected in rural areas as a hunting cabin, ski lodge, etc. Deskey’s use of Weldtex as siding on his prefab Sportshack mimicked the rough bark of trees in the forest surrounding it. Sportshack was part of the Metropolitan Museum of Art’s “Contemporary American Industrial Show” in 1940, and the 1939-1940 New York World’s Fair receiving wide acclaim.

During the same time, Weldtex had been prominently installed in the Collier’s House of Ideas in New York City — a model home located in Rockefeller Center. With so much excitement building around Weldtex and Sportshack, Deskey decided to start his own company — Week-End Cabins — to sell Sportshack plans. Unfortunately, it was not to be — as the manufacturing of Weldtex was halted due to wartime regulations during WWII, putting an end to Deskey’s dream.

I can think of about a hundred ways you could use Weldtex — from building furniture, to using it as siding or wall treatments. Heck, I bet it would even look good in a tiki bar. It is so exciting to have this vintage material with such an interesting history available to buy again.

Mega thanks to readers Marty and Flip for sharing their photos and source for Weldtex with us and to Archive.org for making this great vintage brochure available to the public.