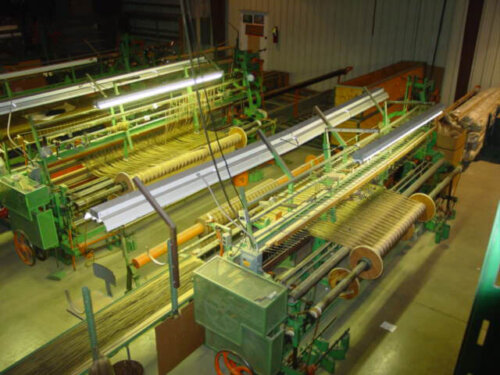 As our miniseries about Beauti-Vue yarny woven Roman shades [and more] continues, we want to underscore just how special these shades are — not only are they 1960s- and 1970s-tacular as design objects, but they were made in the USA in a process that involved craftsmanship unlikely to be replicated here any time soon.

During Kate’s recent visit to Beauti-Vue — which still has 50-year-old New Old Stock retro woven material available to be made into custom Roman shades — owner Stormy Grumbeck explained the process the company used to weave the 12′ rolls of material back in the day.

Making them was a very labor intensive process: 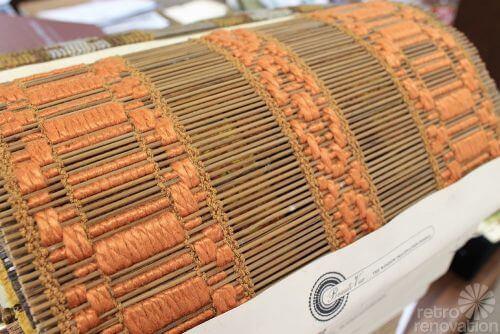 Most of Beauti-Vue’s woven wood blinds were made using a simple over/under weave, but they do have a few styles — such as their Jacquard weave blinds — that were much more involved because it was not just a simple over-under type weave. These more complicated weaving styles used four or five different shuttles to complete a woven design instead of just one shuttle for their more simple styles.

Beauti-Vue no longer has any of these massive weaving looms. They tried to sell the looms a few years ago and thought they had found a buyer in China and also Vietnam, but because of strict import rules imposed on textile manufacturing machinery, they were ultimately unable to sell the looms. They ended up taking them to the scrap yard.

At the peak of woven wood blinds’ popularity in the mid 1960s and early 1970s, Beauti-Vue’s Wilkes-Barre plant had 24 looms that took up 38,000 square feet of floor space in a three-story building.

These looms would weave wooden blinds 24 hours a day, but still couldn’t produce enough woven woods to meet the demand – these were VERY popular! The Beauti-Vue plant in Wisconsin (where Beauti-Vue continues in operation today) only had a few of these looms. They used them for testing weaving patterns and to make special-order products.

One such special product was weaving a shade so that the yarns spelled out “McDonald’s” for the popular fast food restaurant chain. In fact, company owner Stormy Grumbeck says that they did a lot of business selling woven wood shades and valances to fast food restaurants during the late 1960s and early 1970s – the gaudier the color combinations, the better. Stormy also recalls making custom-design yarny woven wood shades for motor home companies that wanted their own specific color palettes.

Stormy says that interest in the woven wood blinds started to fade in the late 1970s. Beauti-Vue continued production in Wilkes-Barre plant up until the early 1980s and in Wisconsin through the mid- to late-1980s.  According to Stormy, from the late 1960s to the early 1990s there were only three or four major weavers in the United States – including Beauti-Vue. Domestic weaving was phased out in the early 1990s, when pre-woven, cheaper products from China and Taiwan started being imported and became widely available.

To produce Beauti-Vue’s line of colorful woven wood blinds, the company used yarn, chenille yarns and even carpet yarns in the weaving process. 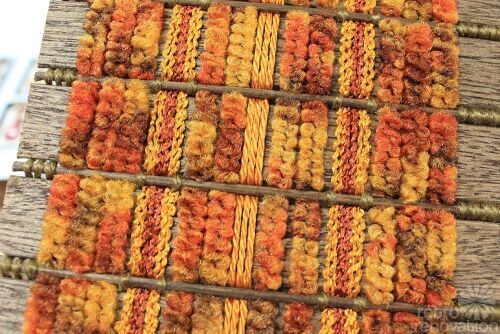 Yes: This is carpet yarn, purchased from the same manufacturers making this color of shag (or whatever) that year! Woven into “Marengo” wooden blind.

Stormy says when they were figuring out what designs and color combinations to use in their new collections, they would call up carpet companies and ask them what color carpet yarns would be used to create their new carpet styles in the coming year. 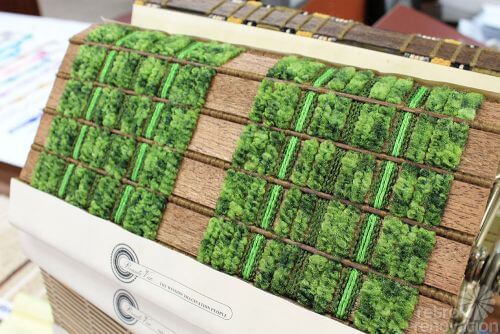 Then, Beauti-Vue would buy spools of carpet yarns directly from the carpet company, so they could weave the same yarns into their woven wood blinds for that season and exactly match all of the new carpet styles. Can you just imagine having a room with these yarns in both your carpet and your blinds! Amazing! 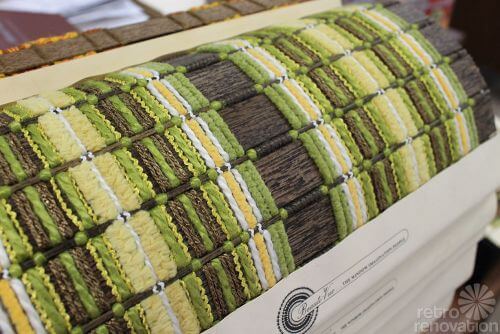 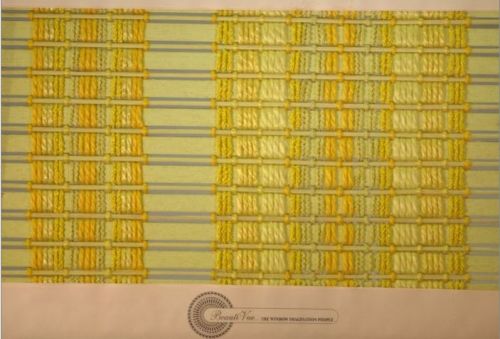 … and then interest in those colors waned and colors like Daffodil became all the rage. Tee hee. Good times.