“The house has amazing color theory and is a stunning example of early 70s design. It feels like an immersive piece of art.” — Matthew Reader 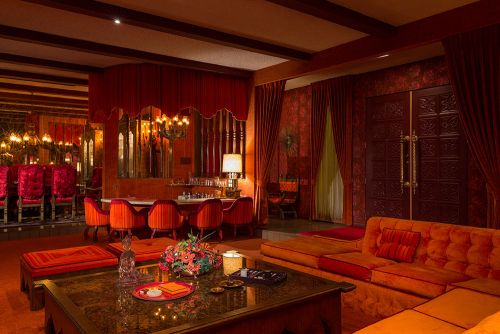 What words? Plush, lavish, regal, colorful … epic! This 1965 Palm Springs time capsule home — which was redecorated in glamorous 1969 style by the home’s second owner Jack Stephan, “Plumber to the Stars” — is currently listed for sale by Matthew Reader of Paul Kaplan Group. Almost all of the home’s 1969 decor and furnishings remain intact. Back in 1969, the interior redesign cost $150,000 – that’s a whopping $968,321 today! You will be amazed, we promise — thanks to the 23 photos, courtesy Lance Gerber of Lance Gerber Studio. 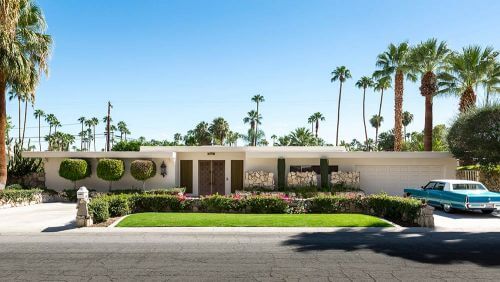 Jack Stephan founded his first business, Jack Stephan Plumbing & Heating, in 1946, and Adee Plumbing & Heating in 1949. The company is still in business, run by two of his sons. By the time he bought the house and redecorated it in 1969, his business must have been booming, because the decorators working on this house seem to have been given a blank check. Even so, Jack Stephan seems to have been bemused by his own extravagance and dubbed his estate “Stephan’s Folly.”

And the “Adee Do!” in our headline? That’s from Stephan’s local TV commercials. What a hoot! NOTE: That’s actor Wally Sherwin in the commercial, not Mr. Stephan.

This house — it’s fantastique! From the listing:

This grand 3,250 square foot estate style home is a showcase of design and Palm Springs style. This exceptional mid-century property was designed by architect Robert Lewis and constructed in 1965, and it is located in Deepwell Estates, one of the most desirable neighborhoods in South Palm Springs. This impressive home was made for entertaining, and it is rich in local history. Deepwell had many celebrity residents, and Loretta Young, Julie London, Jack Webb, Eva Gabor, Liberace, and Elizabeth Taylor all lived on Manzanita at one time.

The current incredible interior was designed and installed in 1971 [note, Matthew says further research indicates: 1969], and every surface has been meticulously maintained and preserved. The home was the 2015 recipient of the PS ModCom’s prestigious Residential Preservation Award. 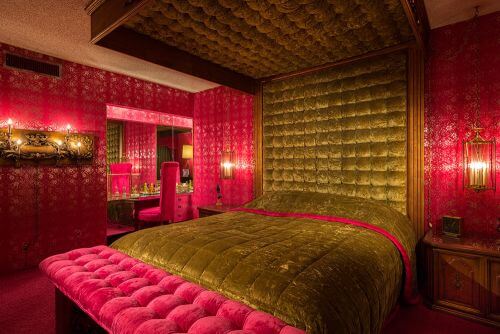 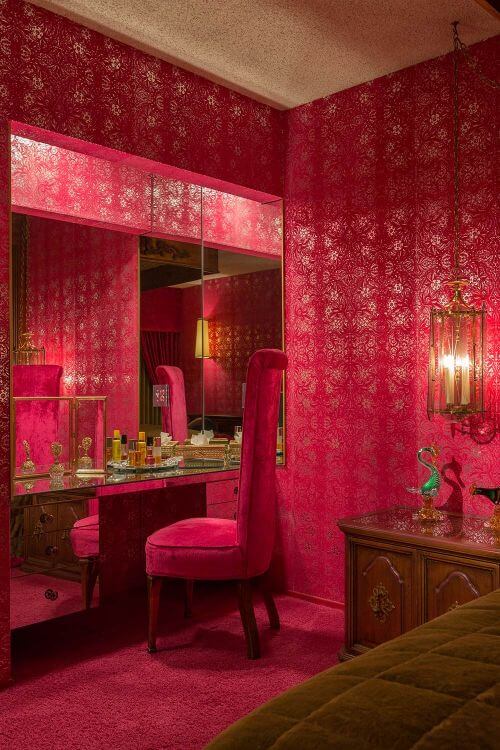 “There are 16 different types of wallpaper and fabric cohabitating in perfect harmony from red to orange, and pink to fuchsia.”

Stephan’s Folly has been so extraordinarily preserved that the Palm Springs Modern Committee just awarded its current owner of the home — Ross A. Klein — with a Residential Preservation Award. Realtor Matthew Reader, who sold the house to Klein, made the presentation and shared his introductory speech. It includes more background information (edited a bit by us for use here):

Adee do! Those words were drilled into pop-culture posterity thanks to Jack Stephan, a flamboyant entrepreneur with a flair for marketing who founded two of the region’s most heavily advertised plumbing companies in Southern California: Adee and Stephan’s Heating and Plumbing. 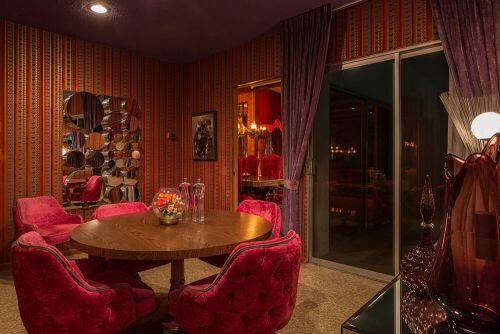 This fabulous residence, constructed in 1965, was designed by Robert Lewis & Associates. Originally built for Dr. & Mrs. Sanford Ehrens, it was later purchased by “Plumber to the Stars” Jack Stephan in 1969, who gave it the name Stephan’s Folly. Mr. Stephan founded Jack Stephan Plumbing & Heating in 1946, and Adee Plumbing & Heating in 1949. He passed away in 2014 at the age of 96 and left the home to his third wife of forty-five years, Barbara.

Ross purchased the home sight unseen after he was encouraged by yours truly of The Paul Kaplan Group. I was literally face-timing Ross from the house. He said it was love at first sight. 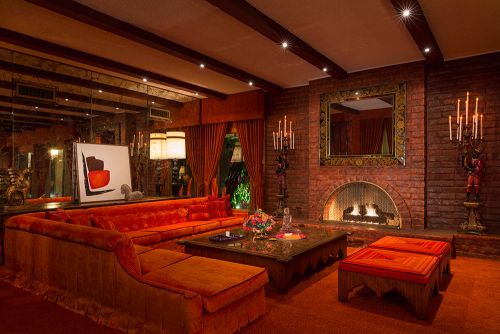 Ross says he was inspired to buy the house because of the history of the previous owners and the exquisitely maintained period interior decor and custom furnishings. The house has amazing color theory and is a stunning example of early 70s design. It feels like an immersive piece of art. There are 16 different types of wallpaper and fabric cohabitating in perfect harmony from red to orange, and pink to fuchsia. Every lampshade and light bulb is spec’d to match the light fixture. 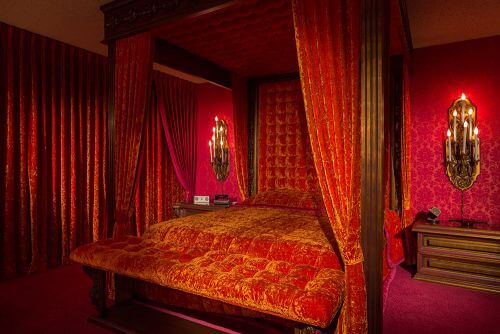 The Stephans were incredibly social and many great card games and parties of Palm Springs luminaries were hosted at the house.  Mrs. Stephan was very generous in leaving many period accessories in the home from books and games, and cards and shufflers, to the Jean Naté and chafing trays for guests!  In keeping with his attention-grabbing advertising style, Stephan drove Rolls-Royces and maintained a flashy wardrobe, including mega-carat diamonds and suits in his favorite color, red. 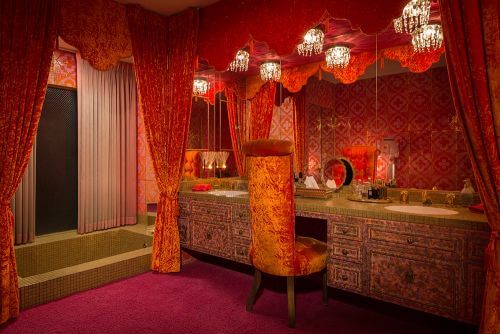 The interior is almost entirely original. In fact, the only items not original to the design are some of the appliances that were replaced over time. The house was the epitome of chic luxury and Palm Springs style. 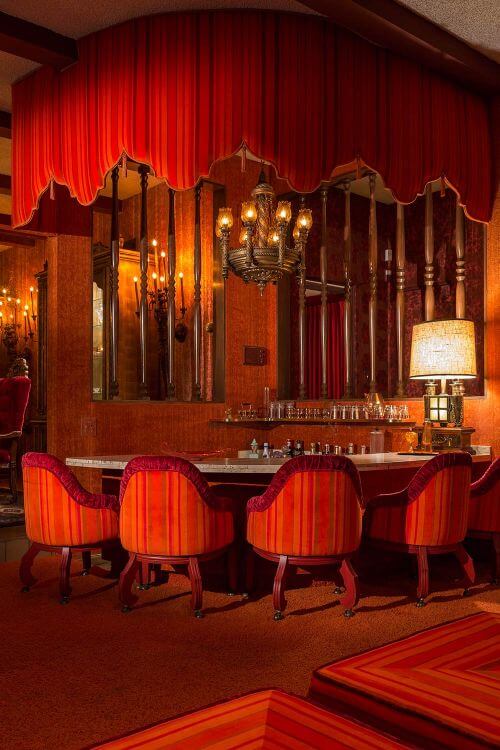 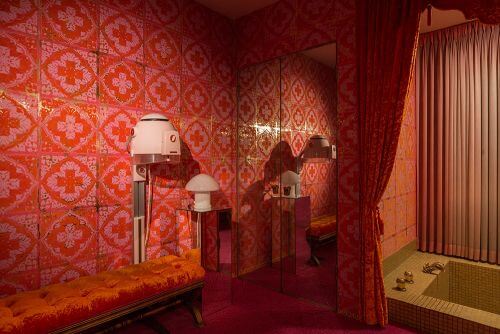 Every piece of furniture was custom designed, with many pieces featuring hand-applied gold leaf. There are matching fixtures in 23 karat gold, and up-to-date modern luxuries like electric drapes, a movie screen, 12 carousel 8-Track Player, and NuTone Sound System. There is even a professional salon hair dryer. 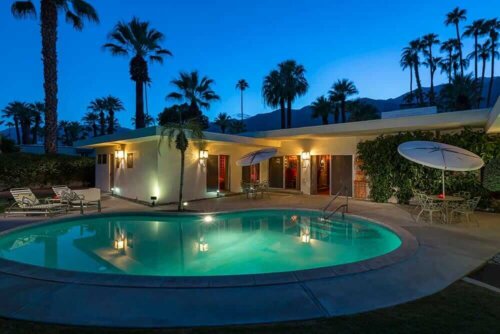 In contrast, the exterior is much more restrained than the interior. While the house was always “please, no smoking,” guests were given gold leafed wooden matchboxes inscribed with “Stephan’s Folly.”

On the phone with Matthew Reader, Pam discussed how to categorize the home’s interior design. How about: Arabian Nights meets Moroccan meets Hollywood Regency Taken As Far As it Can Go meets…. Steak House?! Indeed, Matthew says that everytime he goes into the house he immediately starts craving a steak, a baked potato and a Manhattan. “Even at eight o’clock in the morning,” he laughed. He underscores that inside, smoking was never allowed — the house does not feel musty or old. Pam declares that this home may not really be a “time capsule” — it’s a “time machine.”

Reader also told us that it’s believed that the interior redesign in 1969 cost $150,000. We went over to the online CPI Inflation calculator and that translated to nearly a million dollars ($968,321) today. That said, we don’t think you could even replicate these interiors today — some of these materials would be very difficult, and expensive, to find! 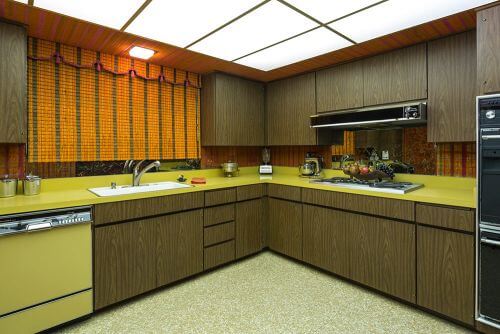 Also of interest — do you recognize anything familiar in the home’s kitchen? 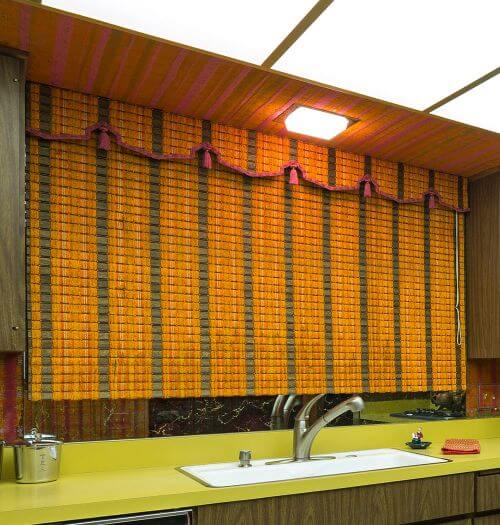 Why yes, it looks like those are some woven wood blinds, possibly originals from back in the day from our friends at Beauti-Vue!

Suffice to say: We love it. Fingers crossed the new buyers do, too, and don’t change a thing.

Tips to view slide show: Click on first image… it will enlarge on screen… click anywhere to move forward and look for previous and next buttons within photo to move back or forth… you can start or stop at any image: