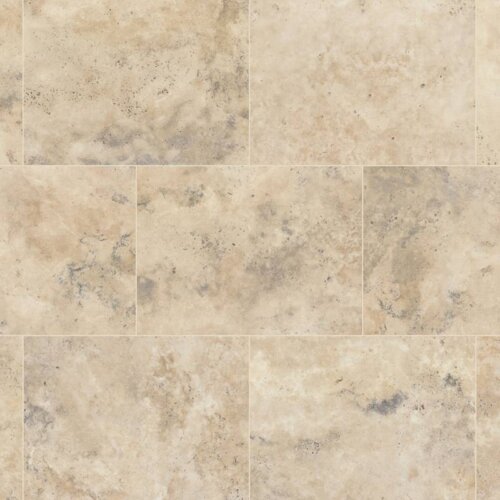 Writing about Amy’s Naughty Pine Lounge, I was reminded of how much I liked travertine. Amy has travertine laminate on her bar top. But, I think of this classic stone (online I find that travertine is a type of limestone) as more of a flooring option that you would see in fancy 1960s and 1970s homes. Carrara marble or carrara laminate countertops… Terrazzo (marble chip) flooring… Travertine flooring … and slate flooring … are four of the marbles/stones I think you’d most likely have seen in use back in the day. Above: Karndean has translated the look into large-format 18″ x 26″ Luxury Vinyl Tiles in two colorways. Vinyl: That’s so 1970s, too! I’m sure there are other travertine flooring options — either as resilients or actual limestone tiles — but here’s a start putting travertine out there!