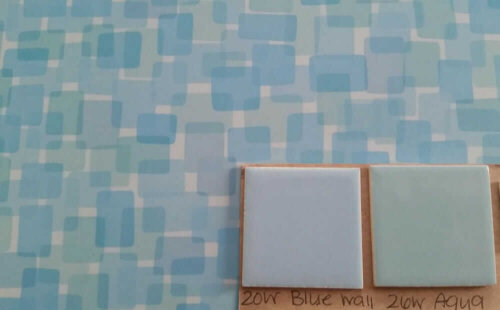 Julie wants our help: Which blue … or aqua … bathroom tile should she choose to go with the vintage Formica Nassau countertop laminate she’s salvaged? She’s building the bathroom from scratch, in the basement, so the sky’s — and sky blues’ — the limit. 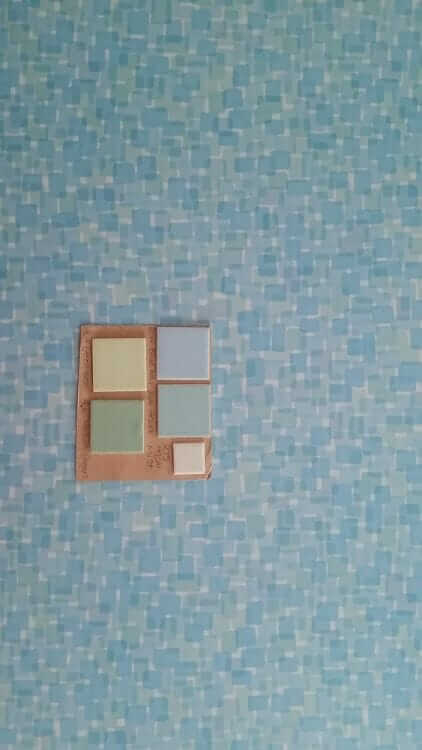 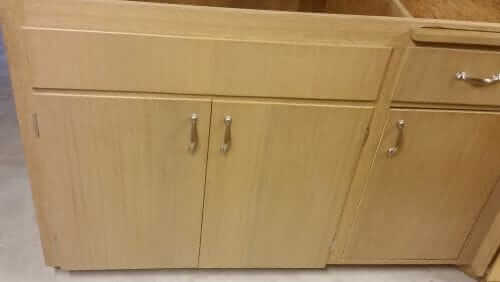 I’m about to start the biggest retro renovation of my life–finishing nearly 1000 square feet of basement entertainment space in a style appropriate to my 1959 house.  After months of searching, I found a mostly intact 1960 custom kitchen for sale on Craigslist two hours away, so I pounced.  The handy husband on the sellers’ end somehow got them out in good shape despite the unitized construction, and they are now safely in my basement waiting for construction to begin.  The plan is to use one 3ft section for a bathroom vanity and fashion a kitchenette from the rest.  The counter top pattern appears to be Formica Nassau, which I believe you thought was the pattern inspiration for Wilsonart’s Betty & Endora.  (Off topic: I recently put Endora in my pink bath and had actually purchased a sheet of Betty for use in the basement before it was discontinued [as stock laminate, note, you can still get it VDL-Pam]  I scrapped that plan once I got the real deal vintage version, but there’s definitely a resemblance.)

My dilemma concerns the tile for the bathroom.  I want to do 4×4 ceramic tile in the shower and about half way up the walls elsewhere in the room.  B&W has two colors (blue and aqua) matching the two different tones in the Formica pattern.  This seemed perfect at first, but now I’m not sure how it will all look together since from a distance the counters will appear to be something between the two colors.

I’m including shots both close up and from a bit further away of the tile samples on the counter. Can I do either/or?  Is one better than the other?  Would I be better off doing a white or salt & pepper tile with a few colored ones placed randomly instead?  The cabinets are blonde and the bathroom will be on the small side (6×10 including the shower) if that makes a difference.

Any advice would be much appreciated.

So I wrote back:

Thank you! AND: If you want to send me a photo of yourself, too, that would be great! Best, Pam

Awesome; thanks, Pam!  I was wondering which of the two colors to choose (or, as a third option, whether I should do a neutral tile and just randomly place a few blue or aqua ones).

As for floors, virtually anything is on the table at this point.  For the other areas, I am considering stained concrete or epoxy, both because these seem like highly durable options for a basement and because they wouldn’t eat into precious headroom.  Looking at photos of epoxy floors online, it seems like I might be able to mimic terrazzo or the glitter flooring in my pink bath, so perhaps that could be carried into the bathroom too.  But I also haven’t ruled out tiling the bathroom floor.  (I considered VCT too, but (a) I don’t want the maintenance hassle of stripping and polishing this much furnished square footage and (b) I have seen them ripped out after water damage.  My basement is dry, but we’re all just a freak storm / failed sump pump away, right?)  I’d love to know what others are doing for basement flooring; I’m out of my element having never done a basement before. 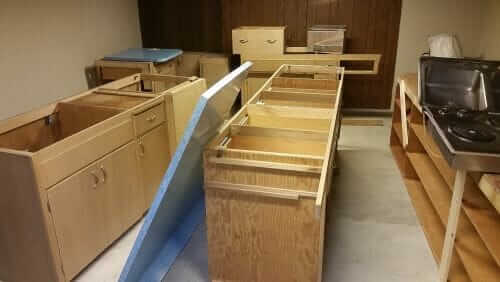 I am attaching a totally embarrassing photo of the current mess in my basement.  Maybe it will serve as a warning to those considering buying and storing an entire kitchen.  It’s . . . a lot.  The photo doesn’t show it all.  I have drawers and doors on the other side of the room, and one enormous L-shaped counter and cabinet are still in the garage waiting to be cut so they’ll fit down the stairs to join the rest of this mess.  I included a close up of one section, but it was tough to get a good shot–as you can see from the first photo, there’s very little room to get in between, and these things are *heavy* and tough to move. As you can see, the original cabinet pulls are gone.  I’m hunting for vintage chrome replacements, but the distance between the screws is 3.5″ rather than 3″, so it may take time. Back when I had given up hope of finding vintage cabinets, along with that sheet of Wilsonart Betty, I bought some beautiful 1950s dish knobs and back plates, thinking I’d have cabinets built.  Unless I find some giant round back plates to hide the two holes, it looks like I can’t use the dish knobs here, but I kind of feel like I deserve that for giving up too soon. 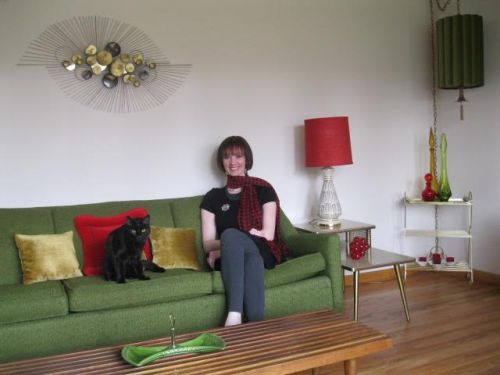 Also attaching the same photo of me you ran a couple years back with my pink bathroom story.  If the finished project turns out, I’ll have to get a better one taken in the basement.  🙂
Thanks again!
Julie

Pam responds: Which tile to use?

Like I said, fun question. My first reaction: I would want to also check for a wall tile that is the same value — intensity of color — as the strongest of the colors in your countertop. That would be: the Blue.

A worry bead with the B&Ws is that they are lighter than the strongest value on the countertop. I usually don’t want any single element in a room to “shout” — that is, be louder than its surrounding elements — unless that’s carefully planned.

I found this at Classic Tiles — it’s the Interceramic Blue: 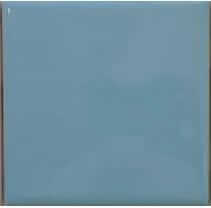 Of course, you’d have to get some samples to see for sure. But here’s what it looks like cropped into your mood board and indeed, it seems to be about the same as your strongest blue: 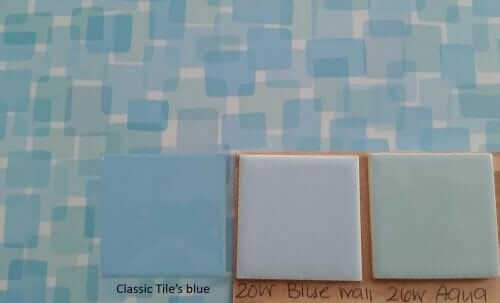 If you don’t gravitate toward the strong-powder-wedgewood blue tile look, I’d then say, without hesitation: Go with the B&W 26W aqua. I prefer it over the 20W blue (1) because I think it will give the bathroom a more definitive two-tone look, that is: blue + aqua = two distinct colors playing together; for some reason I’m not feeling the same playfulness or overall harmony if you were to use the 20W light blue with the Nassau. Again, this is likely due to 20W’s value: It’s too in the middle of the three colors within the Nassau pattern. Again, ff you want blue tile to coordinate with the Nassau, go with a blue that’s close to the strongest blue in Nassau.

I am not keen on the idea of salt-n-pepper tiles interspersed with the occasional blue or aqua solid tile. First and foremost, I don’t think that the salt n peps would do anything for your countertop — I’d go so far as to say they will ‘hurt’ the look, the patterns will not complement. MUCH better to go with solid tile.

I will also add: I’d likely torture the bullnose color too. White: I think that would be cheery, and it would pick up the white in your Formica Nassau. Solid: A more authentic 1960s choice.

Readers, what do you think?