What are you watching this weekend? Here’s what mesmerized me and my husband on Friday night: “Bathtubs Over Broadway“. This “comedic documentary” is a fascinating and uplifting account of one man — Steve Young’s — 20-year mission to collect — and then, to uncover the story behind — hundreds of almost-forgotten “industrial musicals” produced the 1950s, 1960s and 1970s. Young was a comedy writer for David Letterman for 25 years, so the documentary is chock-full of fun. Director Dava Whisenant was named Best New Documentary Director at the Tribeca Film Festival, where the film premiered. It began streaming on Netflix on May 9, or you can rent it on Amazon.

What is an “industrial musical”?

Retro Renovator-archeologists also will love the documentary because it’s another way of looking at the era we love: Industrial musicals were Broadway-quality productions financed by American manufacturers to inspire their sales forces at their big annual sales conventions. Albums were then produced as souvenirs and sent to the sales force as mementos of the event. As the prime example of this fascinating genre, “The Bathrooms are Coming” from American-Standard in 1969 is amazing — and Steve found and interviewed the original performers!!! MCM material culture history fans: You’re gonna love this! 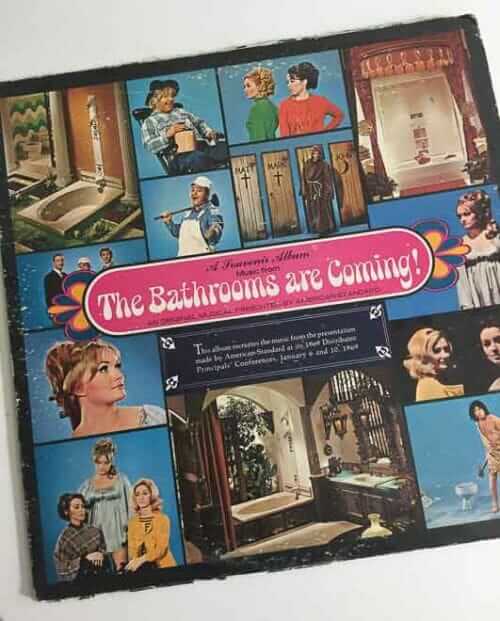 I actually have The Bathrooms Are Coming, which I bought on ebay years ago. Now I’ll be humming “My Bathroom” — Side 2, Track 3 — all day!

Watching the documentary, I learned that there are scores — hundreds, even — of these old souvenir albums from other productions. And, Steve Young also tracked down some of the productions that were captured on film — including The Bathrooms Are Coming!

Bathtubs Over Broadway is splendiferous <<and yes, that’s a real word!

….while gathering material for a segment on the show, Steve stumbled onto a few vintage record albums that would change his life forever.

Bizarre cast recordings – marked “internal use only” – revealed full-throated Broadway-style musical shows about some of the most recognizable corporations in America: General Electric, McDonald’s, Ford, DuPont, Xerox. Steve didn’t know much about musical theater, but these recordings delighted him in a way that nothing ever had….

First, there was the book, Everything’s Coming Up Profits:

And, you can buy the album from the book too — on the Amazon page, you also can listen to the first track for free — from a big Ford Tractor Dealer convention –“Golden Harvest (Music from Ford-I-Fy Your Future, 1959). (You know I love this, because I used to work for Ford, including when they still had Ford Tractor!):

I’d love to hear from readers: Did you watch the documentary? Isn’t it grand?!