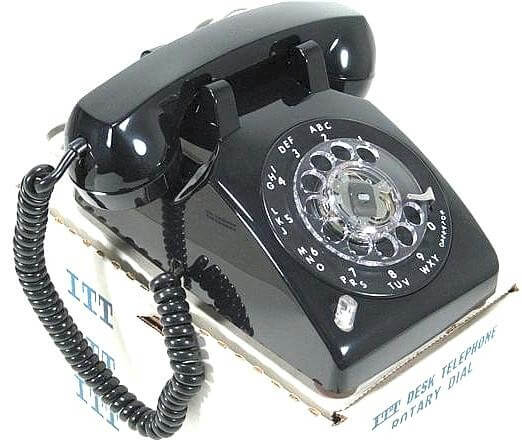 My basic goal right now in life is to know-all, see-all when it comes to mainstreet middle class mid century modern. So imagine my surprise and delight to bump into this source for new-old-stock mint-in-box rotary dial telephones — the real deal — while I was on a separate, very silly quest.

The site is frillfreephones.com – and they’re based not too far from me near Hartford, Connecticut. The owner formerly sold phones – but was stuck with inventory when digital arrived. There doesn’t seem to be a lot of stock left. I would buy one for sure…but I’m feeling poor from buying all kinds of great new marketing materials to feature on the blog. Boo hoo. But such is the cost of knowing all and seeing all. hehe.

We started selling phones and phone systems way back in 1977. In the mid 1980s, the business changed faster than we anticipated. People stopped buying basic phones, and we still had hundreds.

We didn’t give them away or throw them away; we just put them away.

But after two decades, what was old became new again.

People started asking us for old fashioned phones. We blew off the dust, unpacked the old cases, sorted and tested the phones, came back to the future, and set up FrillFreePhones.com in 2004.

As we’ve been selling off our own New Old Stock, we’ve been adding inventory from other sources, as they are discovered.