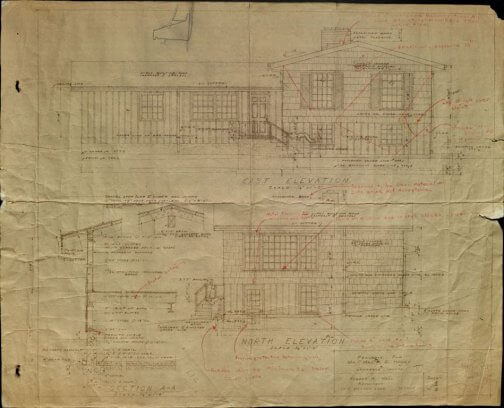 On the topic of found vintage objects that carry sentimental, nostalgic or otherwise useless but wonderful value, I’d like to include my own little story. About a year ago I was doing some work in our basement when I came upon a small box that contained the architectural plans to our 1955 split-level residence, which we purchased in the summer of 2007. The previous owners had left them there for us. A total of five tattered scrolls bore the faded traces of the house’s creation. These ghostly images, which I have since framed and hung in our den, have not only become useful for renovation projects but are, in a self-referential way, inspirational art objects unto themselves. But the story doesn’t end there. With the information I found on the drawings, I was able to track down the talented young man who designed it, Robert Hess, a retired architect now in his 80s and living in Santa Barbara. We have since become friends. Mr. Hess began his career here in Lawrence, Kansas after graduating with a degree in Architecture from KU. He quickly become sought after by professors and other people of means in the community who had a taste for what was commonly referred to then as “contemporary” architecture. His success and ambition led him to greener pastures in L.A., where he went on to design homes for wealthy clients in the entertainment industry as well as many others. Bob was part of the whole mid century modernist movement, and I feel priveleged to live in one of the homes he designed. If the owners hadn’t had the presence of mind to keep those old drawings all those years, I would likely have never known about, cared about, or perhaps even thought much about the back story of this house, the family that lived here, and the small part they played in this continuing saga we call America. For all those reasons the drawings have become a fascinating and valuable “found object” for me.