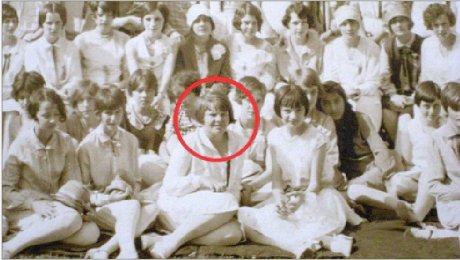 Meredith R. spotted her grandmother in this flapper photo…her entry into our Found Objects…Found Art contest.

I’m entering a panoramic group photo shop of some fetching flapper girls, one of whom is very, very special. I used to collect these group photos and was always looking for some to add to my collection. While thrifting one day about 10 years ago in a junk store in my home town of Austin, Texas, I gasped when I came across this one. Amongst all of the beautiful young women sporting short bobbed hairdos and flapper attire, I quickly spotted my grandmother, Libba Thompson, 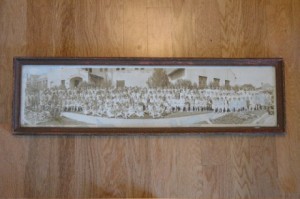 front and center left. This picture was taken by Judson Photo Co. in front of the “Scottish Rite Cathedral” on what is now Lavaca Street near the University of Texas Campus. There is no date on the photo, but we judge it to be taken in the late 1920s, early 1930s. 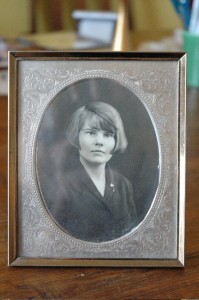 My grandmother, Elizabeth “Libba” Thompson, did participate in Scottish Rite activities when she was a single, young university student. Her father was a wealthy rancher in the time that led up to the great depression. I also possess Libba’s high school scrapbook where she recorded that her peers at graduation prophesied that she would be most likely to continue “driving around spending her father’s money.” I like to imagine that this picture represents that…Libba with all her flapper friends, running around on the UT campus, having fun, going to lunch, and shopping. This carefree time was short-lived for my grandmother. The great depression brought hard times and I know that she raised my dad alone while her husband was at war in the Pacific during World War II. For the past 3 years, it has had a prominent place right over the piano. Whenever we play, we have a great audience of attentive, beautiful flapper girls, one of whom we’re proud to say we knew personally.

I’m enclosing another photo, taken in the same era, to illustrate the likeness. Family members all confirm that this is my grandmother Libba. We’ve had a great time with this one.