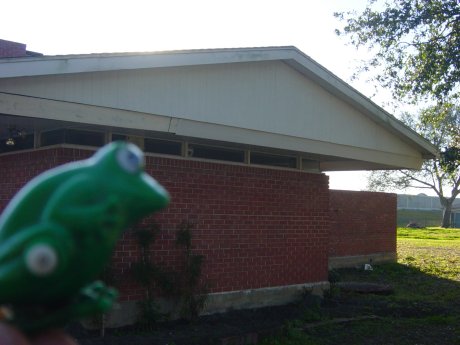 Adam’s house was flooded in Katrina. His entry into our Found Objects…Found Art contest is now part of his story…

The Magical Frog
Funny how some objects find us. This 1970s toy frog I discovered waiting in a junk bin for me, is just like the one I carried in my pocket as a child, bringing me so much joy till it broke in half and became just a small piece of plastic with a wiggly eye that I still carried, until my mom most likely made me toss him out. I told many of my playmates he gave me special powers, oddly they even belived it. After my house flooded in Katrina, I lost many of my collected momentoes. Yet finding this simple object, became more like a long lost friend returning to you with tons of of stories and forgotten memories, worth far beyond some of the items I been holding on to. I find it quite fascinating how  even the most mundane object can bring us places, return the joys of childhood and just serve the human spirit far beyond its intended purpose.

Heres ol froggy looking at the repaired part of the levie in my back yard, and froggy in front of the my mid mod house that I’m still trying to restore. Thanks all for letting me share my found object story, and thanks Pam for an awesome site to share it.