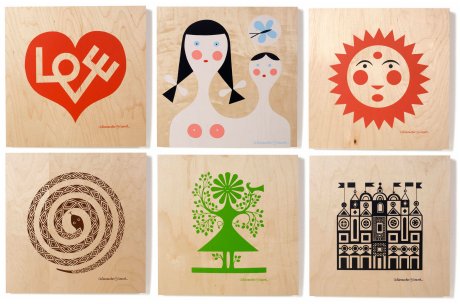 Are you looking for mid century art for a large wall space? How about these panels by Alexander Girard – who is widely considered the greatest colorist and textile designer of all time — and which have just been reissued. Combine all six 14″ x 14″ panels – and you will have quite a dramatic display for your 50s 60s or 70s living room, office or den. And, the wood for the pieces is formaldehyde-free – no off-gassing, folks. Looks like pricing is generally $89/panel at various online retailers.

From 1952 to 1973, Girard led Herman Miller”s textile division, where he brought color and life to the furniture creations of George Nelson and Charles & Ray Eames. As you can see from the panels, Girard used traditional folk art to infuse color, whimsy and humor into vibrant modern design.

Here is the complete information:

This project is a collaboration between Columbia and the estate of Alexander Girard to promote the sustainable, soy flour-based formaldehyde-free PureBond technology, and to highlight and expose to
a new market the timeless graphics of Alexander Girard.

Alexander Girard (1907 – 1993) created iconic mid-century modern designs for such companies as Herman Miller and Braniff International Airways. His work married the timeless lines of the modern with the
playfulness and bold color of Latin American folk art.

During his career, Girard developed many designs which were silk-screened onto wood panels. Some of these designs were used in the 1971 Herman Miller Action Office 2 system and on the walls of The Compound restaurant in Santa Fe, New Mexico.

The estate chose to work with Columbia Forest Products because PureBond is the only widely available formaldehyde free plywood panel. Girard had a long history of environmental concerns, especially about pollution, and PureBond technology offers a way to mitigate indoor air problems by eliminating the risk of toxic and carcinogenic VOC’s that can be released by composite wood panels made with urea formaldehyde resins.

PLYprints are being made available through specialty retailers of home fashion and art objects.

About Alexander Girard
Alexander “Sandro” Girard was one of the most innovative modern designers of the 20th century. From 1952 to 1973, Girard led that company’s textile division, where he brought color and life to the furniture creations of George Nelson and Charles & Ray Eames. Widely considered the greatest colorist and textile designer of modern time, Girard used traditional folk art to infuse color, whimsy and humor into vibrant modern design.

He was able to capture the essence of Latin America while still creating designs that were fresh and contemporary, finding the perfect balance of high and low art forms. In 2000 Girard was the subject of a
major retrospective at the Cooper Hewitt National design Museum, confirming his place in the pantheon of great mid-century designers.

Columbia’s decorative interior veneers and panels are used in cabinetry, furniture, architectural millwork and commercial fixtures. Employee-owned and based in Greensboro, North Carolina, Columbia
employs more than 2,500 and operates facilities throughout the United States and Canada, and an operational network which spans the globe.

PLYprints Concept
The PLYprints concept was developed in cooperation with Eric Pfeiffer of PfeifferLab, a San Francisco-based design and branding studio. PfeifferLab relies on Eric’s penchant for simplicity of form to create
useful and elegant solutions for everyday living. It’s this pure design ethos, coupled with a casual sensibility that results in timeless objects rooted in a deep understanding of materials and
message.