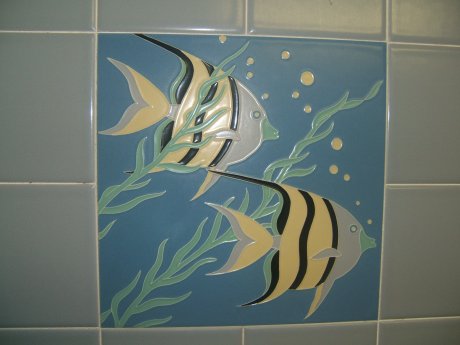 Hi Pam! This is the blue and grey bath in the mid-mod rancher I grew up in and recently inherited, in southern New Jersey. Thank you for renewing my appreciation for all things mcm (my intitials by the way!) The bath is all original except for the faucet on the sink. If anybody has any ideas for decorating, I’m all ears! One of my decorating issues is that the blue is very hard to match, so buying towels is a challenge. I’ve tried pink towels, but am not crazy about it. [Pam: how about medium blue towels to match the blue in the fish tile?] And yes, I’m planning on picking out some wallpaper. We moved in about 6 months ago and haven’t done much yet beside paint.

I’ll send pics of our knotty pine kitchen next!

When I asked Bungalow Bill about the tile, he quickly reported:

That’s an easy one. They were made American Olean, c. 1930-50’s. Many of the designs and inspirations of series such as those were originally from the Franklin Tile Company of Landsdale, PA and were incorporated into AO’s line when they merged with the American Encaustic Tile Company in the 30’s after the Depression. They made 8 inch tiles as features and 4.25 inch tiles to use as go-with’s / accents.

You can see tiles from other series on my site here and here. The middle and later period designs were made on a thin, dust pressed clay body. The earlier designs from Franklin were on a hand pressed thick faince tile body, giving them a hand made, Arts and Crafts period feel. You can see the earlier Franklin tiles by typing “Franklin” into the search box

I remember getting excited when I discovered an 8 inch pink flamingo tile from their series installed outside the bathrooms in the Mohawk Diner, one of those ORIGINAL big old shiny aluminum ones, on the way to the Berkshires in Mass.

Bill – thanks as always! Megan – beautiful bathroom, you don’t have much work to do. Those little fish tiles are a gift from the retro decorating gods – and give you a great starting point to choose additional decorative elements for the bathroom.