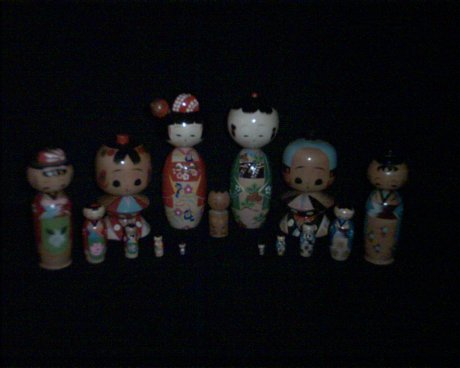 Kevin’s entry in our Found Objects Found Art contest has one of the most extensive stories yet about the meaning this collection brought to his – and his mother’s life – in postwar America.

What Goes Around Really Does Come Around

Kokeshi dolls are originally from Northern Japan.  Their defining characteristics include a handmade, intricately, hand painted body with no arms or legs.  They were often given as inexpensive toys to children. As interest and popularity grew, they were also given or sold to tourists.  In this story, the dolls, which served as childhood toys, also have more meaning.  Throughout my mother’s life, they have represented a dichotomy of two, very different countries, and her insatiable need to link their respective cultures.

During the early 1930’s, my mother was in the midst of living a wonderful, happy childhood.  She, and her two sisters, would frequently play games and engage in various outdoor activities.  However, during inclement weather, their dolls, especially Kokeshi, played an important role.  They loved to share amongst themselves; it was so easy to trade one for another, knowing their hastily-made decision could be reversed within an hour or two.

As the late 1930’s–early ’40’s approached, so too, did the significance of their Kokeshi.  While the war intensified, the number of air raids increased dramatically.  There was usually very little time to seek shelter.  Since my mother resided near an industrial town, the warnings sounded around-the-clock.  Eventually, it became nearly impossible to sleep in pajamas.  To decrease preparation time, especially at night, street clothes became the norm.  Throughout the war, my mother would partake in another consistent ritual.  During each air raid, she faithfully carried one or two boxed Kokeshi with her to the underground shelter.  Usually, it was the last set she received just prior to commencement of the war.  Her parents stated that, due to anticipated shortages of raw materials, she should treasure it.  From that day forward, my mother kept her new dolls carefully wrapped in their original box, as she clutched them tightly during each relocation.  I specifically recall her mentioning that it took one whole year of accumulating to provide enough sugar to make one special treat for their New Year’s festivities.  Needless to say, it didn’t take much to convince her to cherish the new dolls.

Years later, during the Korean war, my mother met an American G.I.  At a time when her interest in American culture was peaking, so too, was her love for a handsome, American gentleman.  To celebrate their love and passion for one another, they were married in Japan.  Soon thereafter, they had their first child.  They remained in Japan for several more years.  During this time, my mother’s infatuation with all things American continued.  She loved everything that was American…the people, the culture, social norms, etc.  She befriended many American couples at the armed services bases.  She wore unique American-style clothing and had hair to match.  What she could not obtain in Japan, she tailored herself.  Ironically, and somewhat eerily, she was even impressed by American Air Force power, and the B-29.  Though she regretted its ability to cause mass destruction, to her, it was a mighty, awesome machine. Thus, it was inevitable that she would one day move to America.  After overcoming mounds of insurmountable red tape, that day was realized in 1956.  My parents eventually settled into a new, 1958 ranch home.

Despite widespread societal rejection during the early years, my mother continued to embrace American culture.  She loved 1950’s design, music, fashion, etc.  Overall, she was pleased about the air of optimism that overtook the land.  Yet, in all her attempts to assimilate with American culture, she never forgot her own roots.  Her native country and its culture remained a dominant force throughout her life in America.  As children, we were inculcated with the best aspects of each culture.  There was always a balance between the two.

Regardless of country or culture, my mother was a huge proponent of quality education.  She received the best in Japan and would stop at nothing to ensure that her children also received a quality education. As each child entered elementary school, she was actively involved in monitoring the quality of teacher performance.  Though resources were scarce, she always rewarded each teacher.  In the early years, she gifted them with all of her new boxes of Kokeshi–including sets she purchased and brought just before leaving Japan.  Upon receiving this gift, one teacher was so impressed and intrigued, she contacted my mother, asking her to prepare a Japanese lunch for every student while explaining the cultural significance.  (Sushi was so unknown to Americans in the ’60’s, but luckily, I still received a good grade!)  A few years later, that teacher spent an entire summer visiting Japan.  She truly admired the country and its culture.

More years later, around the year 2000, I accompanied my mother to an air show.  Her love of the B-29 had never waned.  Fortunately, at this show, there was one of the few remaining B-29 planes, named “Fifi”.  My mother was ecstatic.  As we waited in line, a retired Air Force Colonel approached, then escorted us into the plane.  He took us for a private tour.  It was an amazing experience.  Rather than point fingers or display feelings of hostility, there was mutual admiration for both countries and its citizens.  The first words stated by the Colonel were: “I’m so glad you were safe and you’re here today”.  To show appreciation, my mother wanted to send a gift to the Colonel.  While shopping, she mentioned her desire to send a set of Kokeshi to the Colonel’s wife. However, after seeing how unappealing today’s dolls are, she felt so foolish for not keeping at least one set for herself.

This led me on a search with eBay.  I was surprised to see how many dolls were available, but, as toys, most had shown their age.  One day, however, I spotted a new set from the 1950’s–’60’s, still in the original box!  I couldn’t believe it!  I knew, then and there, regardless of cost, they would be mine.  As with all eBay purchases, I always send email messages to meet the seller, and, if possible, to obtain some history of the item.  Well, as my notes progressed, I discovered the seller of the new, old set was the elementary school teacher, retired for many years, and living in Japan.  Due to an illness, the teacher was selling most of her doll collection.  The teacher sent the dolls back to my mother, at no charge.  It was like a special Christmas day when my mother, surprisingly, opened the box of Kokeshi.  To thank the teacher, my mother was able to speak in Japanese with the teacher.

Since the recent passing of my mother, the Kokeshi dolls continue to add new meaning and significance to me and my seven siblings.  One look at the dolls and we are immediately reminded of all she did to assimilate herself and children into a new country, and how much she embraced America, while continuing her love for Japan.  Most importantly, her insistence on education.  All eight of her children have gone on to pursue a college education.  And, how ironic that the two, “nesting” Kokeshi also have eight children.  (The children have no patina because, throughout the years, they remained nested inside their parents.)  From the beginning to the end, my mother often stated:  “America is still the best country”.

Sometimes, what goes around really does come around!