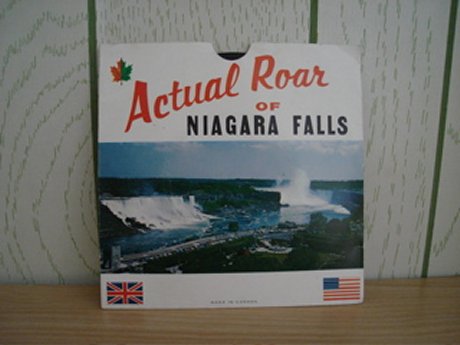 Thanks for posting all the interesting entries. Here are mine. I’m also including some pics of the other things that went with, just for kicks. It has to be something we acquired this year, yes?

This year I moved into my house. I happened to go to a garage/estate sale of the house before I knew I was going to buy it. (my friend bought what would have been “my” garden tools, ah!). I also happen to be obsessed with Niagara Falls. Randomly, someone helping out with the sale walked up to me, shoved this little 45 rpm record at me and said “look at this! Isn’t this funny?”  I told them how fantastic it was and asked how much. It took a couple of tries because they thought I was kidding. Finally they said, “If you really like it, you can just have it”. So I now own what belonged to the former owner of my house, and the little record that could did not have to move. 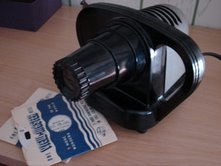 I have included (just for your edification) a picture of the Viewmaster Projector (fabulous!!!) that I bought at the sale for $1, and also a little dish?, ashtray? that I found after I moved in that the former owner (Elly) won, which I use as a spoon rest. These things make me think that I know her a little bit and that maybe she was a little bit like me. I don’t know, maybe liking those things in common makes me feel a connection to the house through her as she was here for many years.

Since you said we could enter two things, I have also included this crazy, useless, but totally hip cup that flashes different colors when you tilt it to drink that I got at a thrift store this summer. Mint in box, baby.

thanks!
Pat d from Rochester