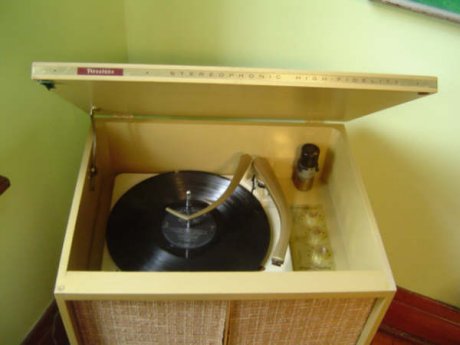 Tom’s entry in our Found Object Found Art contest is our final one – I think!

This is our final contest entry – I think. If I missed you, please email me, retrorenovation at gmail dot com. And get ready: Voting starts Sunday.

My found object is a little larger than many, but I believe it belongs in this contest because of its backstory (some of it real, but with a few blanks filled in by me).

I found this blonde-veneered, one-piece stereo hi-fi at an estate sale. It’s in pristine condition except for the fabric covering the speakers, which has separated from the plastic divider. The labeling says 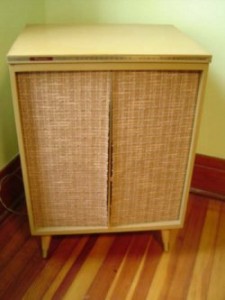 “Firestone Stereophonic High Fidelity”. The instruction booklet that came with the hi-fi has a sticker with the name “Firestone” superimposed over the original name brand, which, when you hold the paper to the light, you can see it says “Mitchell” underneath. I assume Mitchell produced the hi-fis and the Firestone tire dealers sold them as a private label.

A little background on where I got this: The estate sale was in an immaculate, 690-square-foot Cape in Cheektowaga, NY, a suburb of Buffalo. The home sits in a 1950s neighborhood of quaint capes & ranches and was originally a Polish suburb. This particular street looks pretty much the same as I imagine it did 50 years ago.. The original owner of the home, a widow, had recently moved to a nursing home, and according to the lady running the sale, the owner, her husband and daughter had moved into the house when it was new in 1953.

The house, which is the most basic of capes, sat virtually unchanged through the years. At some point in the 1980s, the kitchen received a new counter, stove & fridge, but everything else about the home – especially the furnishings – remained encapsulated in the 1950s. The home, which featured a living room, eat-in kitchen, two small bedrooms and a bath, never even had the attic finished into a bedroom like most capes here in Western New York. The house fit this family’s needs in 1953 and evidently never needed to be changed. The furnishings were sparse, so this hi-fi was probably a real luxury for the family when it was new.

In my mind, the father bought the hi-fi at the local Firestone dealer as a surprise for his teenaged daughter in the early 1960s. I can just picture the daughter listening to her 45s of the early girl groups or boy bands, maybe dancing with friends on the hardwood floor in the home’s little living room. Then I picture the parents sitting in their chairs in the evening listening to a polka record (of which there were plenty) or one of the Herb Alpert albums that my friend picked up at the same estate sale. There was no evidence of any other turntable – much less a tape deck or CD player – in the house, so I’m guessing this hi-fi was as advanced as they got here. The blonde veneer fit in perfectly with some of the other furniture, particularly one of the bedroom sets, which like the rest of the house, pretty much looked like it had come off of a 1950s furniture showroom floor. I treasure this hi-fi because the family obviously enjoyed it; they used it, yet kept it in wonderful condition, even saving the instruction booklet. And it still works today!

A side note: Pam, you would have gone NUTS over the original linoleum kitchen floor – deep blue cloudy base with what I call the “football field” lines crossing the floor every foot or so. My grandmother had the same floor in green. This house also had the most spectacular chrome-and-formica dinette set in deep blue. The chairs had the coolest bent tubular chrome legs I’ve ever seen. I just didn’t have $225 to spend on it.

Cheektowaga estate sales are always a treasure trove of mid-century furnishings, fun & funk. Rarely ever do I find any high end stuff, but you never know. And the homes are usually time capsules in themselves.

Thanks for considering my entry, Pam.