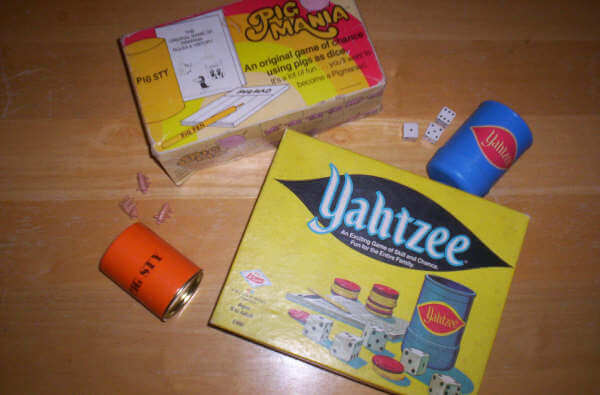 Now … our final entry in the Found Objects Found Art Contest.  Judi aka Sumac Sue”s tribute to those days when there were only three network TV stations – so we played games…

This is our final contest entry – I think.  If I missed you, please email me, retrorenovation at gmail dot com. And get ready: Voting starts Sunday.

Hi Pam. Here is my entry for the found objects contest. While I think there are other entries far better than this one… I want to contribute something to the contest, if only to show
how many different types of objects can appeal to us all.

My photo shows a couple of my favorite games, Yahtzee and Pig Mania. Yahtzee probably was played by Adam and Eve, it’s been around for so long.  I first played Pig Mania in the 80s, so I don’t think that game has been
around quite as long as Yahtzee. This particular Pig Mania game originally belonged to my parents, but, at some point it got passed to me. I found this old Yahtzee set at a yard sale a few months ago.

These two games represent the dozens of games my family played around the dining table over the years, a tradition that got started when my siblings and I were kids in the late 50s and into the 60s. My parents would have a game night with us at least once a week, and we would eat popcorn and drink Barq’s root beer  while playing Old Maid or board games often based on TV shows, such as the Concentration Game or Password. I was a terrible game player; I would get bored and quit paying attention, so I usually lost the game or got the Old Maid card. (I did pay attention when we played the Barbie game, because I did not want Poindexter as a date to the
prom.)

I always liked Yahtzee and Pig Mania because they are quick and easy to play. My Pig Mania game box still contains a few old score cards from past games with my siblings and our kids. And, this Yahtzee game contains a
score card showing that some other family was just like us — Dad, Mom, and Molly penciled in their scores when they had a game night.

Thanks Pam, for a great contest!