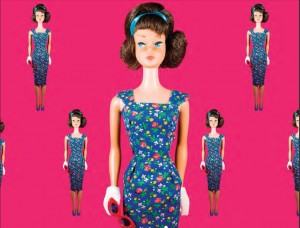 To celebrate the momentous occasion of Barbie’s 50th birthday – today, March 9 – I asked Pat Henry — my good friend and editor of Fashion Doll Quarterly — to talk about one of our favorite girls. Pat is uniquely qualified. Like me, she played incessantly with Barbies growing up in the 60s and early 70s. I played with my Barbies til I was at least 13. When I asked Mom for the convertible for Christmas I recall she was seriously concerned.

Pat took the whole thing even further – becoming a successful NY fashion stylist and now, editor of a magazine all about fashion dolls as well as a teacher at the Fashion Institute of Technology (FIT) in NYC.

1. Tell us about yourself, your magazine and your Barbie-expert credentials. 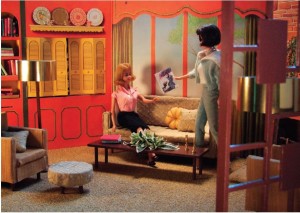 From the age of three, the only toy I was interested in was Barbie(TM) doll. By the time I reluctantly gave up my collection at thirteen, I had over fifty dolls that I had individually named and kept in pristine condition. Sadly, I gave them away, and I think perhaps that served as impetus to collect vintage dolls as an adult.

Barbie influenced my love of fashion and fashion photography, which led to a degree in Fashion Marketing at F.I.T. and my career as a fashion stylist. My mother, when asked what I actually did as a stylist would say, “She is still playing Barbies, they are just real now– but they still don’t eat.”

One day, shopping at FAO Schwarz for a baby gift, I became aware of the collector world, coming upon a porcelain reproduction vintage Barbie doll (a 1961 Bubblecut (hairstyle) wearing “Red Flare” a Balanciaga inspired red velvet coat and hat). My husband, seeing my excitement, went one better, buying me a vintage #3 ponytail Barbie for my birthday. He found the doll in an East Village store called Love Saves The Day, long before eBay and Yahoo collector groups were on the web. The thrill of the hunt, finding vintage dolls and clothes in antique shops and yard sales, became a fun hobby and an extension of my love of fashion. My Barbie doll collection was my personal miniature fashion museum of the fifties and sixties.

2. Barbie: So what role did she play in your life – that got you where you are today?

It was Barbie doll that made me love fashion and the fashion industry. I loved the glamour and travel that was part of the fashion model’s life. (Barbie’s original vocation was “Teenage fashion model”.) I grew up to be a fashion stylist, dressing real life “Barbies”, like my mother said. My experience working with some of the best fashion photographers in the world piqued my interest in photography, and I began collecting books on fashion photography. Once again, my husband picked up on my interest and bought me a camera. I had no formal training, but the things I learned standing next to photographers on a set gave me a sense of how to set up basic lighting and compose a photo. But I had nothing to shoot. So, the dolls became my models and the dining room table became the studio. We like to joke and call it “Industria North” (Industria is a well known photo studio in SoHo). 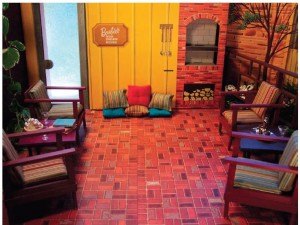 Finding a forum to share these photographs was a bit tricky because my style was more editorial than product driven, as most companies preferred to shoot the dolls, so there wasn’t much call for me to do this commercially. There were a few doll magazines on the market but they were very simple and collector driven, using collectors’ own photos. I wanted to recreate Vogue in miniature. So Fashion Doll Quarterly was launched five years ago. I had a great sense of satisfaction when we included in an article on Bratz for the Hollywood Reporter, and the journalist wrote, “FDQ invokes Vogue with its high fashion photography.” Having worked as the Bookings Editor at Vogue many years ago, that was a very gratifying thing to read.

3. Has Barbie used her power for good – or for evil? 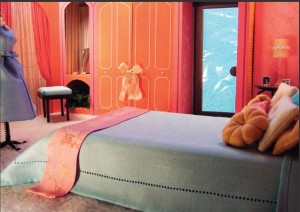 I think the more interesting question is whether pundits and marketers have used Barbie doll for good or evil. Barbie doll is still a toy for children. There are high-end collectible versions specifically for adults, and there is a huge cottage industry of independent artists who use Barbie as muse, but “she” doesn’t have much say in the matter, does she?

I have always found it odd, if not downright confounding, that certain feminist writers think Barbie is “dangerous”, or that a plastic toy leads children down a path of destructive behavior or eating disorders. Barbie is the ultimate feminist. She owns the Dream House, the car, the country cabin, the airplane and the recording studio. It’s about her and her friends, her ambitions. She is the college graduate, doctor, veterinarian, archeologist, President of the United States. Ken is the accessory. She never officially married or had children. If that doesn’t tell a young girl that she can do everything herself, and as well as any man, I don’t know what does.

Like Madonna, Barbie has become a touchstone for our pop culture. She reflects the zeitgeist of any given time, through her constant reinvention. Barbie was reinvented and revamped back when Madonna was just a “Skipper”. We respond to Barbie doll based on our own comfort, or discomfort with what is being presented. As Barbie doll has transitioned into a world famous product with global awareness (three Barbie dolls are sold every second), she transcends debate and takes on iconic status, like Frank Sinatra, Elvis and Marilyn Monroe. And, of course– Madonna.

4. Tell us 5 things about Barbie that we might not know.

5. What do you think that Barbie has taught us about ourselves – as women, men and a nation. 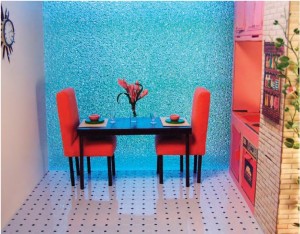 The Barbie doll is one of the world’s best-known products of all time, like Coke and Kleenex. Johnny Depp was recently quoted about enjoying time with his daughter sitting on the floor “playing Barbies”. Her name has become a generic term for all dolls, as well as a derisive term regarding any woman who wears too much make-up or has fake breasts. She has been the favorite toy for several generations of children who have been saturated with pop culture, celebrity and instant gratification. But you cannot discount the doll’s influence in creating communities of collectors who share each other’s company, creating charities and educational programs, and releasing their inner artist, using the doll as the medium. She has also informed three generation of women on how to navigate the world as an independent thinker and doer. The slogan for Barbie is “We girls can do anything”. She a small plastic mirror to who we are at any given time.

6. Do you still play with Barbies? 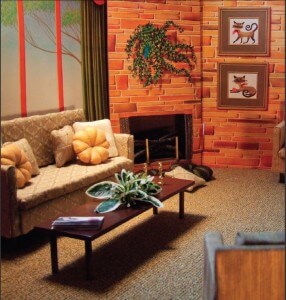 In the sense that I work with the dolls as models and subjects, I would say yes. But now that covering the Barbie line and Barbie collectors is part of my business, Barbie doll is also a client. A few years ago, I had the chance to visit Mattel and see their design offices and photo studio, and the three-year old in me was beyond excited. But the adult magazine publisher got a pretty big kick out of it, too!

Barbie doll’s official birthday is March 9th, the day she was officially presented at Toy Fair in 1959. Coincidently, this is Beatrice Alexander’s birthday, also known as Madame Alexander, the founder of the well known doll company based in Harlem. It’s a big day for small dolls.

Thank you, Pat, and Maryann, for your great generosity in sharing!