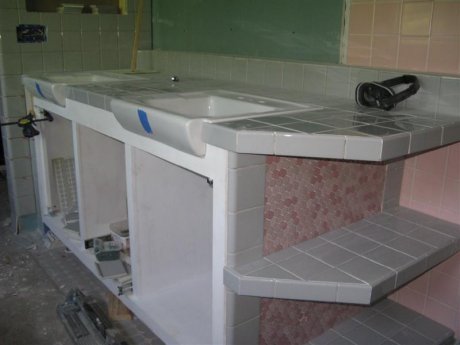 SCATHING JANE IS READER OF THE YEAR — not because she has one of the most adventurous retro renovations under way (which she does), but because virtually each and every day she scours Craigslist nationwide and puts all kinds of neat stuff onto the Forum (now defunct). Steel cabinets, yes, but also tons of Bathroom Stuff, in particular. She also sends me lots of great tips, directly – she’s become very studied in knowing when there’s something wicked good I need to see. Jan has recently sent me lots of photos of her projects and for today let’s look at: her bathroom. 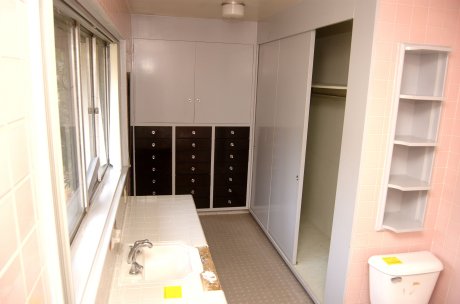 It looks like Scathing Jane’s original grey bathroom is a really nice size, and had some great tile work. But, she wanted to reconfigure and raise the vanity, add a Cinderella tub, move some stuff around — and add pink to the mix. She found new/old tile-in sinks… new tile to mesh with the old… and that cool square tub. Here are a few of her comments:

Finally, Jane wants to be sure to credit her long-suffering spouse.  “I found the house, but he said ‘This is the one!’  He provides muscle and moral support (and sometimes grumbling laced with choice adjectives.…)” she says. Don’t they all, Jane. Don’t they all.

More from Scathing Jane to come. Readers, many many of you have sent me photos and stories over the past few months. These are the most time-consuming for me to configure into posts and, yes, my life has been a three-ring circus. Life has not gotten any less circus-y, in fact, someone lit some hoops on fire. But sunshiney summer and lots of recent notes from readers have given me boundless energy and I am attacking all your emails like a demon…reader-blitz in progress. 🙂 Happy Monday.