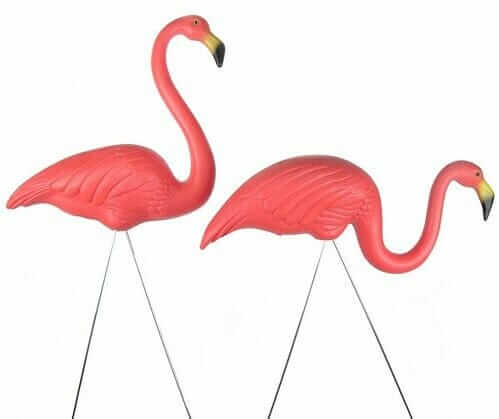 NO DISCUSSION OF MIDCENTURY LANDSCAPING IS COMPLETE without including the famous pink flamingo lawn ornaments designed by Don Featherstone. According to my online research, Featherstone is an artist who sculpted 750 products for Union Products, Inc., in Leominster, Mass., starting in 1956. He sculpted the iconic pink flamingos in 1957. They were based on National Geographic images, and they went on the market in 1958. The taller one is 30″ tall when staked into the ground.

Yes: Featherstone flamingos are still available today! They seem to have been in continuous production since 1958, with just one yearlong gap in 2006-2007.

Get them on Amazon of course>> Featherstone flamingos here. (affiliate link, yes, you click & buy, I make some moola)

In 1987, Featherstone inscribed his name on the original molds, in order to differentiate them from knockoffs. Today, all the authentic reproductions being made will still have Featherstone’s signature molded into them. You can buy them for sale on Amazon — look for the ones by Union Products … they come in a pair… Don Featherstone’s name is on the box.

Featherstone actually rose to lead the company. He retired in 2000, and continued to reside in Fitchburg, Mass. — with 57 of his flamingos on his front lawn. Also, Wikipedia says that he and his wife have dressed alike for their entire marriage.

Don Featherstone died in June 2015. He was 79. The tributes poured in. His hometown newspaper, the Fitchburg (Mass.) Sentinel & Enterprise wrote a lovely, lovely story.  The New York Times put his story on the front page. Rest in serene peace, Don Featherstone.

Unfortunately, Union Products closed in 2006 – but fortunately, a year later a company named HHC International purchased the famous flamingo molds. Last I read, it produces from them today in Westmoreland, New York. There was a ton of news media attention on this story at the time. 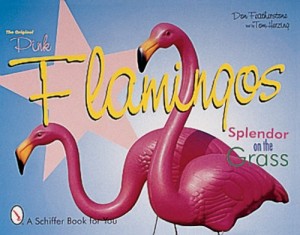