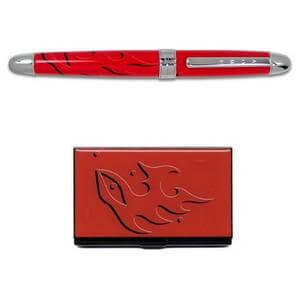 Finishing up my Timo Sharpeneva miniseries, Unica Home says that, “The Shaman rollerball pen & business card case was designed by Timo Sarpaneva for Acme Studios. This was a packaged set that never received extensive distribution. Sarpaneva died on October 6, 2006, and Unica Home has acquired the very last of these card cases and pens. You’d best snap one of fast because once they’re gone, there won’t be any more.”