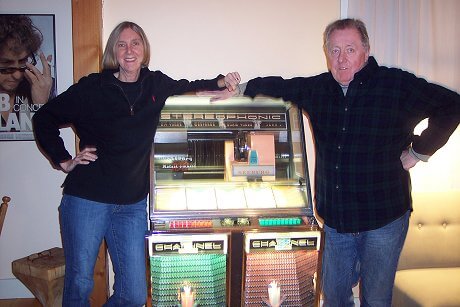 Here is something to truly lust after: A vintage Seeburg juke box. It belongs to my friend Kaarin and her husband Bob. They own Berkshire Books in Chatham, New York, specializing in used, rare and out-of-print books. If you are ever in the area you should be sure to stop there, they really know their stuff. Of course, literate types they are, the juke box has a great story…which includes a finicky predecessor, an undertaker-turned-repairman, and ill-made Russian vacuum tubes ordered by the caseload. Kaarin writes: 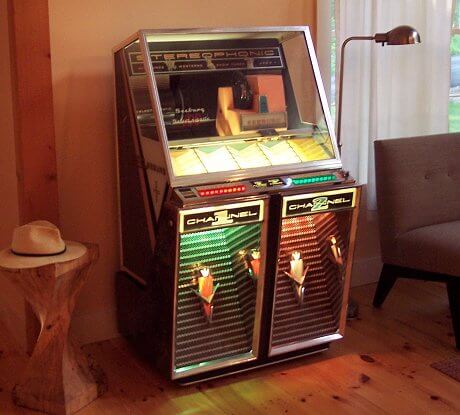 Here’s my partner, Bob, with the skinny:

When we lived in Salem Mass in 1979-1980  we often  visited Kaarin’s home town, Amesbury, Mass, and would go to  a funky bar owned by a man named Victor Bronski. Vic had an AMI -Rowe juke from the 1950s in his bar that had been retro-fitted after WW2 from a 78 rpm player to a 45 rpm. One night we asked– for at least the 10th time– if he would consider selling it to us… and on that night,  he finally did…for  $50.

The problem was that it never really worked 100%, and we subsequently moved with it from Salem MA to Cambridge MA, and finally to NYC. We actually had a juke repair man, one Jed Levine, in Salem and Cambridge, who used to talk to it in the most intimate terms when he worked on it,  but to no avail:  He could  never quite get “her” to work.

When we bought our house in Spencertown, NY in 1989,  we yet again, lugged  the old juke along with us… and *finally* found a jukebox repair man (a former undertaker!) in Binghampton NY who could, and did, fix it for us. However, the ongoing problem was that it was powered by vacuum tubes — only available in Russia these days — so we had to buy vacuum tubes by the case, and at least a third of the tubes were defective.

One day we got a call from our man in Binghampton saying that he had a mint Seeburg which he would be willing to trade for our AMI. (Our guess is that he’d grown tired of repairing the old girl.) And  the rest, as they say, is history. We used a little nest egg from K’s mother when she passed away to take the plunge and purchase the Seeburg (Florence Lemstrom loved to dance and we knew she’d approve!) and for the past three years have been in absolute Jukebox bliss. As we do every holiday season, we’ll fill her up with Christmas 45’s and jingle bell, jingle bell, jingle bell rock, the whole season long.