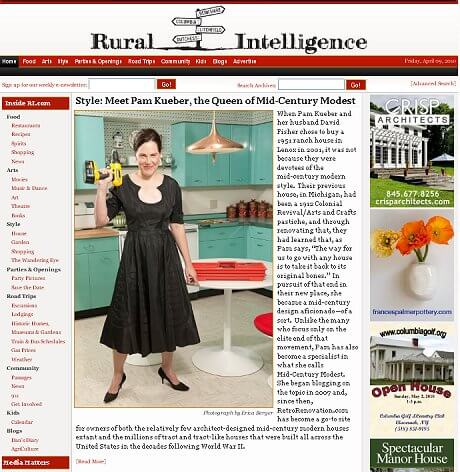 This past week, the concept of “Mid-Century Modest” was showcased on Rural Intelligence, a wonderful blog that reaches a diverse audience in the Berkshires, where I live, as well as Columbia County, New York, and over into Connecticut.  When editor Marilyn Bethany emailed me about doing the story, I asked if she wanted to come up for a coffee klatsch in the aquamarine kitchen, and she did!

Not only did we have a great time and talk and talk and talk — about mid-century design and blogging, both —  but she seems to be a #1 fan of the Mid-Century Modest Manifesto. She told me about an amazing documentary she had seen about the GI Bill and how it transformed America. It also really deepened her understanding of the period and of folks’ deep connections to their homes, she said. I need to email her and get the name of the documentary for all of us to share.

It is so nice to be featured, and to see Mid-Century Modest get this visibility. Honestly, I’m a little wiggly about being called “Queen.” How about “Queen Bee” — recognizing that it’s you all doing all the hard work on your houses (I’m mostly done)!

Thank you, Marilyn, and Rural Intelligence.