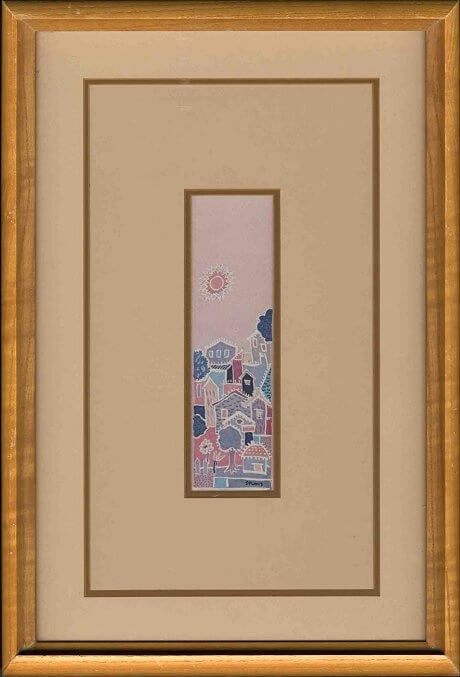 I bought myself a little present: A Harris Strong print called “Bridge Hill” that features little boxes on the hillside little boxes full of ticky tacky… I couldn’t resist, because little boxes are my particular weak spot.  Over the past few months I have grown quite fond of Harris Strong. I stumbled onto his work looking at vintage decorative tiles on ebay….
That’s what he is most famous for, I think. The tiles are quite lovely… but at $150 and up, a tad pricier than than this $49.95 print …. not an “impulse purchase.”  In addition to having produced wonderful art, Harris Strong also had a wonderful, almost prototypical mid-century background: He was born in Waukesha, Wisconsin in 1920. His aunt owned a greeting card company, and that influenced him to become an artist. He also had a strong scientific bent, so he was meticulous about the “engineering” of his tiles, which featured many innovations when competitors were creating “pie plates,” in his own dismissive works. During the war, he was a cryptographer. Afterward, he studied ceramics at NYU and later, he business really took off. He had showrooms in Chicago, New York and Tokyo… he created a 30′ long ceramic tile mural for the Waldorf-Astoria in NYC… and one friend says he was the first to ever show art at a home furnishings show. He loved, and sang Gilbert & Sullivan, collected stamps, and played bridge. In 1970, Strong relocated to Trenton, Maine, but after a fire destroyed his glazes developed over 20 years, he shifted his focus to prints, seriagraphs, woodcuts, etchings, engravings, collage and paintings. Strong died in 2006. He was quite a guy. I am not sure what you would call my piece… a print, I think? I don’t really care. I just buy little somethings that I like.